Does the Universe go on Forever?

Is outer space finite or infinite? Explore this age-old question. 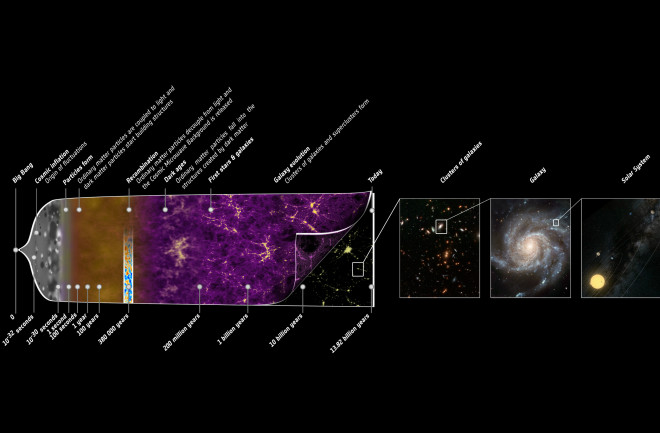 This illustration summarizes the almost 14-billion-year-long history of our universe. (Credit: NASA/JPL-CalTech)

First, it’s still possible the universe is finite. All we know for sure (mostly for sure) is that it’s bigger than we can observe, essentially because the farthest edges of the universe we can see don’t look like edges. The observable universe is still huge, but it has limits. That’s because we know the universe isn’t infinitely old — we know the Big Bang occurred some 13.8 billion years ago.

That means that light has had “only” 13.8 billion years to travel. That’s a lot of time, but the universe is big enough that scientists are pretty sure that there’s space outside our observable bubble, and that the universe just isn’t old enough yet for that light to have reached us.

(In a fun twist, the universe has expanded since the Big Bang, so the objects that we see emitting light 13.8 billion years ago are now some 46 billion light-years away.)

A few generations of telescopes — COBE, WMAP, and Planck — sought to understand the shape of the universe. Was it curved like a ball, or flat like a piece of paper? If it were curved, and if we could measure the curve, we could work out the size of the universe.

But all three telescopes say the universe is flat, which tells us nothing about the size of the universe.