An experiment tested whether the phenomenon holds up in a quantum computer simulation. 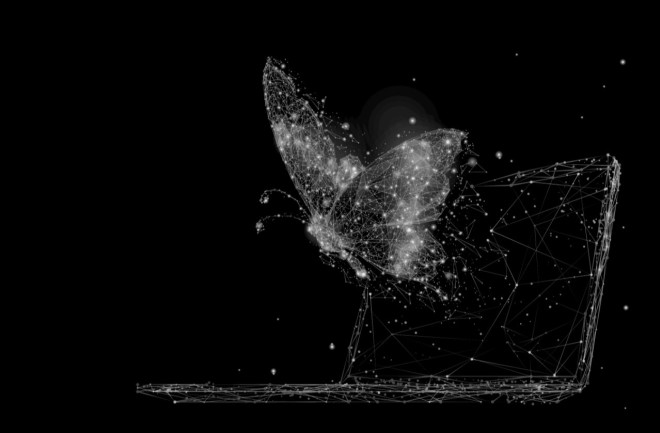 In “A Sound of Thunder,” the short story by Ray Bradbury, the main character travels back in time to hunt dinosaurs. He crushes a butterfly underfoot in the prehistoric jungle, and when he returns to the present, the world he knows is changed: the feel of the air, a sign in an office, the election of a U.S. president. The butterfly was “a small thing that could upset balances and knock down a line of small dominoes and then big dominoes and then gigantic dominoes, all down the years across Time.”

This “butterfly effect” that Bradbury illustrated — where a small change in the past can result in enormous future effects — is not reserved for fiction. As the famed mathematician and meteorologist Edward Lorenz discovered by accident, natural systems do exist in which tiny shifts in initial conditions can lead to highly variable outcomes. These systems, including weather and even how fluids mix — are known as chaotic. Chaotic systems are normally understood within the realm of classical physics, which is the method we use to predict how objects will move to a certain degree of accuracy (think motion, force or momentum from your high school science class.)

But a new study shows that the effect doesn’t work in a quantum realm. Two researchers at Los Alamos National Labs in New Mexico, created a simulation where a qubit, a quantum bit, moved backwards and forwards in “time” on a quantum computer. Despite being damaged, the qubit held on to its original information — instead of becoming unrecognizable like the time traveler’s world after he killed the butterfly. In the study, the process used to simulate time travel forwards and backwards is known as “evolution.”

“From the point of view of classical physics, it's very unexpected because classical physics predicts that complex evolution has a butterfly effect, so that small changes deep in the past lead to huge changes in our world,” says Nikolai Sinitsyn, a theoretical physicist and one of the researchers who conducted the study.

The finding furthers our understanding of quantum systems, and also has potential applications in securing information systems and even determining the “quantum-ness” of a quantum processor.

Not Quite an Alternate World

The rules of the quantum realm, which explain how subatomic particles move, can be truly mind-boggling because they defy traditional logic. But briefly: Particles as small as electrons and protons don't just exist in one point in space, they can occupy many at a time. The mathematical framework of quantum mechanics tries to explain the motion of these particles.

The laws of quantum mechanics can also be applied to quantum computers. These are very different from computers we use today, and can solve certain problems exponentially faster than normal computers can because they adhere to these completely different laws of physics. A standard computer uses bits with a value of either 0 or 1. A quantum computer uses qubits, which can attain a kind of combined state of 0 or 1, a unique characteristic of quantum systems — for example, an electron —  called “superposition.”

In a quantum system, small changes to qubits — even looking at or measuring them — can have immense effects. So in the new study, the researchers wanted to see what would happen when they simulated sending a qubit back in time while also damaging it. Researchers constructing quantum experiments often use the stand-ins “Alice” and “Bob” to illustrate their theoretical process. In this case, they let Alice bring her qubit back in time, scrambling the information as part of what they call “reverse evolution.” Once in the past, Bob, an intruder, measures Alice’s qubit, changing it. Alice brings her qubit forward in time.

“So normally, many people believe that if you go back in time, and scramble the information, that information is lost forever,” says Jordan Kyriakidis, an expert in quantum computing and former physicist at Dalhousie University in Nova Scotia. “What they have shown in this paper is that for quantum systems, that under certain circumstances, if you go back in time, you can recover the original information even though someone tried to scramble it on you.”

The Flap of a Butterfly’s Wings?

So does this mean that the butterfly effect doesn’t exist at all? No. Sinitsyn and his coauthor, Bin Yan, showed it doesn’t exist within the quantum realm, specifically.

But this does have implications for real-world problems. One is information encryption. Encryption has two important principles: It should be hidden so well that no one can get to it, but who it was intended for should to be able to reliably decipher it. For example, explains Kyriakidis, if a hacker attempts to crack a code that hides information in today’s world, the hacker might not be able to get to it, but they could damage it irreparably, preventing anyone from reading the original message. This study may point to a way to avoid this by protecting information, even after it’s damaged, so the intended recipient can interpret it.

And because this effect (or non-effect) is so particular to quantum systems, it could theoretically be used to test the integrity of a quantum computer. If one were to replicate Yan and Sinitsyn’s protocol in a quantum computer, according to the study, it would confirm that the system was truly operating by quantum principles. Because quantum computers are highly prone to errors, a tool to easily test how well they work has huge value. A reliable quantum computer can solve incredibly complex problems, which have applications from chemistry and medicine to traffic direction and financial strategy.

Quantum computing is only in its birth — but if Yan and Sinitsyn’s quantum time machine can exist in a realm usually saved for subatomic particles, well, the possibilities could be endless.