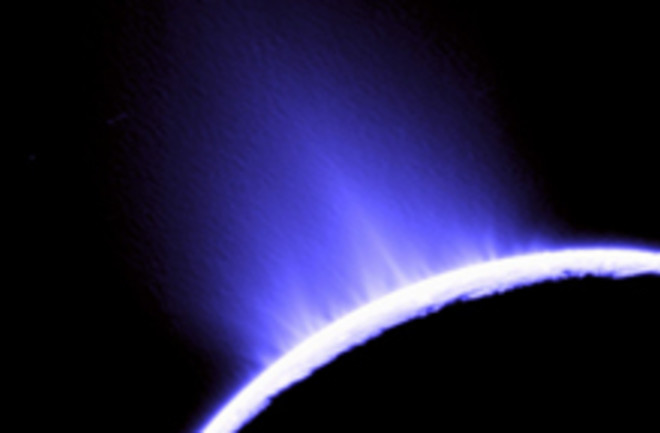 Saturn's moon Enceladus got humanity's attention in 2005 when surprised astronomers detected jets of ice and gas spraying out from the moon's icy surface, and since then researchers have eagerly investigated the possibility that the jets might emanate from liquid oceans beneath the frozen crust. A moon with liquid water would be of great interest, because it would be more likely to host extraterrestrial microbes. Now, two new studies with somewhat contradictory results have deepened the mystery of what lies beneath Enceladus's shell of ice.

Both groups of researchers were looking for sodium near Enceladus; one found it, the other didn't. Sodium is interesting because it indicates that deep under the ice, liquid water has been in contact with rocks, which leach salts [ScienceNOW Daily News].

The dissolved sodium, along with water, would be shot into space in the geysers, and some of the sodium would be trapped in ice crystals as they formed. The first research group found sodium traces in Saturn's E ring, a wide band of ice particles that is believed to be replenished by Enceladus's jets.

“Those salty grains provide our current best smoking (or steaming) gun pointing to present-day liquid water near the surface of Enceladus” [Wired.com]

, wrote space scientist John Spencer in an essay accompanying the findings. But the second of the twostudies, both published in Nature, had less encouraging results: Researchers

could detect no sodium vapor in the vicinity of Enceladus while searching for sodium's distinctive glow through large ground-based telescopes. [Experts say] this is not evidence against liquid water, but only that the plumes are not explosively boiling off a salty ocean and escaping through the cracks. Otherwise, abundant sodium would show up as vapor [ScienceNOW Daily News].

There are some scenarios that would fit with both findings. Enceladus could have a deeply buried ocean that's close to the moon's rocky core, and water from that ocean could be slowly

evaporating — releasing pure water as a jet of steam and leaving the salty residue behind [Nature News].

But there are also explanations that leave out water all together. Geologist Susan Kieffer has suggested that Enceladus may have reservoirs of clathrates--icy lattices that trap molecules of gas.

As tectonic plates in the crust move and collide, the crust fractures and these clathrates release gases, which carry up ice particles with them to form the icy plumes. These ice particles could carry up salt as well.... "Sodium isn't the proof of a liquid ocean," she says [Nature News].

Researchers will have more chances for up-close observations of the enigmatic moon over the coming years, as the space probe Cassini

will be flying by the moon at least four more times by mid-2010, and could make as many as 12 fly-bys before 2015, if NASA extends its mission [Wired.com].