I love science fiction, and I love SF art. I particularly like concept art: drawings made of equipment, aliens, and gadgets done by artists as ideas to work form to make for the show. In general, the drawings are far cooler than what actually gets built. The BBC just put up Doctor Who concept art from Series 3. It's totally cool.

Case in point: Gallifrey, the Doctor's homeworld. It's long gone, destroyed in a war with the Daleks, but the scene where he describes it (together with Murray Gold's fantastic music) really converys an emotional message. The concept art does as well. 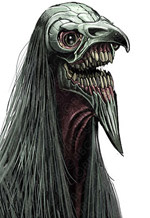 I liked the Shakespeare episode, but if the Carrionites had looked like this, that show would have been even cooler. 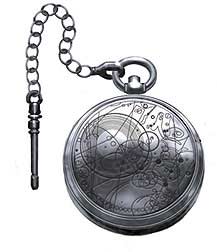 I can't help but think this drawing is accurate enough for people to make knock-off chamaeleon arch pocket watches. I'd buy one.

Tip o' the sonic screwdriver to io9, though I had seen some of these before.