Modern day physicists use massive detectors to seek out hypothetical particles. But in days gone by researchers have used other creative methods to track down their subatomic quarry. 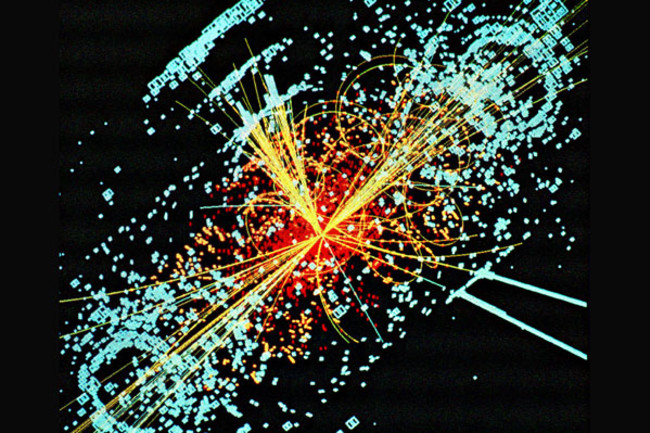 Using the world's most powerful particle accelerators and sophisticated detectors, physicists are searching for traces of the Higgs boson, the particle that could help us understand how the universe got its mass.

Fermilab's Tevatron and CERN's Large Hadron Collider are the front-runners for finding this last missing member of the particle family, as described by physicists' Standard Model of the particle world. In July 2010, the Tevatron found another clue, narrowing the expected range of the hypothetical Higgs boson's mass. Meanwhile, researchers at the LHC, the younger but more powerful of the accelerator pair, announced that it rediscovered in just months particles that previous detectors had taken decades to find. CERN's Director-General Rolf Heuer said: "Rediscovering our 'old friends' in the particle world shows that the LHC experiments are well prepared to enter new territory.... Now it is down to nature to show us what is new."

But how did physicists first make these particles' acquaintances? Here are several proven techniques for would-be particle hunters. 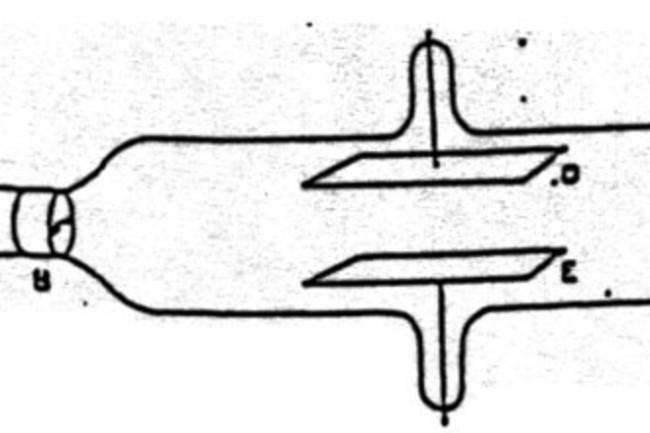 Though the Large Hadron Collider accelerates particles underground in a 16-mile, circular racetrack, particle hunters did not always require such giants.

J.J. Thomson drew the diagram above of a glass vessel, his modified version of what researchers called a Crookes Tube, and used the tube in a series of experiments conducted in the 1890s at Cambridge University's Cavendish Laboratory. Thomson wanted to study "cathode rays," one of the mysteries of 19th century science. In this tube, the cathode rays would pass from the cathode (marked c on the diagram) to the oppositely charged anode (marked a) like water flowing downhill. By creating an electric field between two metal plates (d and e), Thomson altered the stream's path and recorded where the rays struck the end of the tube. For this diversion to work, the ray had to have electrical charge.

By first showing that electric fields could alter a cathode ray's course, and later measuring how much the ray bent in magnetic fields, Thomson argued that cathode rays were divisible streams of charged particles. Today we call those particles electrons. 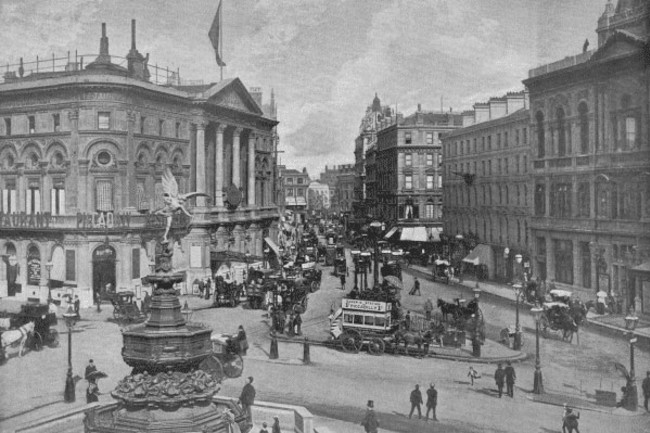 Unlike the electron, no electric field could deflect the particle Ernest Rutherford predicted in 1920. The hypothetical neutron had no charge. Rutherford allegedly said that the key to finding the particle was to think of it as an invisible man passing through London's crowded square, Piccadilly Circus: "His path can be traced only by the people he has pushed aside."

Rutherford's student James Chadwick seems to haven taken this advice to heart. He investigated the mysterious "radiation of beryllium" seen when scientists struck beryllium with energetic particles. He thought the radiation was neutrons that had been set loose, but others guessed that that it might be gamma radiation--a more energetic version of X-rays.

Chadwick bombarded paraffin wax with the beryllium's radiation, and noted the detectable, charged protons that emerged from the paraffin. He argued that even gamma rays didn't have enough energy to free protons. In 1932 Chadwick published his results (pdf), confirming not only that the beryllium was indeed emitting neutral particles called neutrons, but also that the neutron's mass was about the same as the proton's. 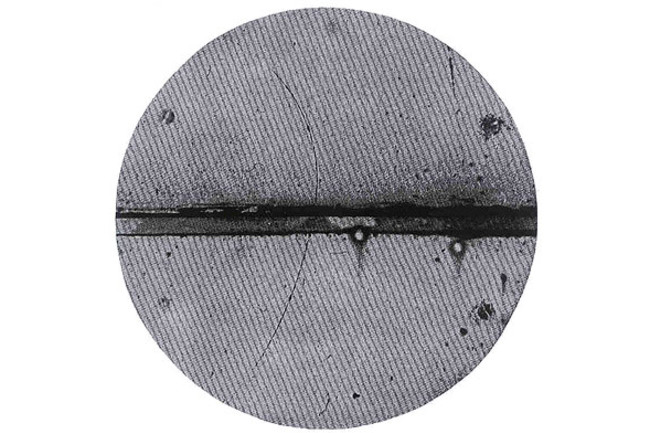 Thomson's cathode ray-bending is a common particle hunters' trick, since particles' paths are key for identification. In fact, in 1927, C.T.R. Wilson shared the Nobel Prize in physics for inventing a new tool to observe these paths: the cloud chamber.

A basic cloud chamber contains vapor just on the verge of condensing into a liquid. When a charged particle races through the chamber, it ionizes vapor molecules--turning them into attractive condensation hot-spots. The resulting liquid droplets form a visible trail along the charged particle's path.

In 1932, Carl D. Anderson used a cloud chamber to investigate recently discovered extraterrestrial radiation called cosmic rays. By noticing the curve of a particle's path in a magnetic field, Anderson discovered a "mirror" version of the electron--a particle with the electron's mass, but an opposite charge. This particle was later dubbed the positron, the electron's antimatter pair. Later, Anderson would also use the cloud chamber to discover another particle from cosmic rays, the muon, an electron's heavier (and, at the time, completely unexpected) relative. "Who ordered that?" Nobel Laureate I.I. Rabi famously asked regarding the muon discovery.

The photograph above shows a positron's path traveling through a cloud chamber as photographed by Anderson. 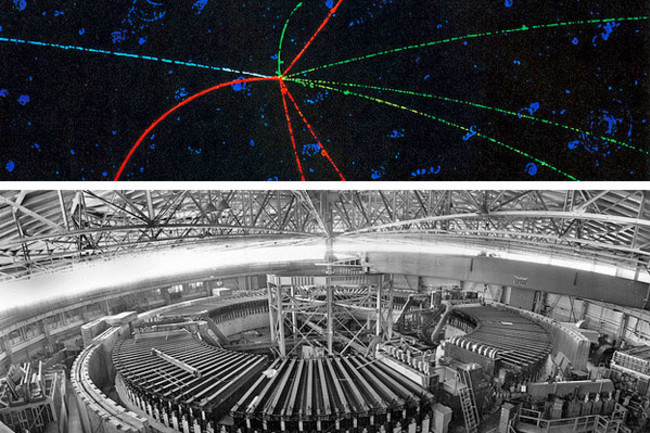 Anderson's positron discovery encouraged physicists to hunt for other antimatter particles. Though Anderson was lucky to trace positrons created from cosmic rays, physicists decided they'd have to look for the heavier anti-proton by making the desired particle themselves.

At the lab that later became the Lawrence Berkeley National Laboratory, physicists pummeled a stationary target with a beam of protons. The researchers expected that the resulting collision would create around 40,000 other particles along with the anti-proton, and they would all only exist for about 100 nanoseconds (about the time for light to travel 100 feet in a vacuum). After that, the antimatter particle would meet matter--meaning mutual destruction as the two annihilated each other, forming energy to make other particles.

Despite these challenges, in 1955 a team led by Emilio Gino Segre and Owen Chamberlain spotted the telltale path of the antiproton. Above, the top picture (from a later experiment) shows an example of the antiproton (the pale blue streak) annihilating a proton and creating positive and negative particles known as pions (respectively, the red and green lines). The bottom 1956 photograph shows the interior of the Bevatron, the particle accelerator used in the experiments. 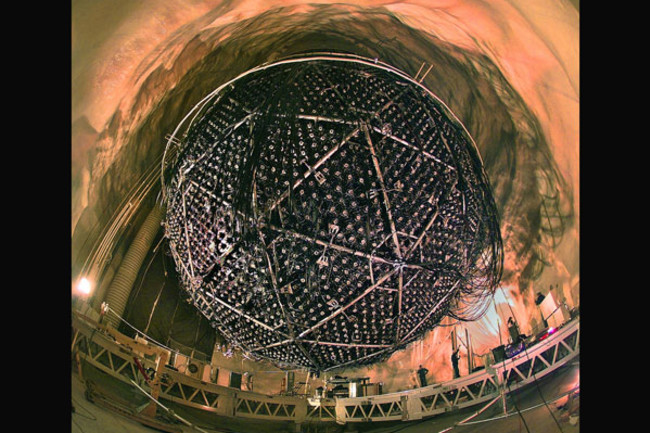 Missing energy is another clue when particle hunting. In a type of radiation called beta decay, certain atoms' nuclei give off an electron. In 1930, this confused physicists: The energy of the electron didn't seem to match the energy given off by the nucleus. As a "desperate solution," Wolfgang Pauli imagined that an unseen particle, what we now call a neutrino, carried away this missing energy. The only trouble was that detecting the neutrino seemed nearly impossible: It had no charge and appeared to have little or no mass.

In the Savannah River Plant experiment, Frederick Reines and Clyde Cowan hoped to spot the "poltergeist" particle in a detector using tanks of water mixed with cadmium chloride. Actually, they set out to prove a neutrino's existence by finding its antimatter counterpart, the antineutrino. In the 1950s they saw the aftermath of an antineutrino as it smacked into a proton--creating a positron and a neutron. Scintillators--detectors that give off light--glowed with the telltale signature of the antineutrino's collision, radiation emitted when the positron annihilated an electron and a cadmium nucleus captured the neutron. According (pdf) to Reines, when his team telegraphed Pauli in 1956 to tell him of their confirmation, he interrupted a CERN meeting to announce the results. "We learned later," Reines said, "that Pauli and some friends consumed a case of champagne in celebration."

Particle hunters still use large volumes of water as neutrino targets. The Sudbury Neutrino Observatory, pictured above, finished collecting data in 2006. Almost 60 feet in diameter, the sphere contained 1,000 tons of heavy water (water that includes hydrogen with an extra neutron in its nucleus) surrounded by 9,522 light detectors that looked for neutrinos a mile underground in Sudbury, Canada. 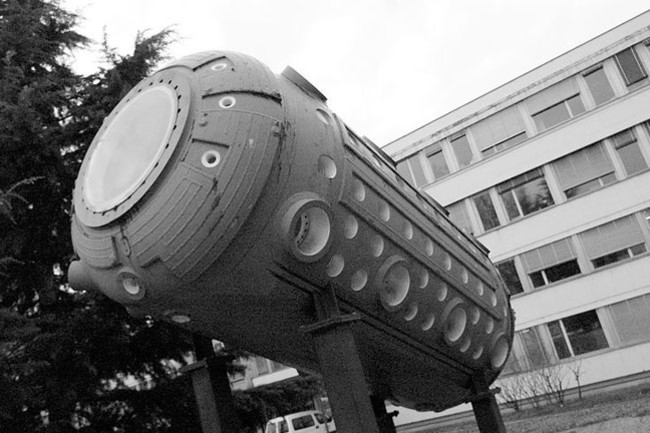 As with Wilson and his cloud chamber, sometimes creating a tool to find particles is as praiseworthy as hunting down the particles themselves. In 1960, Donald Glaser won the Nobel Prize for creating the bubble chamber--a detector that allowed physicists to record a particle's trail as it raced through liquid on the verge of boiling. The 1960 Nobel Prize speech bestowing Glaser's prize calls the bubble chamber the anti-Wilson chamber, noting that while a cloud chamber shows liquid tracks in a gas, a bubble chamber shows small gas bubbles in a liquid.

One famous bubble chamber is CERN's Gargamelle detector, pictured above. Over six feet in diameter and almost 13 feet long, the cylindrical detector once contained around 18 tons of freon and helped physicists on the road to finding particles called W and Z bosons, by confirming in 1973 what are known as "weak neutral currents." Bosons are what physicists call "force carrying" particles--the W and Z bosons (finally detected in 1983) carry the weak force, which is responsible for beta decay. 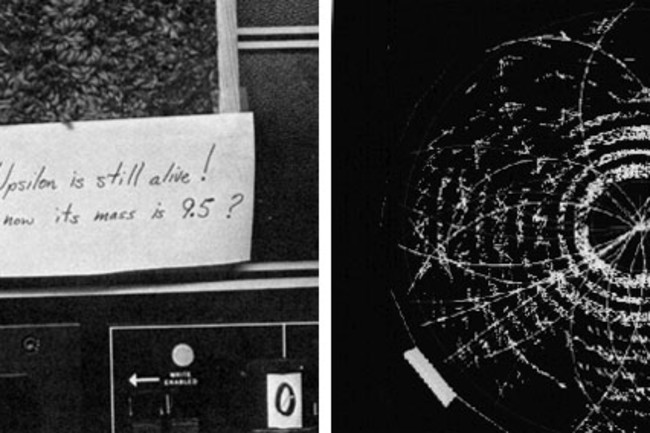 Though neutrinos and electrons don't contain any other particles, protons and neutrons are made from still smaller particles, called quarks. Even today's Large Hadron Collider has far too little energy to free a single quark for observation. Instead, particle hunters confirm quarks' existences by forcing them (in high energy collisions) to recombine into various particles that physicists can detect.

There are six quarks: up, down, charmed, strange, top, and bottom. Bottom and top quarks appeared last, in 1977 and 1995. The left picture above is from the Fermilab group that discovered the bottom quark, which researchers witnessed in the form of a particle called an Upsilon, the combination of a bottom and anti-bottom quark. This was the second time Fermilab researchers believed they had spotted the Upsilon; a lower mass particle spotted earlier was later jokingly renamed an Oops-Leon, a friendly jab at the Upsilon team's leader Leon Lederman. The right picture shows a computer readout from a Fermilab detector used to confirm the top quark's existence in 1995. 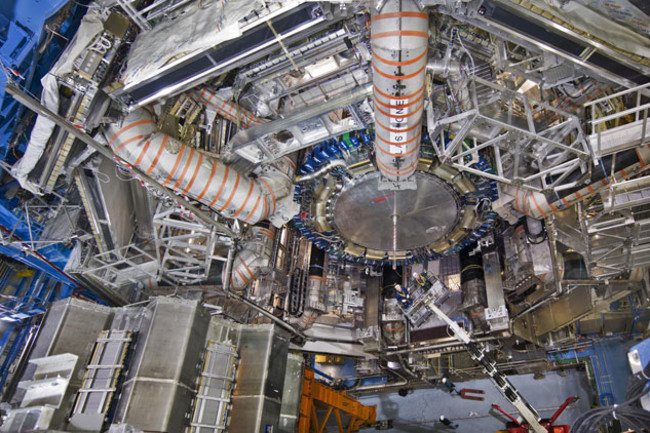 Today, the Large Hadron Collider uses giant detectors to sort through the particle smithereens created from around 600 million head-on collisions per second. The protons run 11,245 laps per second around the LHC's 16-mile ring, travelling some 99.99 percent of the speed of light. The data recorded by the largest detectors at the LHC could fill around 100,000 dual-layer DVDs each year.

To hunt for the Higgs boson, the two "general purpose" detectors at the LHC, known as ATLAS and CMS, use multiple layers of materials to sort through the particles created from collisions. Particle trackers analyze the paths of charged particles such as electrons and positrons in magnetic fields. Unlike cloud and bubble chambers, which made the particles' paths directly visible, computers now analyze the electric currents induced by the charged particles as they move through the trackers to determine the particles' paths. Calorimeters measure the energy given off when a particle slams into different materials such as lead and liquid argon. Particle identification detectors record radiation emitted from moving particles when they pass between different kinds of materials.

By layering these types of detectors, modern day particle hunters force their quarry through a gauntlet of identification tests. For the ATLAS detector, pictured above, that multi-layered setup is 150 feet long and 82 feet high. It weighs about the same as the Eiffel Tower--around 7,000 tons. 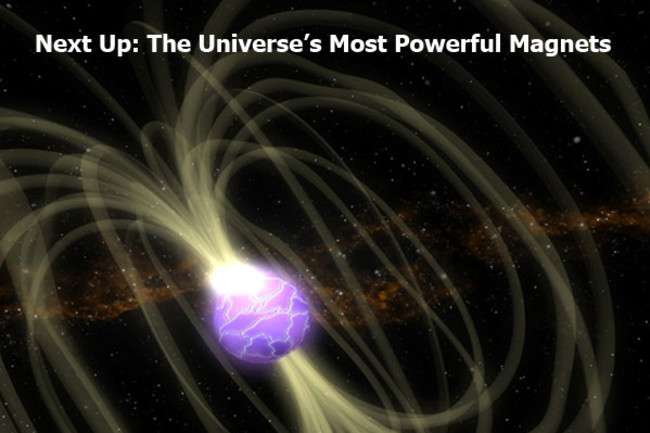