Discovered: One of the Oldest Stars in the Galaxy 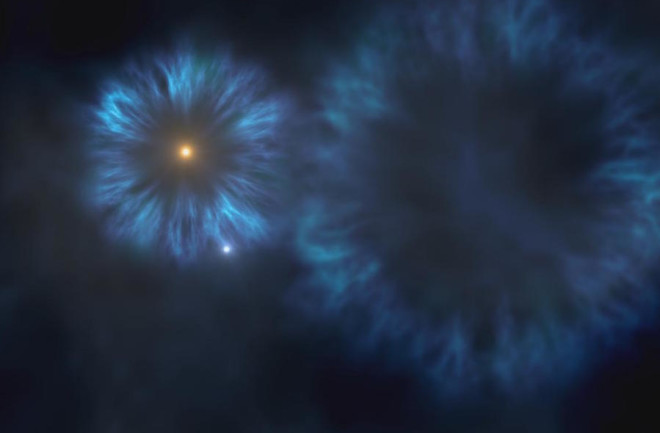 Astronomers recently discovered one of the first stars formed in the Milky Way, J0815+4729, shown here in this artist concept. This low-mass star is one of the most iron-poor and carbon-rich stars found to date, suggesting it formed shortly after the Big Bang. (Credit: Gabriel Pérez/SMM/IAC) In a new study published in The Astrophysical Journal Letters, a team of Spanish astronomers announced the discovery of one of the first stars to form in the Milky Way. The unevolved star, called J0815+4729, is located 7,500 light-years away in the halo of the Milky Way and likely formed just 300 million years after the Big Bang, some 13.5 billion years ago. “We know of only a few stars (which can be counted on the fingers of a hand) of this type in the halo [of the Milky Way], where the oldest and most metal-poor stars in our galaxy are found,” said David Aguado, a research student at the IAC and lead author of the study, in a news release. The ancient star, which is only 70 percent the mass of the Sun, was initially identified from a dataset generated by the Sloan Digital Sky Survey (SDSS) — a massive survey project that has gathered deep multi-color images for about one third of sky, as well as spectra for more than three million astronomical objects. The researchers specifically selected J0815+4729 for follow-up based on its apparent lack of metals — a term which astronomers apply to any elements larger than hydrogen and helium. After identifying J0815+4729 as metal-poor, the researchers analyzed its physical and chemical properties by breaking down the star’s light into its constituent parts — a technique called spectroscopy. The team collected the spectra using the ISIS spectrograph on the William Herschel Telescope and the OSIRIS spectrograph on the Gran Telescopio Canarias (GTC), both located in La Palma, Spain. Based on their spectroscopic follow-up, the team determined J0815+4729 has roughly a million times less calcium and iron than the Sun. This is important because only the earliest generations of stars have such low metallicities. Older stars, on the other hand, are formed out of the accumulated material from previous generations of stars, which produce lots of metals during their final death throes. Although J0815+4729 is extremely deficient in calcium and iron, the researchers’ were surprised to find that the star has a comparatively large abundance of carbon, nearly 15 percent more than the Sun. Though it may seem counter-intuitive, previous research suggests that low-mass, extremely metal-poor stars likely develop an overabundance of carbon by accreting it from the first generation of low-metallicity supernovae, which lived very short lives. Because J0815+4729 is so metal-poor while also being so carbon-rich, the researchers are confident the star formed long, long ago, when the Milky Way was just establishing itself some 13.5 billion years ago. “Theory predicts that these stars could form just after — and using material from — the first supernovae, whose progenitors were the first massive stars in the Galaxy, around 300 million years after the Big Bang," said Jonay González Hernández, a researcher at IAC and co-author of the study. Though the researchers’ have already shown that J0815+4729 is likely one of — if not the — most iron-poor unevolved stars known, they still plan to collect higher-resolution spectra of the star to help derive other important elemental abundances. By doing so, the researchers aim to provide “new fundamental constraints on the early stages of the universe, the formation of the first stars, and the properties of the first supernovae.”