Disappointing News: No Icy Patches in the Lunar Craters 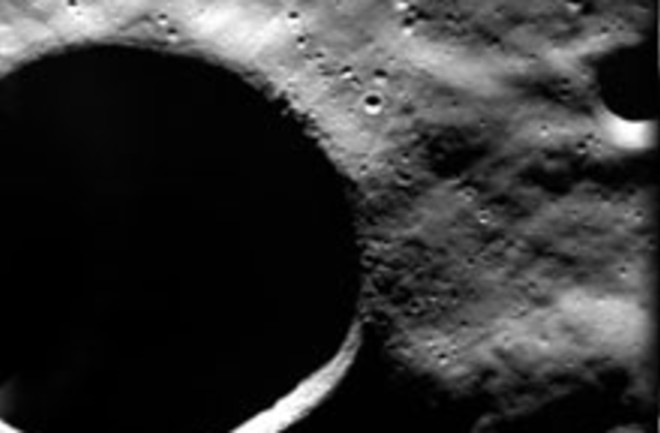 Researchers have gotten a close look at a lunar crater that was thought to hold “skating rinks” of ice, and have reached the disappointing conclusion that the crater does not have visible patches of water ice after all. New images from the Japanese lunar orbiter, Kaguya, reveal no traces of ice in the Shackleton crater, a cold and shadowy place near the moon‘s south pole. Ice would be vital for future colonies on the Moon, providing drinking water for astronauts and hydrogen fuel for their vehicles [New Scientist].

Researchers had high hopes for the Shackleton crater because it never receives direct sunlight. The theory was that if comets have landed there (and, given the craters’ ages, the odds are that several will have), some of the ice carried by such dirty celestial snowballs might be preserved in the permanent shadow cast by the craters’ walls [The Economist]. Then NASA’s 1998 Lunar Prospector detected an excess of hydrogen at the moon’s poles, which researchers thought indicated the presence of water ice.

The Kaguya’s findings, published in Science [subscription required], don’t squelch all hopes for water ice on the moon, but they do demonstrate that there aren’t any easily accessible patches. The craft’s Terrain Camera, which can discern features as small as 10 meters, was able to image Shackleton’s floor because sunlight scattered from the crater’s inner wall, near the rim, illuminates the floor. Ice would show up as bright, highly reflective patches, and the images show no such features [Science News].

There’s still a possibility that ice could be buried beneath the surface (as it is at the Martian pole), or that tiny ice crystals are mixed in with soil. The Indian lunar orbiter Chandrayaan 1 that launched earlier this week will study the problem with a spectroscope, analyzing the elements present on the moon. NASA’s Lunar Reconnaissance Orbiter, due to launch next year, is expected to send several probes crashing into the polar region in order to scan the resulting plumes of debris for water vapour. If it was there, that would be pretty conclusive [The Economist].

More From Discover
The Sciences
The Search for Ice Deposits in Moon Craters
The Sciences
Don't Miss The Century's Longest Partial Lunar Eclipse This Week
Mind
The Moon and Your Mood
Technology
New Evidence Suggests Apollo 11's Lunar Ascent Module Could Still Be Orbiting the Moon
The Sciences
A Telescope on the Moon Could Illuminate the Dark Ages of the Universe
Planet Earth
The Nebra Sky Disk: Is the World’s Oldest Star Map Really a Map At All?
Recommendations From Our Store
My Science ShopDiscover STEM Kits
My Science ShopDiscover 2022 Calendar
My Science ShopStrange Science
My Science ShopElements Flashcards
Shop Now
Stay Curious
Join
Our List