Dione May Be Saturn's Third Moon Hiding an Ocean 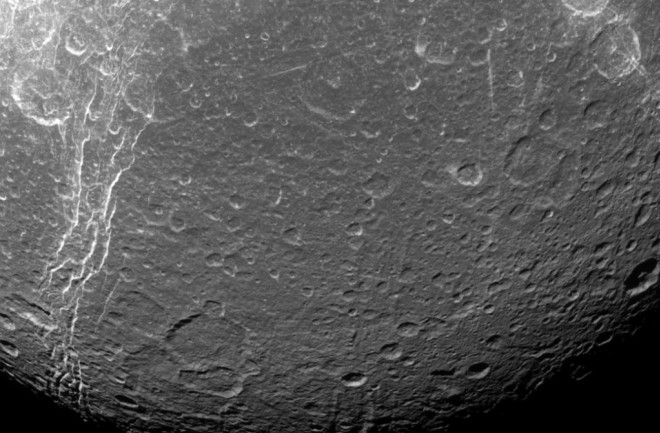 Dione reveals its past via contrasts in this view from NASA's Cassini spacecraft. (Credit: NASA/JPL-Caltech/Space Science Institute) Saturn's moon Dione has joined the growing list of watery bodies in our solar system. Data from NASA's Cassini probe indicate that a liquid ocean some 20 miles deep exists far below the icy surface of the moon. This means that its interior looks similar to two other Saturnian moons, Titan and Enceladus, both of which hide vast oceans beneath a thin crust of ice. Dione is likely different in at least one respect though: the data indicate it's ocean buried much deeper.

The researchers based their analysis on gravity measurements taken by the Cassini spacecraft as it flew by Dione, tracking subtle shifts in the trajectory of the craft due to Dione's gravitational pull. Similar methods have been used before, but the data always seem to indicate that Dione had no such subterranean ocean. The new data, combined with a revised model of how the moon's crust should behave, changes that assumption. The researchers also propose a new understanding of Enceladus. The moon's ocean and geysers have garnered a lot of attention, but it's been assumed that Enceladus' water would be trapped deep below the surface. Based on the new model and Enceladus' libration — relatively large back-and-forth swings during its orbit — the data indicate the moon's ocean is only a few miles beneath the surface. This would also help explain the presence of those geysers.

Another Possibility for Life

The discovery of liquid water on yet another moon in the solar system potentially gives researchers another option in the search for life. The ocean has probably existed for most of Dione's existence, giving any potential organisms plenty of time to establish themselves. The researchers are most interested in the region where the water meets the moon's rocky core, where chemical interactions between the two could provide some of the molecules critical for life to begin. Dione now joins Titan, Enceladus, Europa, Ganymede and Pluto as the solar system's wettest places — beyond Earth. And, given that we seem to find new bodies of liquid water every time we take a closer look at our solar system, more are likely to come.