Some astronomers hypothesize that asteroids and comets might shuttle biological matter between planets. 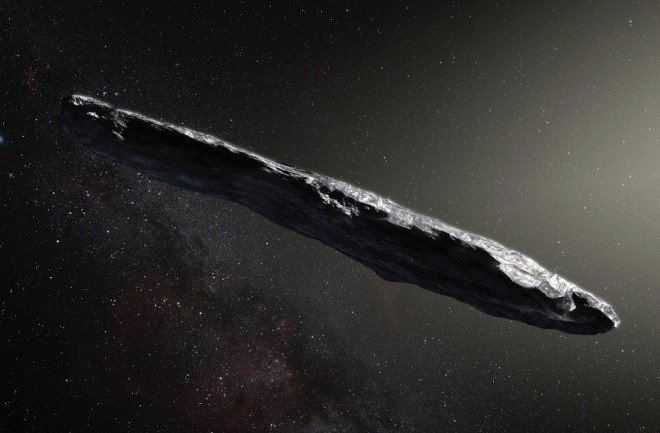 The mysterious object ‘Oumuamua passed through our solar system in 2017. Loeb has suggested it could have been sent by extraterrestrials. (Credit: European Southern Observatory/Kornmesser)

This article appeared in the June 2021 issue of Discover magazine as "Did Life Come From Space?" For more stories like this, become a subscriber.

Life, for all its complexities, has a simple commonality: It spreads. Plants, animals and bacteria have colonized almost every nook and cranny of our world.

But why stop there? Some scientists speculate that biological matter may have proliferated across the cosmos itself, transported from planet to planet on wayward lumps of rock and ice. This idea is known as panspermia, and it carries a profound implication: Life on Earth may not have originated on our planet.

In theory, panspermia is fairly simple. Astronomers know that impacts from comets or asteroids on planets will sometimes eject debris with enough force to catapult rocks into space. Some of those space rocks will, in turn, crash into other worlds. A few rare meteorites on Earth are known to have come from Mars, likely in this fashion.

“You can imagine small astronauts sitting inside this rock, surviving the journey,” says Avi Loeb, an astrophysicist at Harvard University and director of the school’s Institute for Theory and Computation. “Microbes could potentially move from one planet to another, from Mars to Earth, from Earth to Venus.” (You may recognize Loeb’s name from his recent book Extraterrestrial: The First Sign of Intelligent Life Beyond Earth, which garnered headlines and criticism from astronomers for its claim that our solar system was recently visited by extraterrestrials.)

Loeb has authored a number of papers probing the mechanics of panspermia, looking at, among other things, how the size and speed of space objects might affect their likelihood of transferring life. While Loeb still thinks it’s more likely that life originated on Earth, he says his work has failed to rule out the possibility that it came from somewhere else in space.

Meanwhile, recent experiments have suggested that earthly organisms can survive in space, at least for a little while. Experiments aboard the EXPOSE-E facility at the International Space Station have subjected bacteria, lichens and plant seeds to the extreme cold and radiation of space for anywhere from a few days to over a year. Some bacteria and other organisms were able to survive the journey, including tardigrades, ultra-hardy animals found everywhere from Arctic ice to the deep ocean.

If an asteroid or comet is large enough, microbes could be frozen deep within, Loeb says. That could protect them from radiation and the extreme temperatures that turn meteors into fireballs. After they explode onto the surface of a new world, these extraterrestrial colonists could begin to thrive.

In other solar systems, panspermia could be even more likely to occur than in our own. For example, the seven tightly packed planets of the TRAPPIST-1 system, discovered in 2016, might be ideal for life to planet-hop. If we find life there one day, Loeb says, we should pay attention to whether it all looks suspiciously similar. He thinks two neighboring planets with similar biological systems would be a sure sign that life had traveled between them at some point.

Loeb also hypothesizes that panspermia could occur even between distant star systems. Interstellar visitors, like the recently observed space object ‘Oumuamua and the comet Borisov, could spread life from system to system.

Such a process could even begin on our own planet. In a paper published in the journal Life, Loeb looked at the possibility that asteroids or comets might graze the Earth’s atmosphere, dozens of miles above the surface, picking up microorganisms floating high in the sky, before heading out on interstellar journeys. He estimates that, though rare, a few such instances have likely occurred during Earth’s lifetime.

Even if an asteroid flyby did pick up a few microbes from Earth, it’s highly unlikely that they would survive the journey, much less land on another planet with conditions similar to ours. But, then again, we can’t necessarily rule it out.