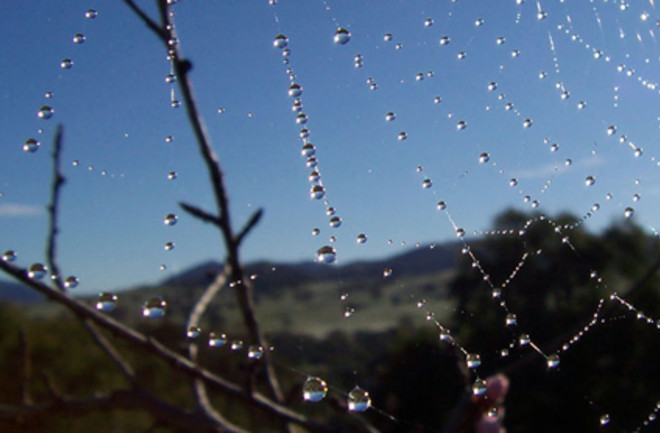 You've probably heard about the extraordinary strength of many kinds of spider silk, but researchers in China say they've figured out another fascinating property of the silk—how it catches water in the air—and created their own copycat material. For a study in Nature, Chinese scientists looked at the small, non-poisonous cribellate spider's silk.

The secret, revealed by scanning electron microscope, lies in the silk's tail-shaped protein fibres which change structure in response to water. Once in contact with humidity, tiny sections of the thread scrunge up into knots, whose randomly arranged nano-fibres provide a roughly, knobbly texture [AFP]

. In between these knots are smooth areas where the fibers are neatly aligned, allowing water to slide along until it hits a knot, where dewdrops accumulate.

Armed with this knowledge, Jiang's team then replicated the spider fibres using polymethyl methacrylate, a synthetic polymer that was chosen because it bonds well with water molecules [Physics World]

. The researchers report that their creation succeeded in gathering water the same way that spider silk does. Still, they don't know for sure why spiders developed this elaborate water-catching system. Jiang says that the purpose could be to gather drinking water so they don't have to go looking for it, or to "refresh" the web to make it stronger and more robust. There's also the possibility that the weight of too much water could destroy a web, but the spider's water system allows droplets to coalesce and then fall off, relieving the web of that weight. Whatever the reason, Jiang's team says materials designed to mimic this capacity of spider silk could have benefits like speeding up chemical or industrial processes, or in a simpler sense, helping people in dry areas catch more water.

Fog collection entails stretching out nets or canvas on poles and using the mesh to catch moisture from the breeze. The runoff is collected in a pipe or a trough on the ground. The technique, pioneered in the coastal Andes, is being encouraged in poor, dry parts of the world, such as Nepal [AFP]