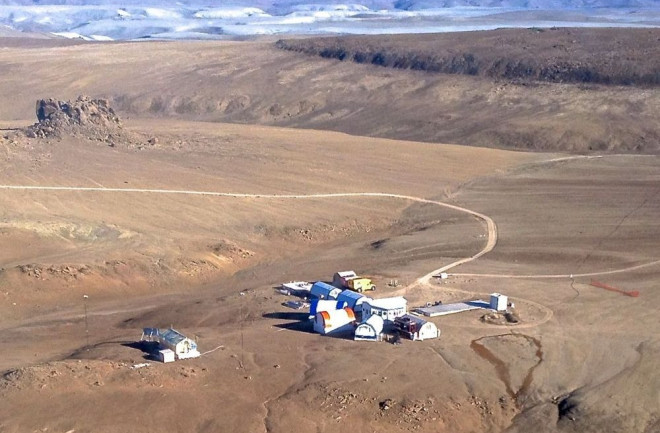 He outlined an ambitious plan to begin sending cargo missions to Mars by 2018, with the first manned missions leaving by 2022 or 2023. Along the way, he hopes to improve the cost of trips by “5 million percent”, and establish a colony of 1 million souls there within 40 to 100 years. Let’s just say people had questions — The Verge’sLoren Grush outlined a few of them.

How will humans survive? What about radiation? How will they get around? What happens to the waste colonists flush down the toilet? We didn’t get a clear answer form Musk, but these are the kinds of questions that NASA scientists have been working to answer for two decades in one of the most remote, empty places on earth: Devon Island.

Devon Island is the largest uninhabited island on the planet, and it’s about as Mars-like as it gets. It’s home to the 14 mile-wide Haughton Crater, which is cold, dry, rocky and extremely isolated. Since 1997, Pascal Lee, planetary scientist at the Mars Institute and the SETI Institute, and director of the Haughton-Mars Project at NASA Ames Research Center, has led missions every summer from a small research station there to prepare people and design technologies for a trip to the Red Planet.

On the island, researchers have tested robots, spacesuits, drills and other tools that would aid future Mars explorers. It’s also a proving ground for would-be Mars colonists. Devon Island is isolated, the environment is brutal and the area is poorly mapped, which makes it the perfect place to get a taste of what might go wrong out there.

From 2009 to 2011, six scientists, led by Lee, took a Martian-like road trip aboard a modified Humvee, called the HMP Okarian, which served as a simulated moon or Mars pressurized rover. The goal was to cross the Northwest Passage in a road vehicle and reach the Haughton research station — easier said than done.

If you want a glimpse of the struggles Musk’s future space colonists might confront, be sure to check out “Passage to Mars,” a new documentary hitting theaters Friday that follows the HMP Okarian crew on their journey across the Arctic. Zachary Quinto narrates the film, drawing from Lee’s actual expedition logs from the trip. Apollo 11’s Buzz Aldrin also guest stars in the film. It’s a humbling examination of what’s in store for future explorers.

“Astronauts bound for Mars will train on Devon Island, and we hope this film will inspire and ready all explorers,” says Lee.