Destroying an Incoming Asteroid is Even Harder Than Scientists Thought 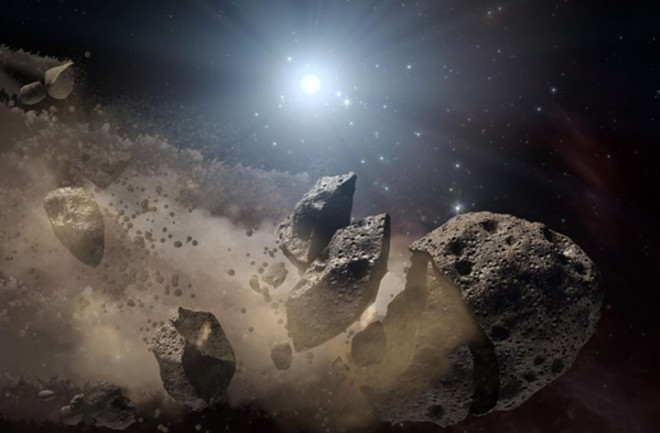 Smacking an asteroid with a bomb or a smaller asteroid should shatter it into manageable pieces, right? Wrong, a new study shows — this picture isn't likely after a minor collision. (Credit: NASA/JPL-Caltech)

You’ve likely heard by now that the movie Armageddon got it all wrong — it’s just not feasible to blow up an asteroid heading toward Earth with a bomb or few. But how unrealistic is it, really? New research set for publication March 15 in the planetary science journal Icarus is sending any hope humanity might have had to nuke an incoming asteroid threat even further into the realm of impossibility. Breaking up asteroids, it turns out, is really, really hard to do.

The new study was led by Charles El Mir, a researcher in Johns Hopkins University’s technical engineering department. He made use of both recent advancements in our understanding how rocks fracture, as well as improved computer code to model what happens when you smack an asteroid with something big.

“Our question was, how much energy does it take to actually destroy an asteroid and break it into pieces?” El Mir said in a press release.

The answer to that question, it turns out, is “that asteroids are stronger than we used to think and require more energy to be completely shattered,” he said.

The simulations run by El Mir and his team let them study the aftermath of an asteroid collision via a “hybrid” approach that focuses on two different stages of a hit using two different types of computer code. They modeled an asteroid 15 miles (25 kilometers) across that’s smacked with a head-on impact from a 0.75-mile-diameter (1.21 km) impactor made of basalt and traveling at 3 miles (5 km) per second.

During the fictitious collision, a material model first showed the short-term fragmentation that took place within the asteroid just after it is struck, a process that occurs within just a fraction of a second. Then, their code handed the calculations over to a different type of model called an N-body model, which showed what happened over the longer term — hours after impact — as the asteroid’s gravity influenced any small pieces that might have flown off during the collision.

Would an asteroid shatter on impact? And what would happen to those pieces over time? Would they fly apart, or would they come back together to re-form the asteroid, nullifying the effects of the impact?

In answer, the team found that no — the asteroid didn’t shatter on impact. Instead, the initial impact causes millions of internal cracks to develop, and the areas nearest the hit actually flowed like sand, allowing a crater to form. But those cracks didn’t destroy the asteroid; instead, they left behind a damaged but intact body that was large enough to pull any smaller pieces that may have flown off back onto itself, essentially completely reassembling the parent body.

The results differ significantly from previous studies in the early 2000s, whose code simulated a collision between an identical pair. In that study, the larger body was completely destroyed. But the older code, the researchers say, was not able to take into account the smaller-scale processes occurring on the asteroid during the initial collision. Because cracks propagate through an asteroid with limited speed, the authors say, they aren’t able to shatter an asteroid as easily as previously thought.

That’s not the large-scale destruction moviegoers are going for, but it does tell researchers a lot about how collisions between asteroids might have shaped their evolution into the objects they are today. The work also has applications, the researchers say, for future missions to mine material from asteroids. That’s because material thrown off during the collision ended up scattered back over the asteroid’s surface — potentially exposing internal riches for easier access.

But it’s still hard to forget the picture of an asteroid hurtling toward our planet. While this new study indicates a Hollywood-style explosion wouldn’t save Earth from an incoming impactor, it stll holds keys to answering the question of what we would do if Armageddon’s storyline became a reality. (And just in case you’re starting to feel nervous, NASA’s already on this — the Planetary Defense Coordination Office is tasked with monitoring and learning more about any large objects with orbits that bring them within 0.05 AU [about 4.6 million miles, or 7 million km].)

“If there’s an asteroid coming at Earth, are we better off breaking it into small pieces, or nudging it to go a different direction? And if the latter, how much force should we hit it with to move it away without causing it to break? These are actual questions under consideration,” said El Mir.

“It is only a matter of time before these questions go from being academic to defining our response to a major threat,” added study co-author K.T. Ramesh of the Hopkins Extreme Materials Institute. “We need to have a good idea of what we should do when that time comes – and scientific efforts like this one are critical to help us make those decisions.”