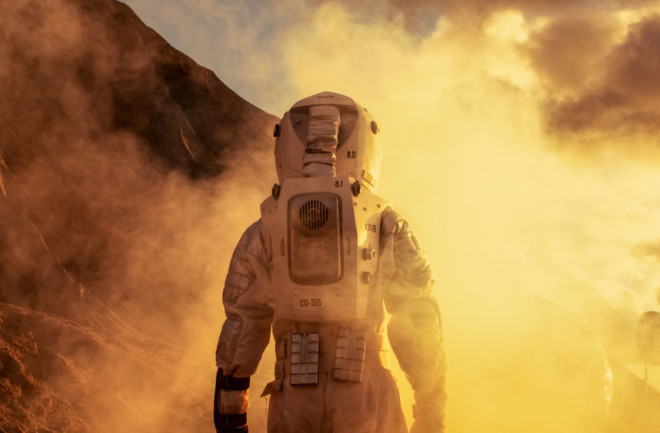 Radiation could harm the intestinal tracts of future astronauts traveling to deep space. (Credit: By Gorodenkoff/shutterstock)

Traveling to and exploring space is an obviously dangerous venture. Astronauts launch with the full knowledge that they may not return, and future missions that stretch farther out into the solar system will be even riskier. Deep-space travel could even cause significant gastrointestinal (GI) damage to astronauts, according to one new study.

Researchers at Georgetown University Medical Center (GUMC) have exposed mice to radiation to simulate how galactic cosmic radiation (GCR) in deep-space will affect future astronauts. Their results suggest that the radiation could cause serious GI damage. Their study even raises concerns about how this radiation could possibly cause stomach and colon tumor growth. “Space radiation is different from radiation on Earth,” says Kamal Datta, an associate professor in the Department of Biochemistry and a project leader of the NASA Specialized Center of Research (NSCOR) at GUMC. Currently, “what we don’t know is how space radiation affects the gastrointestinal tract,” Datta adds. And overall, he says our understanding of how cosmic radiation affects  astronaut health is “unknown territory.”

Every three to five days, the top layer of cells in our GI tract is replaced with brand new cells. This process is part of healthy GI function. When this replacement process is disturbed, it can change how we absorb nutrients and even lead to cancer, according to Albert Fornace Jr., co-author of the study and director of the NASA Specialized Center of Research (NSCOR) at GUMC.

To simulate the deep-space radiation astronauts might experience, researchers exposed mice to short bursts of a low dose of ionizing radiation at the Nasa Space Radiation Laboratory (NSRL). Researchers compared these mice to mice exposed to gamma rays, which are comparable to X-rays, according to a statement. Alongside a third, control group, researchers monitored the mice following exposure and found that mice in the radiation group, or the mice exposed to radiation comparable to what astronauts might experience, formed cancerous growths and weren’t able to absorb nutrients properly.

Additionally, the research team found that the mice exposed to radiation produced more senescent cells, which are a type of cell incapable of regular cell division. These cells can slow down the replacement of GI cells, therefore slowing down GI function, cause oxidative stress and even cause serious GI damage.

This harm caused by the radiation appeared to be permanent, according to the statement.

The team says they plan to continue studying these effects in mice and will use longer bursts of radiation to simulate longer exposure. And while “mouse data” might not be a perfect analog for studying impacts to human health, there aren’t enough astronauts to collect data from to form a conclusion with and there would likely be ethical issues if researchers tried to use human astronauts as test subjects in a similar experiment. Nevertheless, Datta hopes to develop a risk estimation model for humans that would let space agencies calculate the risks to astronauts on future missions.

Once they understand the risk better, Datta said, “the goal is to develop protection measures whether we can test some drug or medicine that can prevent all the changes we observe.”

This work was published Oct. 1, 2018, in the Proceedings of the National Academy of Sciences (PNAS).

Editor’s Note: This story has been updated to clarify language. An earlier version of this story referred to “iron radiation.” The particles being studied are charged iron nuclei that reach our solar system from deep space.