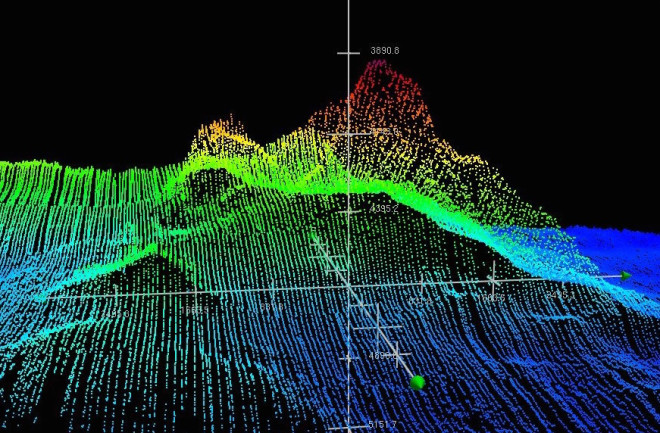 A 3D bathymetric rendering of Tamu Massif. (Image: SOI, John Greene) After decades of work and a series of state-of-the-art oceanographic expeditions, one of the world’s most confounding geologic mysteries is slowly coming into focus. The object of interest is the Tamu Massif in the western Pacific Ocean, a New Mexico-sized bump in the oceanic crust that constitutes the world’s largest volcano. This superlative was only bestowed in 2013, when the enormous feature was declared a single structure; the recency of the finding highlights the inherent difficulty of even the most sweeping reconnaissance, when done underwater. Now, William Sager and his research team from the University of Houston and Texas A&M University are back on the scene, piecing together a complex data set and get to the bottom of Tamu’s bizarre morphology and mixed geological signals. The Massif is a shield volcano (think Mauna Kea and Mauna Loa in Hawaii – but much bigger), a type of feature that spews lava in all directions and builds up a symmetrical cone. But the mountain was erupted at a mid-ocean ridge (MOR), an approximately linear crack in the oceanic crust where molten rock is sucked out of the mantle and new ocean crust is formed. So is Tamu a shield volcano that happens to be located at a MOR, or a bizarre spreading center with a uniquely effusive morphology? Sager and his team started by looking at the paleomagnetic record of the mountain’s flanks. When magma cools on the seafloor, the magnetic minerals in the incipient rock record the direction of the Earth’s magnetic field. Because the planet’s field flips orientation every couple hundred thousand years, it’s possible to read alternating magnetic orientations like a tape recorder, temporal contours that offer insight into the timing of eruptions.

To gather the necessary evidence, the Schmidt Ocean Institute’s R/V Falkor criss-crossed the enormous Massif, with scientists working around the clock to collect magnetic field and multibeam bathymetry data in a process Sager calls “mowing the lawn.” Initial results from one side of Tamu have shown parallel magnetic stripes, a calling card of MOR-style formation. But that seems to be at odds with the picture of a shield volcano, whose eruptive events would have sent sheets of lava down the mountain’s slopes and out onto the seafloor. “Mid-ocean ridges are large linear volcanoes,” Sager explains, “and those lava flows don’t go long distances or you would not see coherent magnetic stripes.” So, with the first round of magnetic data suggesting a MOR-style bidirectional spreading and regional morphology pointing toward a radial shield volcano, Sager sees the schizophrenic volcano as “a sort of Jekyll and Hyde situation”. With the most recent expedition’s magnetic maps, answers may be forthcoming. One important piece of the equation may have been overlooked in the reductive MOR vs. shield debate: the presence of a tectonic triple junction, where three plates meet. Here, even “traditional” MOR eruptions could take on an unusual morphology, and regional-scale crustal thinning could allow for a more substantial lava reservoir. “One way to have both the characteristics of a MOR and a big upwelling blob of magma,” posits Sager, "is to have the blob entrained in the upper mantle circulation beneath the MOR and emerge through the triple junction," perhaps experiencing punctuated spurts of activity that overprints the canonical conveyor belt model. But even as he and his colleagues get ever closer to solving this outstanding mystery of marine geology, Sager is resigned to taking the long view. “That’s the challenge we face,” he says, “we’re dealing with an area so large that one cruise is unlikely give us all the answers."

Help us do science! I’ve teamed up with researcher Paige Brown Jarreau to create a survey of Extremo Files readers. By participating, you’ll be providing me valuable feedback AND contributing to real live science on blog readership. You will also get FREE science art from Paige’s Photography for participating, as well as a chance to win a $50 Amazon gift card (100 available) and other perks. It should only take 10-15 minutes to complete. You can find the survey here: http://bit.ly/mysciblogreaders