According to researchers, there's little evidence that the cognitive ability of Neanderthals was any different from that of our ancestors. 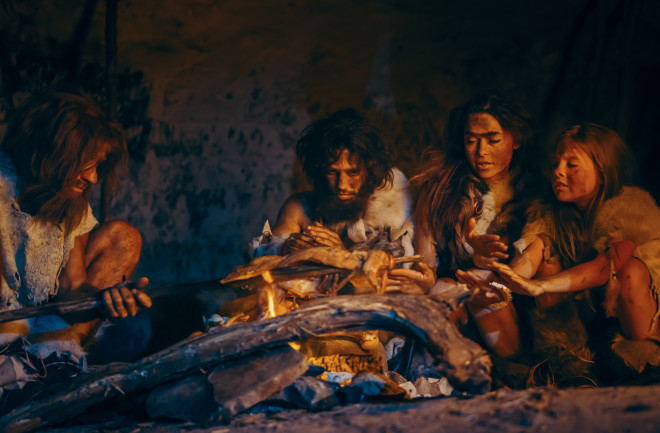 Calling someone a Neanderthal is supposed to be insulting — insinuating ignorance, simple-mindedness or a brutish sensibility. We’ve long thought that humans must have survived because we were intelligent enough to outsmart our own extinction; meanwhile the Neanderthals' demise must have been due, at least in part, to their intellectual inferiority. Although this might make us feel like we’re at the top of the food chain, a number of researchers say it doesn’t line up with the data. In fact, the story of our survival is much more complicated.

Roger Seymour is a cardiovascular physiologist at the University of Adelaide in Australia who researches blood flow to the brain as an indication of species intelligence. While brain size used to be the main indicator of intelligence, his team identified blood flow to the organ as being just as crucial to our evolution. The evolving brain’s growing demand for power required increased blood flow to support it. In over 300 million years of evolution, in fact, our brains got around 350 percent larger while blood flow increased by a whopping 600 percent. And when Seymour looked at blood flow and brain size, he found little difference between the sub-species.

“The brains were similar in size and similar in blood supply from the internal carotid arteries to the cerebrum, the cognitive part of the brain … so effectively there is no evidence that the cognitive ability of the two species was any different,” Seymour says.

And it’s not just basic anatomy that disputes our claim of superior intelligence, says anthropologist Oren Kolodny. Human achievements were so similar to that of Neanderthals that it seems unlikely we were somehow smarter than our counterparts. All of the characteristics that have been used to demonstrate human superiority — for example, symbolic art, tool and weapon making, the use of fire, and burial ceremonies — have also been exhibited in Neanderthals.

Read More: What the Oldest Known Cave Painting Reveals About Early Humans (and What It Doesn't)

“If one species were brighter than the other you would expect it to be reflected in the material cultures of the two and this isn’t the case,” Kolodny says.

Not only were both species capable of so-called “human behaviors,” they may have done them together. Kolodny, a senior lecturer in evolutionary dynamics at The Hebrew University of Jerusalem, says the research seems to show that while Homo sapiens generally inhabited Africa before spreading throughout the world and Neanderthals generally inhabited Eurasia, the two groups liked cohabitated in the Levant (the modern-day Middle East) for around 70,000 years. “They could have interacted during this period and it’s likely they did because we see genetic material flowing between the two groups,” he says.

With the exception of humans who never left Africa, most H. sapiens have between 1 and 3 percent Neanderthal DNA in their genome — sometimes more. And strong arguments suggest that perhaps the tiny amount of Neanderthal that is now found in our genes wasn’t always so tiny. Natural selection, says Kolodny, could have been acting over a long period of time to clear our genomes of many of the Neanderthal sequences that carried deleterious mutations, especially when intermixed with human DNA.

These extremely subtle mutations could have resulted from small populations of Neanderthals interbreeding during certain “population bottle necks,” caused by lack of movement during an ice age, for example. Or it could be that the mutations occurred simply by the two populations coming together and forming a less evolutionarily fit hybrid.

“The small amount of Neanderthal genomes retained today likely remain because they provided a benefit. For example, genes related to the immune system tend to be Neanderthal,” Kolodny says.

Concluding that humans were smarter insinuates their gene pools were pure, but according to Kolodny, the subspecies not only interbred — they likely did it often. When H. sapiens left Africa and eventually interbred with Neanderthals, it would make sense that natural selection favored these immune system genes. Neanderthals were likely living in parts of the world where their immune systems were exposed to a completely different array of diseases. Adding these genes would have been beneficial to human survival elsewhere.

The Demise of Neanderthal

If we can’t pat ourselves on the back for being smarter than Neanderthals, then why are we the species that survived? This, the most widely asked question among anthropologists, is not simple to answer. But Kolodny says the research points to a few potential ideas. First, it’s important to consider that Neanderthals might never even have gone extinct, instead genetically embedding themselves in the human genome as a result of interbreeding.

If this wasn’t the case, he says, Neanderthals might have disappeared purely as a result of a numbers game. When the species came together, having more H. sapiens than Neanderthals would have made it easier for our ancestors to survive, say, a climatic event like an insidious drought or brutal ice age. The smaller Neanderthal population might have succumbed to the final blow 40,000 years ago. While research shows there were more H. sapiens overall than Neanderthals, we don’t have the data to show whether this was true in the places where they cohabitated, says Kolodny.

While we don’t know for sure what caused the demise of Neanderthals, it’s unlikely that a lack of intelligence was to blame. These were two very similar populations doing very similar things, while also interbreeding. The most likely scenario is that we appear more human today as a result of luck and good timing — not brain size.

How Humans Survived the Ice Age