A few weeks ago I was walking home with Mrs. Bad Astronomer and the Little Astronomer after taking the Bad Dog to the park, and we had all remarked on how lovely the rising Moon was. The Sun was just at the horizon, the Moon was on the opposite side of the sky, nearly full, and the air around the Moon was reddish and pretty. As the sky darkened, I noticed a pattern of light and shadow pushing its way through the sky. It was low contrast, and it took me a moment to figure out what I was seeing, but then it snapped into place: crepuscular rays! These are the beams of light you can sometimes see fanning out from the setting Sun. The sunlight is broken up by mountains or clouds on the horizon in front of the Sun, and if the air is hazy enough you can see the beams superposed on the sky. It's common enough to see the rays coming from the sunset, but the sky has to be just right for the rays to reach all the way across the sky. It has to be hazy, but not too hazy or else the light gets absorbed, and the rays fade out. This night things were just so, and I could see the rays coming together opposite the Sun in the sky. I was able to get a picture: 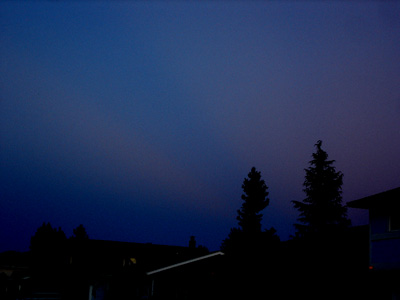 I had to stretch the contrast to bring the rays out, and even then they're subtle; the eye is much better at seeing contrast than a camera is. That image was taken with me facing roughly southeast. When I turned a little to my right and faced more south, here's what I saw: 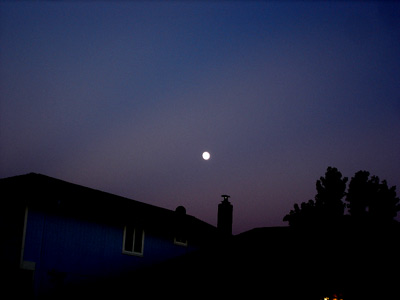 That was a visual treat. The rays were obvious, but not splashy, and the Moon rising in and among them was very pretty. Notice anything odd about those two pictures? The rays appear to be coming from two different directions! In the first picture, they are oriented upper-left to lower-right. In the second, they are upper-right to lower-left. That's because the area of the sky in the first picture is east of the anti-solar point (the point on the horizon directly opposite the Sun), and the area in the second picture is west of it. The rays are converging on the anti-solar point, so they look like they come from different directions on either side of that point. I know that sounds confusing, but in fact you've seen this before! This is all an illusion due to perspective. It's like looking at railroad tracks while you're standing on them. They appear to converge in the distance due to perspective: 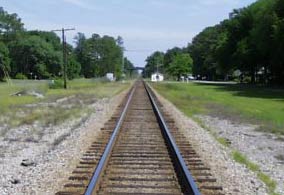 The rail on the left points to the upper right, and the rail on the right points to the upper left. See? Same thing with crepuscular rays, but on a somewhat larger scale. I bet not too many people have seen crepuscular rays converging on the anti-solar apex (say that five times fast!), let alone the Moon rising entwined in them. But they are one of the many, many rewards you get in life if you keep your eyes open, and your head up.