Could Volcanoes in India have Actually Killed the Dinosaurs? 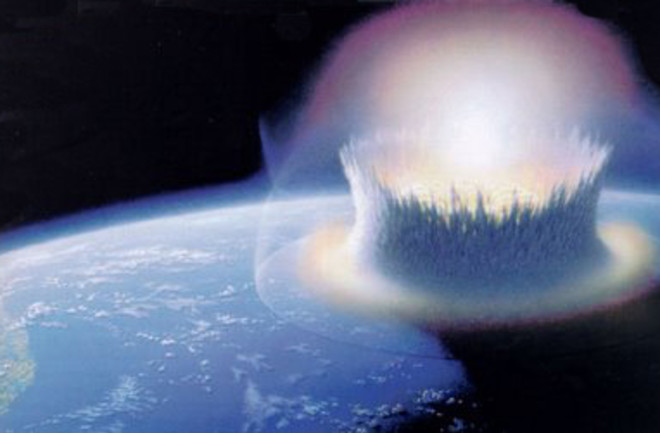 An artist's perspective of the impact that may have offed the dinosaurs. (Image: NASA) The demise of the dinosaurs is the stuff of middle school science classes: everybody knows that a massive meteorite crashed into the Yucatan Peninsula, setting off a series of calamities. Tsunamis rocked back and forth across the oceans, a scalding cloud of dust and ash shot outward from the impact site, and secondary impacts from the initial ejecta ignited forest fires far from ground zero. None of this was good news for the charismatic megafauna roaming the planet 66 million years ago, but it might not have been the only existential threat on the horizon. Halfway around the world, prodigious volcanic eruptions were forming the Deccan Traps in modern-day western India. Over tens of thousands of years, trillions of cubic meters of lava burst onto the Earth’s surface, ultimately covering 1.5 million square kilometers (an area nearly half the size of India) with thick layers of basalt. More dangerous than the molten rock itself was the cocktail of noxious gases that would have accompanied the explosions. Sulfurous fumes were lofted high into the atmosphere, leading to rapid global climate change. While the scientific consensus still places most of the blame for the Cretaceous-Paleogene mass extinction on the meteorite, the extensive volcanism likely played a critical role. And now, it seems like the two deadly forces might actually be linked. Paul Renne, the Director of the Berkeley Geochronology Center, led a recently published study that used high-resolution argon isotope dating techniques to zoom in on the precise timing of the Indian volcanism. In an earlier study, Renne and colleagues showed that global climate was already changing drastically by the time the Chicxulub crater formed, and that the Deccan eruptions began hundreds of thousands of years earlier. But they may have gone into overdrive with the impact. The team of geologists found evidence suggesting “that the Chicxulub impact initiated a substantial acceleration of Deccan volcanism within ~50 thousand years,” the blink of an eye in geologic time. They propose that, as the meteorite burrowed into the Earth’s crust, seismic waves propagated outward and downward through the planet, ultimately reconfiguring the magma conduits that fed the volcanoes on the Indian subcontinent. This re-plumbing theoretically could just as easily have constricted the magma flow and shut the volcanic complex off, but it had the opposite effect. After the impact-induced “state shift,” roughly 70% of Traps’ total volume of basalt was erupted, and with it, the gases that absorbed incoming sunlight. Renne also measured trace element compositions that revealed a consistent depth of rock melting both before and after the floodgates were opened, parrying a critique that bigger eruptions were due to a thinning overlying plate rather than a shock-wave induced re-configuration of the volcanoes’ conduits. The notion that supercharged volcanism played a key role in offing the dinosaurs is no historical anomaly: all other major mass extinctions coincide with large volcanic deposits. So while the Deccan traps may already have been well on their way to causing a similar die-off, the Chicxulub meteorite caused the perfect storm that changed the face of biology forever.