Congress' Attack on Geosciences Is a Dangerous Game 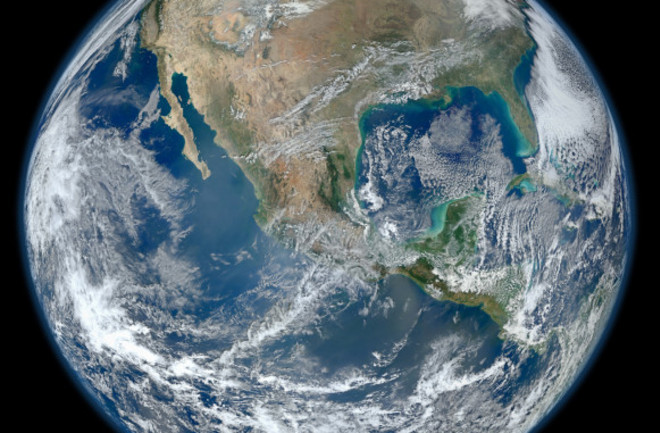 The Earth (you may be familiar with it). NASA The current U.S. Congress is trying desperately to brush science they don’t agree with under the rug. It’s a dangerous game where they are willing to risk the safety of the country because of their misguided ideological views on climate change (backed by powerful and wealthy donors) and end up putting the future of the country in danger by not only cutting funding to the Geosciences, but by portraying the field as outside the “core” and “hard” scienes. This Cold War against the study of the Earth has to be stopped if we want to secure a future for the country and the planet that allows continued growth and security for all people. Lamar Smith (R-TX), John Culberson (R-TX) in the House and Ted Cruz (R-TX) in the Senate are the Longhorn Trifecta most adamant to send Geosciences to the curb. They have all, in one way or another, called out research about how the Earth works, as “wasted” money that should be sent to a more, in their eyes, "fundamental science". They have used their positions as chairs of important science committees in the House and Senate to forward this agenda. What is a fundamental science in their view? Biology, Chemistry, Computing, and Math – all of which are fine pursuits on their own, but it is the Geosciences where all these disciplines are brought together to better understanding the inner and outer working of the only planet on which human live. Think of the topics that Geoscientists tackle every day. On the natural hazard front, it’s earthquakes, volcanoes, landslides, tsunamis, sinkholes and more. We live on active continent on an active planet, where these natural disasters, like the recent earthquake in Nepal, can strike. These disasters have the potential to kill thousands and cause billions of dollars of damage, so without a sound understanding of these phenomena through the Geosciences, we leave ourselves vulnerable. On the resource front, it is geoscientists who research how to find the metals, energy sources and water that we will need to continue to prosper as a nation. Beyond finding the resource, geoscientists also work on how to make mining operations more environmentally and socially sound through new methods of extraction and remediation. As resource use increases, we need more ways to make sure the supply lines for resources are open and it is Geosciences that allows this. Much of this work is done outside the auspices of corporations because the basic research in natural hazards and resources is what interests maybe geoscientists in academics, especially the ability to share their findings with colleagues and the public. It is very easy to exploit Geosciences for merely profit, so this research needs to be held outside of the walls of business so that the ramifications of the findings can be understood. However, the largest threat we may be facing today comes from the changing climate around us. As carbon dioxide increases in the atmosphere, carbon dioxide proven to be coming from humanity's burning of coal, natural gas and oil for the past 150 years, the climate has also been getting warmer globally (and definitely more unpredictable). It is through years of research on the planet, from pole to pole, that has proven that the climate is changing on Earth. The data is there, the evidence of change is mounting and continued research in the Geoscience will allow us to better capture what the impacts of these changes will be on us and future generations. So, why are the Texas Three trying to cut funding to such a vital field? It all comes down to politics. They all deny that climate change is either an issue that needs to be tackled or that humans are even the cause. This is fundamentally flawed logic that is increasingly difficult to say because of the preponderance of the data. Instead, they have chosen to punish the field that brought climate change to light and stifle future research in the discipline so they can sweep the study of the Earth under the rug (or just try to erase it from the record). They want to cast this as “fiscal responsibility” and “prioritizing sciences” but read it as it really is: political games that threaten the country and the planet. There is no other reason to both cut funding to the Geosciences and attempt to cast it outside the core of scientific research than to bolster their misguided battle against climate change. We can stop this. We can let our Congress know that we disagree strongly with this attack on Geosciences (especially the America Competes Act). We can go to the ballot box and vote out the politicians who support attacks on the sciences. Speak out to your friends and neighbors about the important of Earth Sciences. Geosciences is the core of our understanding of the resources we need to be productive and the natural hazards that threaten us every day. We need to realize that without this fundamental research on the Earth, we can never hope to solve the problems facing us and support our current quality of life. To say otherwise is to put on blinders to the world around us and hope that these problems just go away.