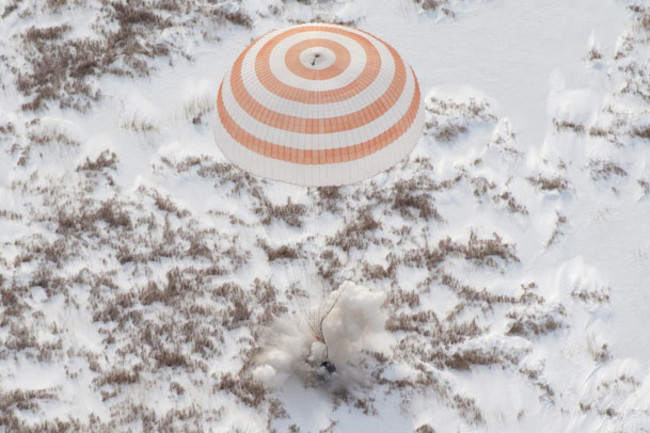 After six months in the International Space Station, two astronauts, a Russian and an American, returned to earth on Thursday, March 18th, 2010 in the Soyuz TMZ-16. The Soyuz dropped into four feet of snow in a remote region of Kazakhstan. NASA photographer Bill Ingalls, who has been shooting for NASA since 1991, says that one of the hardest parts of shooting a landing is trying to catch the rockets on the spacecraft that are supposed to fire milliseconds prior to landing, in order to cushion it. Ingalls arrived in the first group of recovery helicopters on the scene that circle the landing zone. The same snow that blocked the ground recovery vehicles from reaching the Soyuz also made it difficult for Ingalls to tell how high above the ground the it was, and when the rockets would fire. He shot at a high shutter speed using motor drive to capture it all. Ingalls had made his shot, but for the astronauts, the journey was hardly over. Coming all the way from outer space back to earth is only part of the commute from the Space Station. After recovery from the snow at the landing site near Arkalyk, these hardy spacemen then traveled two and a half hours by helicopter to Kustanay, Kazakhstan. There they participated in a ceremony at the airport, where the locals presented them with traditional hats. Then they hopped on a plane for another two and a half hour ride before finally coming to rest at Star City, outside of Moscow. Image courtesy Bill Ingalls/NASA