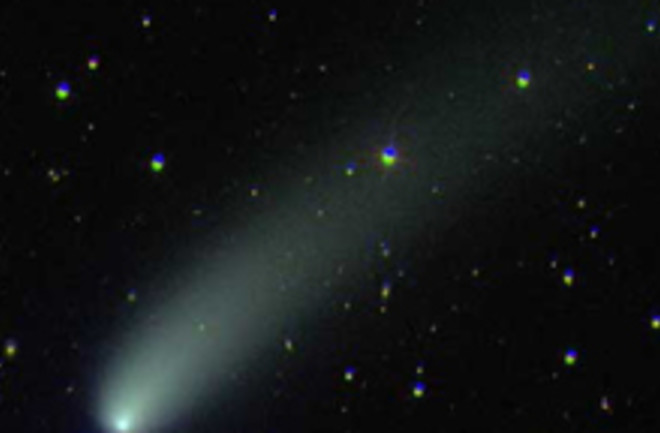 A comet from the deep space far beyond Pluto probably won't smash into the Earth and obliterate all life, reassuring researchers said today. New calculations have determined that most extinction events that have occurred over our planet's history probably weren't caused by killer comet showers, which bodes well for the future, too. The findings are both welcome and well-timed since only last week an object dramatically smashed into Jupiter; many researchers believe the culprit was a comet. In the new study, published in Science, researchers focused on long-period comets, which

are among the wild cards in a thick deck of cosmic threats. In contrast with short-period comets, such as Comet Halley and Comet Tempel-Tuttle, long-period comets trace insanely eccentric orbits that range out beyond Neptune, Pluto and the Kuiper Belt to a little-understood region on the solar system's edge known as the Oort Cloud [MSNBC].

The Oort cloud, which contains billions of small, icy objects, may extend from about 93 billion miles from the sun to as far as 9 trillion miles away.

Scientists have long thought that visible comets came mostly from the outer ring of the Oort cloud, because Saturn and Jupiter have enough gravity to eject from the solar system any comet that creeps in from the inner portion. Sometimes, those inner comets actually slam into the giant planets, which happened to Jupiter last week [Discovery News].

However, the researchers' computer models showed that the solar system's structure does allow some comets from the Oort cloud's inner ring to slip past our guardian gas giants. That region may even be the dominant source of long-period comets, the researchers found. But when the computer models were run for half a billion years, they found that the most powerful comet showers from the inner Oort cloud produced only two or three impacts with the Earth over that time. Lead author Nathan Kaib explains that the

However, Kaib notes that

asteroids, which unlike comets are made of rock not ice and tend not to have a "tail", could still pose a major "threat to life." ... Many scientists believe that a collision from an asteroid was responsible for the extinction of dinosaurs from the earth 65 million years ago [Telegraph].