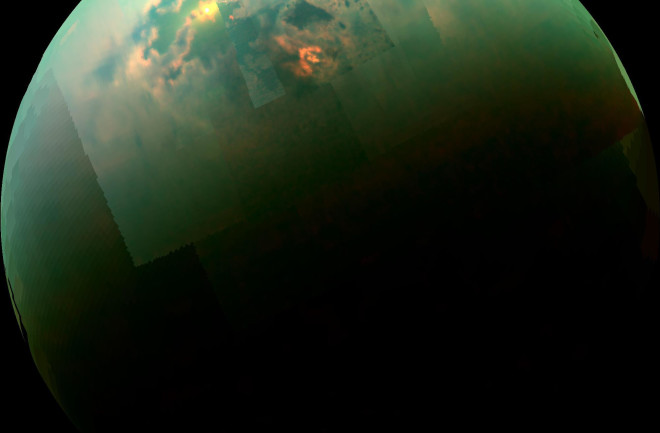 NASA’s Cassini orbiter captured the north pole on Saturn’s largest moon looking like a wet sidewalk after a bit of rain. This rainfall, which scientists take to signify a change in season on the moon, brought summer to Titan’s northern hemisphere earlier than scientists had predicted. This is the first time summer rainfall has ever been seen on the moon. But strangely, the rain came without any clouds.

The Cassini spacecraft may be long gone, but the data it collected in its long journey continues to reveal incredible truths about Saturn and its moons. Now, researchers from the University of Idaho in Moscow have used Cassini’s observations to pinpoint rainfall on Titan’s north pole. Noticing what is described as “the wet-sidewalk effect,” the team spotted light reflecting off of Titan’s north pole in a way that indicates the presence of rainfall.

But, the team has yet to find an explanation for the rainfall’s missing clouds. “The whole Titan community has been looking forward to seeing clouds and rains on Titan’s north pole, indicating the start of the northern summer,” lead study author Rajani Dhingra from the University of Idaho told the news site BGR. “But despite what the climate models had predicted, we weren’t even seeing any clouds. People called it the curious case of missing clouds.”

This image shows the "wet-sidewalk effect," or the reflecting light signaling rainfall on Titan. (Credit: NASA/JPL/University of Arizona/University of Idaho)

This image shows the “wet-sidewalk effect,” or the reflecting light signaling rainfall on Titan. (Credit: NASA/JPL/University of Arizona/University of Idaho)

Titan has many similarities to our home planet. Like Earth, Titan has seasons and rain. But on the rocky, Saturnian moon, they look a bit different. We have a water cycle here on Earth and Titan has the same cycle, except it has methane in place of water. But, while scientists aren’t sure exactly why, it rains much less on Titan than on our planet. In fact, during Cassini’s 13-year mission observing Saturn and its moons, it only spotted rain on Titan a few times. Additionally, since Titan’s gravity is about one-seventh of Earth’s gravity, the raindrops fall slower. The methane rain on Titan falls like how snowflakes fall on Earth, Elizabeth Turtle, a planetary scientist at Johns Hopkins Applied Physics Lab who was not involved with the study, explained in an email.

But, here on Earth, clouds always accompany rain. Even on Titan, when rain was spotted near the south pole, there were clouds. So “this is a particularly interesting mystery,” Turtle said, adding that while “there were some cloud-like features observed, but they were only detected at some wavelengths and not at all of the wavelengths they’d been observed at before. This is something we’re still trying to understand.” So, it seems at least for now, the absence of clouds alongside this rain will remain a mystery.

Along with the strange absence of clouds, the researchers in this new study have found that the summer weather near Titan’s north pole started up later than they anticipated. But this doesn’t necessarily mean that the summer was “late.”

“We don’t yet have a long enough record of Titan’s weather to know what’s typical and what’s not,” Turtle said. Seasons on Titan can last for several Earth years. And, in general, as researchers have so far observed, weather changes have usually taken longer than predicted. So, perhaps Titan’s seasons are just a bit slower to change than scientists have previously thought.