Citizen Science at the California Academy of Sciences

Editors Note: This is a guest post by Alison Young, Citizen Science Engagement Coordinator and Rebecca Johnson, Citizen Science Research Coordinator at the California Academy of Sciences. It is part of a SciStarter series highlighting Citizen Science at Science Centers. The authors talk about how the Academy connects communities to their local biodiversity through citizen science with the help of iNaturalist, their technology partner. iNaturalist is also part of more than 800 citizen science projects on SciStarter. Check them out and become a naturalist yourself! 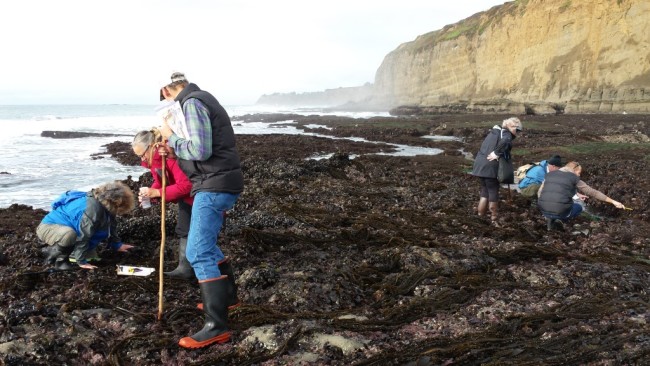 California Academy of Sciences citizen science volunteers doing long-term monitoring surveys at Pillar Point reef. (Image Credit: California Academy of Sciences) The mission of the California Academy of Sciences is to explore, explain, and sustain the natural world. Our museum floor teaches the public about the science of the natural world around them, while our researchers work to understand the evolutionary history of life on earth, document biodiversity, and discover new species the in hotspots around the world. The aim of our citizen science program is to engage communities in Academy biodiversity research and, through this participation, increase science learning and connect people to biodiversity all around them. All of our projects focus on biodiversity discovery and documentation, and all of our projects are undertaken in conjunction with a conservation partner. We are building a community of naturalists of all ages and at the same time providing our scientists and partners with valuable data required to better understand and conserve biodiversity. When starting our citizen science program, we first developed projects where volunteers could undertake focused surveys in unique Bay Area locations to build a comprehensive biodiversity baseline. One current project is a plant diversity survey in conjunction with the Marin Municipal Water District that includes making collections to house in the Academy’s herbarium, on Mt. Tamalpais, north of San Francisco... Our other on-going project consists of long-term species monitoring at Pillar Point reef (home to the Mavericks surf contest), south of San Francisco on the San Mateo coast, in partnership with the Gulf of the Farallones National Marine Sanctuary. These types of projects not only allow the Academy and our partners to better monitor change going forward, but also provide data that can be compared to the historic collections at the Academy and other natural history museums to help us understand change that has already occurred. Our program also promotes science literacy and stewardship. Outside evaluation confirmed our volunteers had increased understanding of the importance of biodiversity and its contribution to the health and resiliency of ecosystems, and also came away with stronger connections to these local environments. As these intensive, long-term surveys progressed we realized that it’s a special type of volunteer who’s willing to spend eight hours on the side of a mountain documenting and collecting plants, or willing to meet us for a 5:30 am low tide for intertidal monitoring. We also didn’t want to perpetuate the idea that “nature” is only something remote, or away from the city. So we set about finding other ways to engage people in biodiversity observation: in their own backyards, and in whatever timeframe worked best for them. 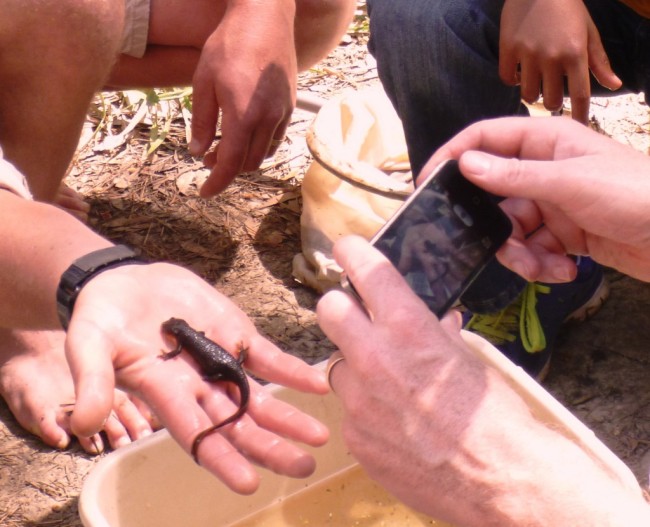 Citizen science volunteers engage in a grassroots bioblitz in a local San Francisco Bay Area park using their smartphones and iNaturalist. (Image Credit: California Academy of Sciences) To that end, we began to think about the best ways we could work together with our new technology partner, iNaturalist. iNaturalist is both an app and a website for uploading and sharing observations of the natural world. The power of iNaturalist lies in its community: a community of nature lovers, of people just starting to get interested in the natural world, or people who want to know what that amazing insect or plant is that they found in their backyard. The community also turns those observations into valuable data that are shared with other biodiversity databases. We had already been using iNaturalist in our thorough place-based surveys, but with so many of us walking around with a smartphone in our pocket, we wanted to connect people to the nature in their everyday lives: around their home, in their local parks, on their walk to work.We started hosting a series of grassroots bioblitzes with the all-volunteer group Nerds for Nature as well as other local partners. Instead of the intensive, scientist-dependent, 24-hour traditional bioblitz model, we gathered in our smaller Bay Area city parks and open spaces, usually for half a day. Many of these small parks have never had a biological inventory, so we work with a management organization or a friends group that is interested in building a species list for the location. The bioblitzes are open to everyone, we simply asked that people make observations either with their phone or a digital camera and upload them to iNaturalist. In this way, we have been able to engage communities and give them a new way to experience their local parks: through the lens of a naturalist. Over the past year and a half, we’ve helped organize close to a dozen bioblitzes, and close to a thousand volunteers have made over ten thousand observations. For an example of the results of one of our bioblitzes, click here: Green Hairstreak Corridor Bioblitz. What’s Next? The next steps for Citizen Science at the Academy are two-fold. First, create a comprehensive biodiversity inventory of San Francisco, working closely with city government and involving residents and visitors. This will help answer science and management questions and inform policy and conservation decisions. San Francisco is amazingly diverse in its culture, food and architecture… and together with our partners we want to make sure its biodiversity is also recognized, appreciated and protected. Secondly, we want to work locally building scalable models to create tailorable resources and hone best engagement practices both inside our walls and out in the community. Using iNaturalist, we hope to organize local public participation across global networks, generating the knowledge and coordinating the action needed to save nature and our relationship to it at local and global scales, and changing how dynamic, scalable biodiversity data are generated, drive science, and inform policy.