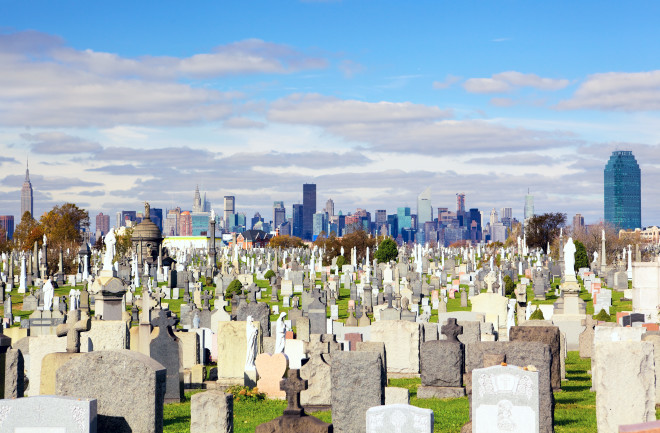 In 2016, a contractor remodeling a San Francisco duplex hit something hard with his shovel. A few shovelfuls more unearthed a metal box with two windows.

It was a child-sized coffin containing the remains of a blond toddler with a rosary draped across her chest and lavender sprigs placed gently in her curly hair. It took more than a year for a team of archaeologists, genealogists and historical investigators to find out who the child was and why her casket was buried underneath a residence in the Lone Mountain neighborhood of the Richmond District.

Turns out, the land had been a cemetery when the child died in the 1870s. The waterfront property was in high demand, especially as the city grew in population. The cemetery was moved to make room for the living— or so people thought.

Hidden graves are surprisingly common in the U.S. Major cities including Chicago, Milwaukee, New York and Philadelphia, all have cemeteries that were moved in the late 1800s or early 1900s. In some instances, family members didn’t claim the graves and the caskets were left behind. In other circumstances, workers either missed plots or knowingly falsified records stating the bodies were moved. Either way, parks, museums, schools, and homes were eventually built on top.

Chicago’s Lincoln Park is currently home to baseball diamonds, greenery, a zoo, and a botanical garden — all overlooking the shores of Lake Michigan. The nearby neighborhood streets are lined with fashionable restaurants and upscale residences.

The park, however, once served as the city’s only cemetery from the 1840s to the 1860s.  In the 1860s, advocates for moving the cemetery cited public health concerns. One physician, John H. Rauch, published papers arguing the graves were below the water table and risked seeping bacteria and disease into the lake, thereby tainting the city’s water supply.

Using the science of the time, Rauch relied on miasma theory and warned that diseases could vaporize from the burial grounds and be carried by winds into the city. He argued that graves containing smallpox or tuberculosis threatened to release fatal vapors into the air and infect the living.

There were other pressures on moving the cemetery. Urban planners saw the lakefront as beautiful property fit for a park. There was also threat of a lawsuit by the Milliman family, who claimed the city illegally confiscated their land to build part of the cemetery. Exhuming — or at least claiming to exhume — graves was cheaper than a lawsuit.

Casket removal began in the 1860s and became an everyday sight, even as city planners faced rebuilding after the Great Chicago Fire of 1871. “From before the fire into the 1880s, there were disinterments happening. There was a constant flow of carts carrying graves. It was so frequent that it wasn’t news,” says Pamela Bannos, an art professor at Northwestern University who began investigating the forgotten cemetery in 2008.

Bannos found evidence that many cemetery plots were never claimed and therefore not moved. Because the plots were deeded, the city required a family member to authorize removal. When families didn’t step forward, the city eventually built the park and baseball diamonds over the forgotten graves.

Bannos’ extensive research is listed at her website, Hidden Truths. Few people in the city realize there are thousands of graves underneath Lincoln Park, even though markers remain.

“I’m stunned that people still don’t know,” Bannos says. “How did we lose this history? I wanted to find out.”

City officials in Chicago didn’t hide the fact that thousands of bodies were unmoved. Bannos says there wasn’t a big scandal — even though miasma had been cited as a great need to relocate the bodies.  In the coming years, historians paid little attention to the unmoved graves, and subsequent historians continued the cycle of forgetting.

In other cities, workers tasked with moving graves accidentally missed a few plots. But in some instances, they falsified records and left the graves intact. In Philadelphia, construction crews have unearthed grave sites that were falsely recorded as moved.

In 2013, for example, a construction crew at a school playground found wooden caskets from the 1800s under the asphalt. The school had been built in the 1950s at the site of a cemetery, and workers at the time were supposed to have removed the remains.

A few years later, a construction crew at a real estate development found almost 500 colonial graves dating back to the  early 1700s. Records from the 1860s incorrectly listed the cemetery as moved to a new location, Mount Moriah. Although the developer was displeased by the bones, historians and archeologists were excited by the find. Rutgers University-Camden is allowed to examine the remains until 2023. Then they will be buried at Mount Moriah.

The eventual internment at Mount Moriah is an unusual conclusion because graves in hidden burial sites have long been disrespected. In 1909, the city of San Francisco wanted to move the city cemetery to make way for a golf course. Workers removed the headstones, which were later repurposed for ocean seawalls, and left the graves intact. In the early 1920s, an art museum was built on the site. In 1992, a crew doing a seismic retrofitting found more than 900 burials. A photographer, Richard Barnes, documented the discovery, and his images show wooden boxes crammed with dirt and skeletal remains. The uncovered remains were studied by scientists and reburied in another cemetery. Archeologists estimate thousands more remain.

The little toddler in San Francisco, however, had a more dignified second burial. The investigative team researching her case used an old cemetery map to narrow the possibilities to two children. They created family trees and found one of the girls had a great nephew living in the area. He supplied a DNA sample, which scientists compared with a sample from her hair, and determined he was indeed a descendant.

Other analysis helped determine how she died. The child, Edith Howard Cook, was born into a prominent San Francisco family. She died in October 1876, just before her third birthday, from a protein deficiency, possibly caused by an infectious disease.

The group arranged for little Edith to have a new grave. Her tiny metal casket was placed in a larger, wooden one and buried with a tombstone bearing her name.