CZ-11 WEY blasted off on Wednesday, carrying goods into space. 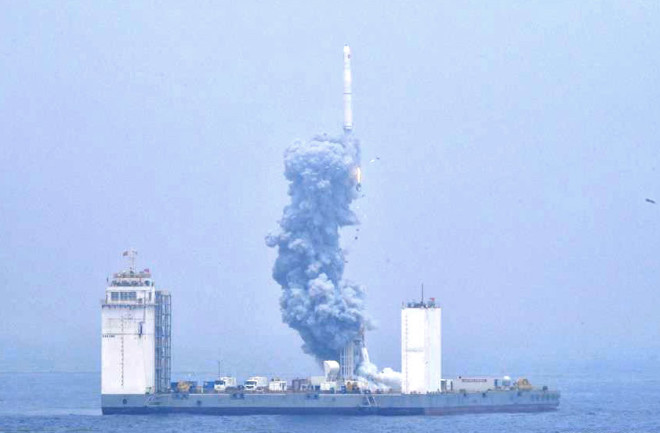 In 2019, China became just the third country (behind the U.S. and Russia) to launch satellites into orbit from a platform at sea. (Credit: Courtesy Xinhua News Agency)

On Wednesday, China became the third country to conduct a sea-based space launch when it sent a Long March 11 rocket into orbit carrying experimental tech and five commercial satellites.

The rocket, also named “CZ-11 WEY,” blasted off from a platform in the Yellow Sea built from a modified drilling rig off the coast of the Shandong province. The launch platform itself was announced in a government press release earlier this week. In that initial June 3 release, China’s State Council said the launch would happen by the end of the year.

“This mission was initially intended as a technological demonstration of a seaborne launch, but we later decided to make it a commercial operation,” Long March program manager Li Tongyu was quoted as saying in an official Chinese government media release.

The world’s first sea launch happened back in 1967 when a United States carrier rocket was launched off the cost of Kenya at the Italian-owned Luigi Broglio Space Center. The Russian-based company, Sea Launch, also completed more than 30 successful sea-based launches between 1999 and 2014.

Sea launches are attractive because they can sit closer to the equator, using Earth’s rotation to give the rocket a greater speed boost and reducing the amount of energy it takes to get into space. It also poses less of a danger for densely populated areas along the rocket’s trajectory.

China’s space program has grown rapidly since 2003 when it became the third country to independently achieve human spaceflight. It’s now one of the major players in the world of space exploration alongside the United States and Russia. China also landed on the Moon earlier this year and has plans to send a mission to Mars in 2020.

The Long March rocket program started in 2010, and more than 300 rockets have now been launched in the Long March series.