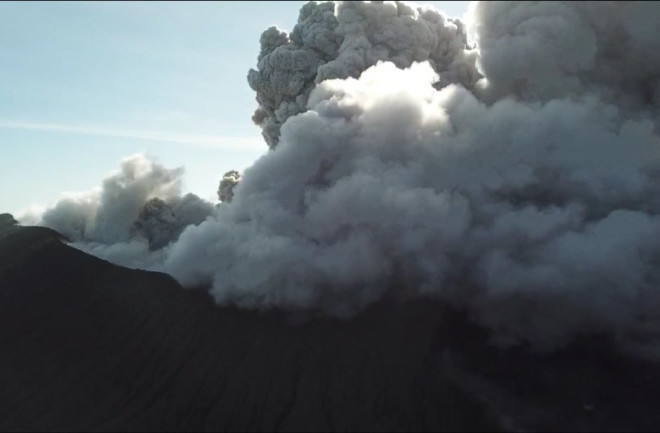 The eruption plume from Kirishima's Shinmoedake crater during a March 7, 2018 eruption. Image by James Reynolds, used by permission. Yesterday, Shinmoedake in Japan produced its largest eruption in almost 7 years. The volcano, which is part of the large Kirishima complex of volcanoes, sent ash and volcanic debris to over 3.5 kilometers (12,000 feet) over the volcano. The volcano was last restless in October 2017, when it produced some smaller ash plumes that reached up to a couple kilometers over the volcano, but this blast was much more akin to the 2011 eruption. Recent reports from Japan say that the volcano "has been erupting since March 1", so my guess is smaller plumes, possibly steam-and-ash, may have preceded this larger blast. James Reynolds (Earth Uncut TV) happened to be able to film some of this new eruptive activity at Kirishima with a drone an it is impressive!

Incredible day at #Shinmoedake#volcano in #Japan - explosive eruptions and ash venting as new lava dome forms in the crater. Note this is cached footage from Mavic Pro so contains a few skipped frames etc #新燃岳#火山pic.twitter.com/xYG3pUiL8m

You can really see the pulsation of the eruption in this video as new waves of explosions come from the vent, sending the volcanic debris and ash (also known as tephra) up into the sky. James also caught some impressive volcanic audio as well, with the roar from the eruption echoing around Kirishima.

Today was without doubt the most impressing volcanic “audio” I’ve ever witnessed - at some points the explosions were echoing off surrounding peaks. Take a watch and crank up the volume! #Shinmoedake#volcano#Japanpic.twitter.com/DSU0kQLlpC

Planet caught the eruption as it was happening and the satellite views show the plume clearly and as Dr. Carn points out in the tweet, the "pancake dome" can barely be seen - likely a new dome of andesite lava similar to what occurred during the 2011 eruptions at Kirishima.

Eruption plume from #Shinmoedake#volcano was captured beautifully in @planetlabs ?️ imagery on March 6 at 01:23 UTC (10:23 local time). You can just make out the 'pancake' lava dome peeking out beneath the plume. @fikgmpic.twitter.com/bUydjpHhZ5

Mount #Shinmoedake seen erupting from space by #Japan's Himawari-8 satellite. The #volcano sent a plume of ash 7,500 feet into the sky - its biggest eruption since 2011. More imagery: https://t.co/GNEr1TaoDOpic.twitter.com/Wl1C0gX5tD▶ NOAASatellites

images from Kirishima tonight show no plume but the glow from the new lava dome is clear on the low and high clouds above the Shinmoedake crater.

Webcam image of Kirishima seen on the evening of March 7, 2018. The glow from the new lava dome is clearly visible. JMA. The ashy nature of the eruption meant that dozens of flights in and out of the Kagoshima airport

were briefly cancelled. Many cities and towns around the volcano were blanketed with ash from the blast as well (see below).

has Kirishima on alert level 3, meaning not to approach the volcano and a 3-km exclusion zone has been established around the volcano. With a new lava dome in the crater (see above), there is a significant likelihood that more explosions could follow as pressure builds under the dome.