Ceres Isn't the Icy Dwarf Planet We Thought It Was 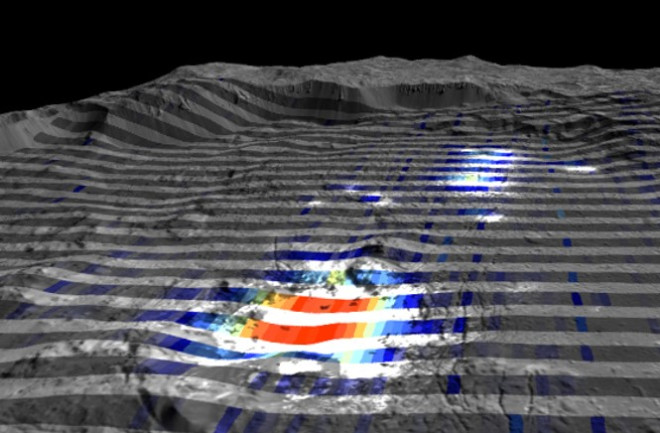 In this overlaid image, Dawn imaging data is overlaid with spectroscopic composition to show the chemicals present on the surface. (Credit: INAF/ASI/NASA/DLR/MPS)

The asteroid belt hides lots of mysteries of the solar system’s past, but perhaps no place holds more mysteries than Ceres. It’s an oddball place — a dwarf planet in the midst of our solar system’s belt of smaller debris. And it’s an ancient world possibly left over from the era when the planets first came together.

New findings from the NASA Dawn Vesta/Ceres probe published today in Nature and Nature Geosciences only make it more intriguing.

The paper published in Nature indicates that Ceres has traveled a long way, with a trail of materials that make it likely Ceres had a similar origin to icy moons and Kuiper Belt objects in the outer solar system. This includes the salts that form bright spots — and possibly have an aquatic origin — and ammonium carbonate deposits that indicate the presence of ammonia, most frequently found in the Neptune and Uranus systems and the Kuiper Belt.

“Ceres is probably from the outer solar system or made from materials that formed far away from the Sun,” says Maria Cristina de Sanctis, a planetary scientist at the National Institute of Astrophysics in Italy and lead author of the paper.

That could mean that large debris from the outer solar system migrated in to form Ceres in situ. Carol Raymond, a small bodies program educator at NASA-JPL and an author on the Nature Geosciences paper, says she believes that it formed “outside in,” meaning that it likely took planetary form in the solar system’s outskirts and then migrated in.

The Geosciences paper makes Ceres even weirder, though. Whereas Ceres seems to have a lot in common with icy bodies in the outer solar system, there’s a key component missing: abundant ices.

That’s not to say that Ceres does not contain ices. But it seems to have less ice than previously believed. Rather than being mostly ices (as, say, Enceladus or Pluto are), Ceres is only 30 to 40 percent ice. The craters, such as Occator Crater where the bright salt lights shine, are far too deep. Were there is ice present, many of the craters across the surface would appear more geologically “young.”

“The outer shell can’t be dominated by water ice,” Raymond says. “It appears to be a mixture of rock, ice, and salt.”

Raymond says this still doesn’t preclude the possibility of an ocean, past or present, underneath the outer shell of Ceres, but that it would be much less watery than previously suggested. If anything, de Sanctis’ research proves that there’s still something there, as there’s still chemical reactions present that can only be produced by water ice, including the production of carbonates and salts. We just may need a new model to figure out what that is.

Dawn could reveal more information about Ceres, but there’s a hint that follow-up missions could figure out even more. It could find a frozen ocean. It could find a liquid one. It could find one that disappeared long ago. (On that last one, Raymond says, “That is a viable hypotheses and one the team is pursuing.”)

But most of all, it could give us a clue to the early solar system that our planets can’t.

“I think that Ceres can reveal a lot of information about the formation of the solar system,” de Sanctis says.