New insights brought to you by the Dawn spacecraft. 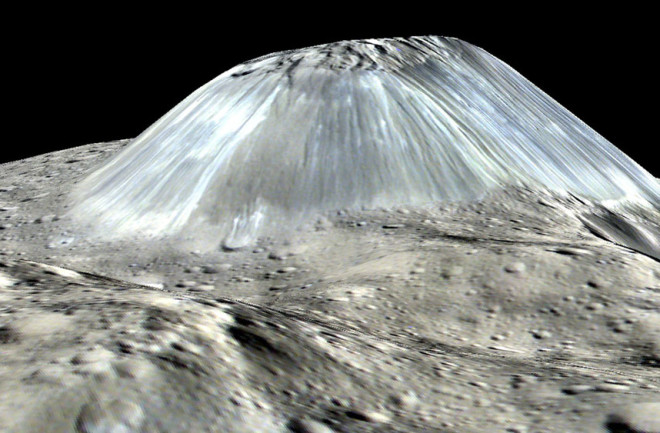 After comparing it with domes on Earth, scientists now believe Ahuna Mons formed when a slushy mix of internal ice and natural antifreeze reached the surface along a duct — just as magma builds volcanoes on our planet. Once on Ceres’ surface, the Slurpee-like material couldn’t flow far, and it slowly built up a 3-mile-high ice volcano.

Discovering Ahuna Mons’ icy identity, as reported in Science in September, adds to an emerging picture of Ceres as a geologically active and watery world. This dwarf planet should be pockmarked with craters up to 500 miles across, but scientists haven’t measured one even half that size. They think some geological process is erasing the craters over hundreds of millions or perhaps a billion years. Another 2016 study found that minerals called carbonates — which need water to form — are spread across the dwarf planet, suggesting that Ceres once hosted an ancient ocean.

These hints came from Dawn, a NASA spacecraft orbiting Ceres since March 2015. “This is a geologically complex alien world, not just a chunk of rock,” says Dawn’s chief engineer, Marc Rayman.