These images are the outtakes from our March 2013 feature "Saturnalia." Read the whole thing here.

Cassini snagged this photo from within Saturn's shadow while orbiting 500,000 miles from the planet's surface. The sun is behind Saturn here, backlighting its surface and rings in this color-enhanced photo.

Because the Earth is sandwiched between Saturn and the sun, we could never get such a view without the aid of the orbiting spacecraft. This photo op, on October 17, 2012, is a rarity even for Cassini. The last time the spacecraft was able to capture such an image was over six years ago, in September 2006.

Look closely to see two of Saturn's moons hiding in the lower left of the image. Enceladus hovers just below the rings and Tethys just below that. 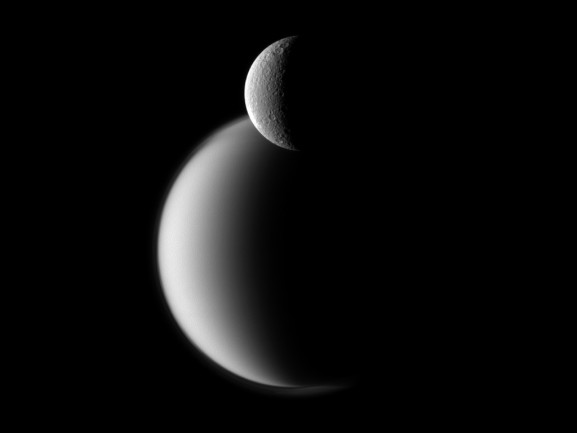 Here Cassini's cameras zoom in on two moons of Saturn: Rhea and Titan.

In the foreground, craters are visible on the icy surface of Rhea. The moon is about 25 percent rock and 75 percent water ice. Giovanni Domenico Cassini, the spacecraft's namesake, was the first to discover this moon in 1672, which he named for the mother of the gods in Greek mythology.

Titan's hazy atmosphere appears as a smooth backdrop for its mini moon sister. Despite their close appearance, Cassini was still 808,000 miles from Rhea and 1.2 million miles from Titan when the image was taken on December 10, 2011.

A total of 62 moons have been found orbiting the planet, 53 of which are named. 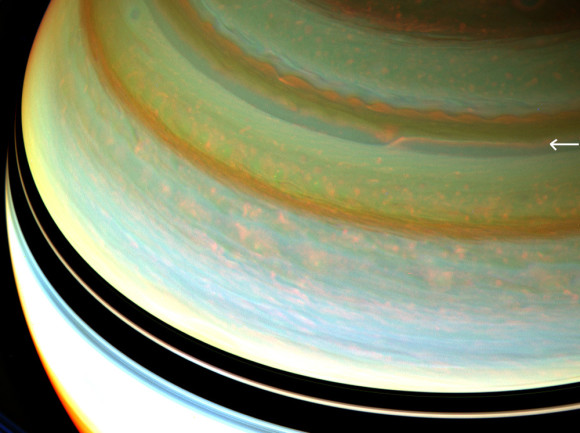 This image is a false-color composite of three images showing the depths of the cloud layers. Cassini captured these views on January 13, 2008 from a vantage point some 810,000 miles away.

The arrow on the upper right edge of the image points to a particularly strong jet stream churning through Saturn's northern hemisphere. This jet stream, which appears as a thin orange line, moves west along a specific line of latitude on the planet's surface. 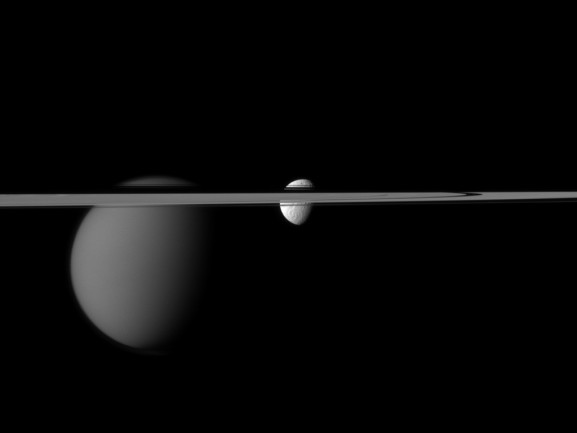 In this image, taken on December 7, 2011, the line of Saturn's rings disrupts Cassini's view of the moons Tethys, on the right, and Titan, on the left.

Tethys was another of the four moons discovered by Giovanni Domenico Cassini, this one in 1684. Tethys is the second brightest of Saturn's moons, after Enceladus.

Titan is Saturn's largest moon by far. Its diameter is 50 percent larger than Earth's moon. In fact, only one moon in the entire solar system—Jupiter's Ganymede—is larger than Titan. 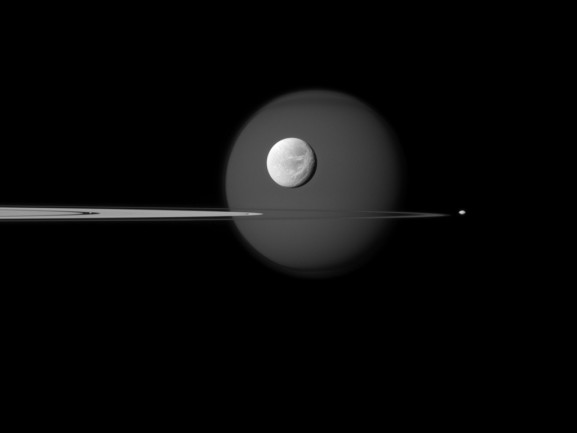 In this composition, four of Saturn's moons can be seen within the planet's rings.

Titan hangs in the background of the image. With a diameter of 3,200 miles, it dwarfs the other visible moons. Titan's hazy appearance is due to its nitrogen-rich atmosphere.

The next smaller moon, Dione, takes center stage with its telltale ice cliffs visible as wisps on its surface. Tiny Pandora orbits just beyond the reach of Saturn's rings, on the far right side of the image, while Pan is barely visible, tucked into a gap in the rings on the left side of the image. 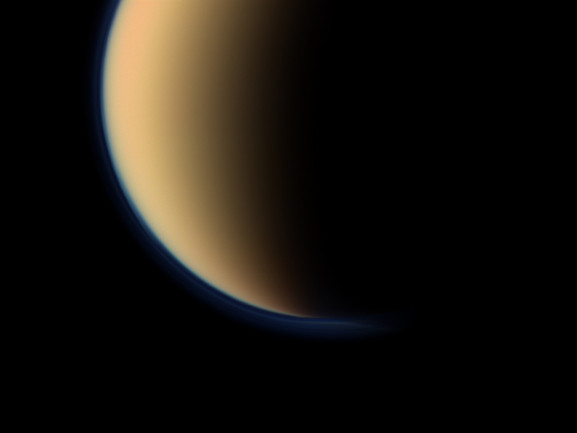 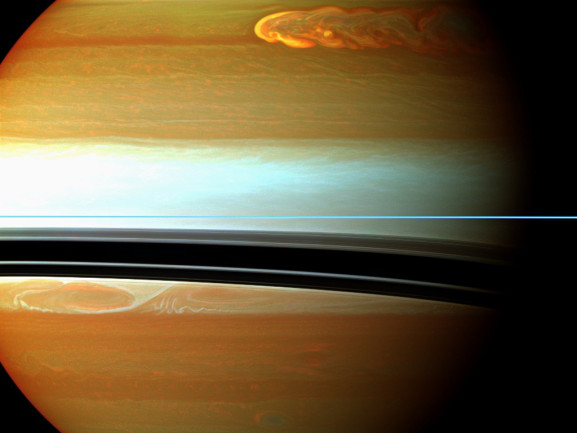 The fireball raging through the top of this image is actually a storm. It had already been on the move through the planet's atmosphere for several months when the images for this false-color mosaic were taken on January 11, 2011.

Twelve images were taken over the course of an hour, each with a different filter to show the varying degrees of methane absorption in the layers of the planet's atmosphere. Clouds deep in the lower atmosphere appear red and orange. The next higher are yellow and green. High clouds and haze appear blue and white. The bright blue color is the planet's rings which are outside the atmosphere altogether. 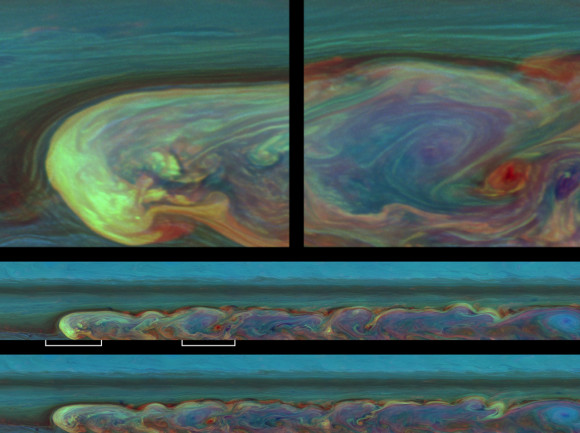 These four images track the largest and most intense storm observed by Cassini. The two lower images were taken 11 hours apart—the length of one day on Saturn. Each composite image combines 84 different shots taken on February 26, 2011. The two top images—the storm's head (left) and middle (right)—are enlargements from the image below them, as indicated by the white subset lines. The storm's head was moving at 63 miles an hour.

The storm clouds are likely water covered by crystallized ammonia, and they are traveling 60 miles above the normal, non-storm clouds. The false colors represent the altitudes of the various cloud layers—blue being the highest and red being the lowest. Lightning occurs in the lowest layer of the atmosphere. 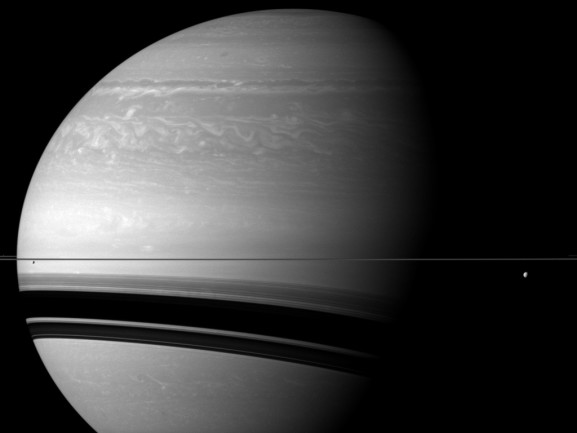 Taken at a distance of 1.3 million miles, this image shows Saturn dwarfing its three visible moons on December 7, 2011. The largest moon shown here is Tethys, which measures 660 miles across, or about the same distance as a drive along California's coast. Tethys is visible below the rings on the right side of the image.

On the left side of the image, below the rings, is Enceladus, a mere 313 miles across.

The third moon, Pandora, is barely visible in this view. With a diameter of only 50 miles, this moon appears as a small grey speck sitting atop the rings on the left edge of the image. It had to be brightened in relation to the rest of the image in order to be seen. A Pandora-length roadtrip would be little more than a drive from L.A. to the beach and back. 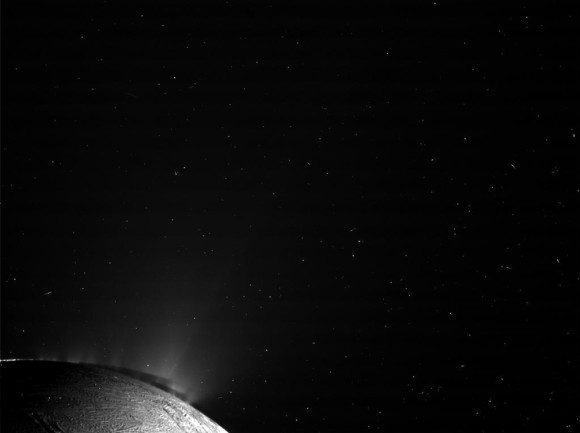 This image of Enceladus from January 31, 2011 shows an eruption of one of the moon's cryovolcanoes. These icy jets spew water and ice, which are either drawn into Saturn's rings or fall back as precipitation on the moon, Saturn's sixth-largest. Enceladus's surface water makes it one of the most promising places for finding extraterrestrial life.

For more background on these stunning photos, read the feature in our March 2013 issue. 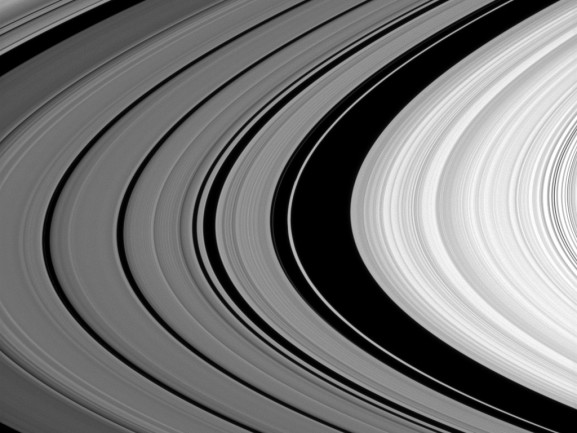 Saturn has seven main rings, named for the first seven letters of the alphabet (A through G). Between them are gaps and divisions, where moons and other debris orbit. Here the Cassini spacecraft looks between Saturn's A and B rings to see the gaps and ringlets contained within the Cassini Division.