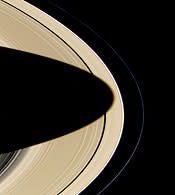 Saturn’s shadowed rings, seen from Cassini, frame the planet’s invisible radiation belts. A newly discovered belt lies unseen to the left, between the rings and the planet.

While it racks up amazing images of Saturn and its moons, NASA’s Cassini spacecraft is also studying the planet’s radiation belts—invisible clouds of charged particles trapped in Saturn’s vast magnetic field. These studies have already turned up a new, unexpected belt tucked between the innermost ring and the planet’s cloud tops. Planetary scientists had thought that the rings kept the radiation belts far from the planet, says Don Mitchell of Johns Hopkins University, because charged particles are absorbed when they hit debris in the rings. Saturn evidently thinks otherwise.

Mitchell is puzzling over how particles leak through to create this weak but distinct inner radiation belt. He theorizes that some positively charged high-energy particles, including protons and helium ions, in the outer radiation belts acquire negatively charged electrons from the cold gases around Saturn. The combination yields neutral atoms that can move freely through a magnetic field. A small fraction of these particles sneaks between the rings and the planet before losing electrons to become positively charged once again.