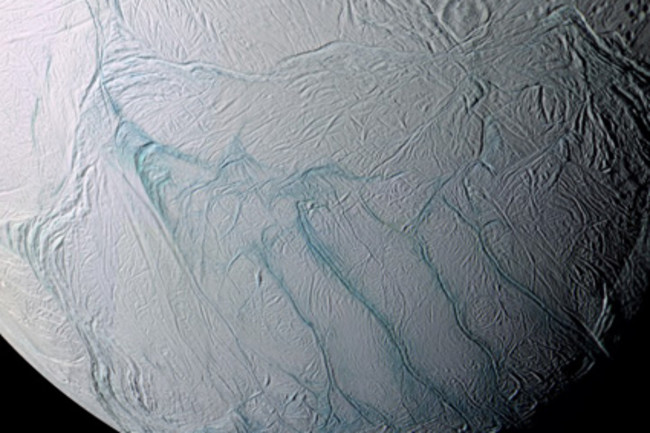 Five years ago, the Cassini spacecraft first detected plumes of water ice emanating from Saturn's moon Enceladus, making the moon one of the best hopes for finding life somewhere else in the solar system. Astronomers have argued over whether or not those jets come from a subsurface ocean of liquid water, but new findings by Cassini provide evidence that water could indeed be sloshing around beneath the frozen surface of this small moon. During a 2008 pass through the plumes, the spacecraft found negatively charged water molecules.

Back home this short-lived type of ion is produced where water is moving, such as in waterfalls or crashing ocean waves [Scientific American]

. Researcher Andrew Coates led the study, which is coming out in the journal Icarus. Besides the water ions, the team also found negatively charged hydrocarbons—huge ions that could result from Saturn's magnetic field and the sun's ultraviolet rays interacting with the atmosphere of Enceladus. Researchers find the combination of ions enticing.

"While it's no surprise that there is water there, these short-lived ions are extra evidence for sub-surface water and where there's water, carbon and energy, some of the major ingredients for life are present," said Dr Coates [BBC News]

. Previous studies have shown that the Enceladus plumes contain ammonia, which could act as an antifreeze to keep an ocean in liquid state, and others have argued that the plumes are spewing sodium, which would indicate that liquid water had been in contact with rocks that leach salt. Cassini's new ion findings make Enceladus look a little more like its big brother, the huge and also hugely interesting Saturnian moon of Titan.

In fact, the same plasma spectrometer on board Cassini has been used to confirm the presence of large negative hydrocarbon ions high in the atmosphere of Titan, indicating the presence of an organic mix of chemicals called "tholins" on Titan's surface [Discovery News]