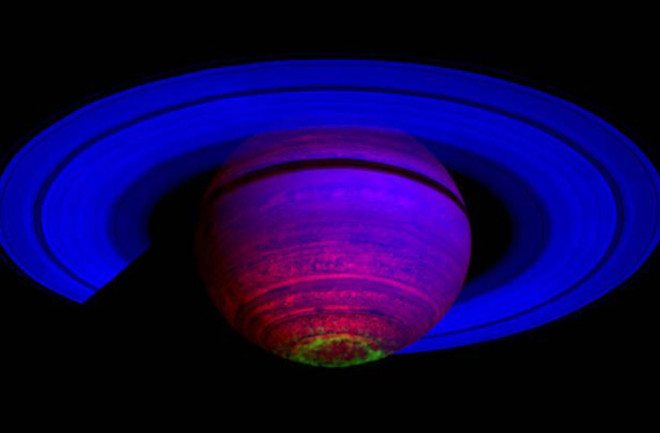 Chalk up one more mind-blowingly beautiful Saturn image to the Cassini spacecraft. The fruitful mission beamed home this stunner as part of a video of the auroras on the sixth planet.

Auroras on Saturn form like those on Earth, when charged particles in the solar wind stream down the planet's magnetic field towards its poles, where they excite gas in the upper atmosphere to glow. Some auroras on the ringed planet are also triggered when some of its moons, which are electrically conducting, move through the charged gas surrounding Saturn. [New Scientist]

Aside from giving us something new to gawk at, Cassini

's pictures of the Saturnian aurora could further elucidate those differences

between the gas giant's light shows and our planet's auroras. Besides Saturn's many moons, other magnetic forces—like the direction of Saturn's magnetic field—appear to play a large role there, making the process more complicated than the solar wind-dominated auroras here on Earth.

"Saturn's aurorae are very complex and we are only just beginning to understand all the factors involved," Stallard said. "This study will provide a broader view of the wide variety of different auroral features that can be seen, and will allow us to better understand what controls these changes in appearance." [Space.com]

This Cassini image of the light show near Saturn

's pole is not one picture, but many:

The infrared auroras show up in green in this false-color composite from NASA's Cassini spacecraft, stitched together from 65 individual observations taken by the probe's Visual and Infrared Mapping Spectrometer in 2008. According to a NASA news release, the auroral light appears in the near infrared at wavelengths of three to four microns. Blue designates reflected sunlight at two microns, and red represents thermal emissions at five microns. [Scientific American]

Tom Stallard and his team presented this work last Friday in Rome at the European Planetary Science Congress. For more ravishing shots from Cassini, check out the previous posts here at 80beats

or over on Bad Astronomy

. Related Content: 80beats: Saturn’s Rings May Have Birthed Its Small Moons—and More Could Be Coming

DISCOVER: Happy Birthday, Cassini--and Thanks for the Great Images