Captured on Video: Flash from Meteor Crash on the Moon 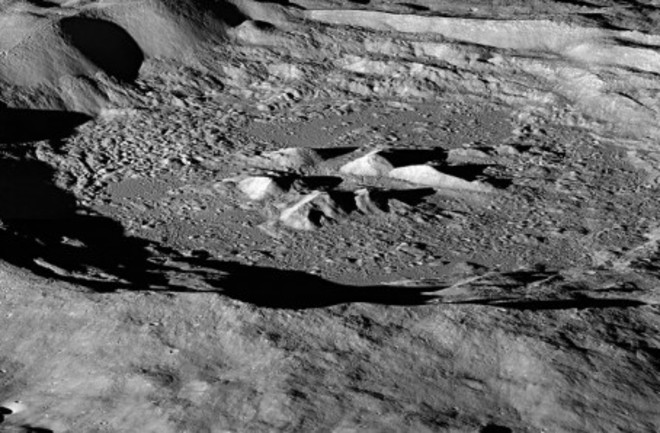 The moon's Hayn Crater, as photographed by NASA's Lunar Reconnaissance Orbiter satellite. The relatively young crater is 54 miles (87 km) in diameter. (Source: NASA/GSFC/Arizona State University) I guess I'm on a bit of a lunar kick. Earlier today I posted a beautiful photo of the Moon floating above Earth's glowing limb. And then I ran across an intriguing news item about scientists capturing video of a bright flash on the Moon caused by a meteor crash. I've included the video below, but I thought I would lead off with the spectacular image above of the Hayn Crater on the moon, captured by NASA's Lunar Reconnaissance Orbiter. As described by the NASA Goddard Space Flight Center in its Flickr stream:

The central peak complex in the image above is dramatically illuminated by the low Sun casting long shadows across the crater floor. The floor of Hayn crater contains spectacular remnants of the impact event: impact melt, slump blocks, and complex debris. In some areas, rocks on the floor have cracked and eroded into fields of boulders.

Now there's a new lunar crater, thanks to the meteorite impact on Sept. 11, 2013 and just described in a paper in the Monthly Notices of the Royal Astronomical Society. Here's the video showing the impact flash, as seen by two telescopes in the south of Spain that were searching for lunar impact events:

For a longer video including animations and explanation, go here. The flash lasted for eight seconds, and would have been visible to the naked eye on Earth, had anyone happened to be watching. It was the longest and brightest confirmed impact flash ever observed on the Moon. Jose Maria Madiedo of the University of Huelva and his colleagues estimate the meteoroid was about the mass of a small car and was traveling at 38,000 miles per hour (61,000 km/hour). When the rock hit the moon, the energy released equalled that from 15.6 tons of TNT (plus or minus 2.5 tons). This giant explosion created a new crater with a diameter of around 40 meters, or about half a football field. That's obviously much smaller than Hayn Crater. So imagine the gargantuan explosion that gouged that one out! Countless craters, both large and small, pockmark the face of the moon, thanks to 4.5 billion years of bombardment from rocks of all sizes. Unlike Earth, the moon has no protection against this pummeling — because it lacks an atmosphere. So when you get a chance, have a look at my earlier post (here's the link again) showing the moon, and look closely at the blue glow. That's our atmosphere. We should give thanks for it.