Bosons, Fermions and Anyons: What Are the Three Particle Kingdoms in the Quantum World?

The totality of existence can be divided into these categories, each with a vital role in the structure of the universe. 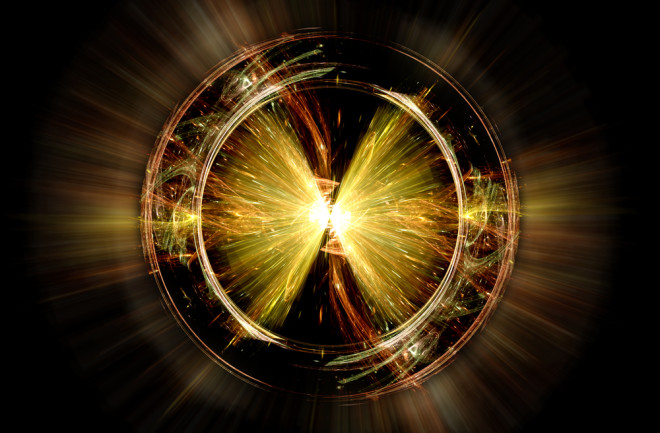 Every single particle fits into one of just three classes, or kingdoms: bosons, fermions and anyons, the latter just discovered in the past year. You can think of these groups as akin to the taxonomic tiers of organic life, each as different from the others as plants are from animals and bacteria.

All of observable reality arises from this trio of building blocks and their peculiarities — the standoffish fermions, the gregarious bosons and the eccentric anyons come with enormous implications for the ordering of the cosmos, and for human technology. But just how do these basic ingredients produce the stunning diversity of substance and phenomenon we see around us, not to mention the exotic behavior most of us never see?

For centuries scientists were puzzled by an apparent dualism in nature, between matter and light. In the early 20th century, quantum mechanics finally consolidated the two realms by showing that both an electron and a photon are subject to the same mathematical equations. Under certain circumstances, each can behave like either a particle or a light wave.

“It was a great advance to realize that different kinds of particles … actually have a unified description,” says Frank Wilczek, a Nobel prize-winning physicist at the Massachusetts Institute of Technology. But this unification applies only to individual particles — as soon as you let two or more of them mingle, their collective conduct reveals a different subatomic division, between bosons and fermions.

Bosons — named for Indian physicist Satyendra Nath Bose — are the conformists of the particle world, and photons their poster child. Technically speaking, they “show an enhanced probability to be in the same quantum state,” Wilczek says. “More colloquially,” he adds, “you might say they like to do the same thing.” Think of a laser beam: It’s made of countless photons all moving in the same direction, exhibiting the same color. They cooperate, in a sense.

Fermions — named for Italian physicist Enrico Fermi — on the other hand, are antisocial. They refuse to occupy the same quantum state, or, to extend the analogy, they don’t like to do the same thing. This is the essence of the Pauli exclusion principle, which finds its epitome in electrons. Because no two can exist in the same state, they are forced into the various shells around their atoms. This restricted arrangement produces all the elements in the periodic table, along with their dazzling chemical properties.

In fact, this repulsion is the reason atoms don’t collapse, the reason matter is hard. Each time we take a step, it prevents us falling through the Earth. Similarly, at the macroscopic level, it’s what keeps white dwarves — the burnt-out, shrunken cores of stars like our sun — from crashing in on themselves. This inherent resistance of electrons “plays a very important role in the universe, both at the atomic scale and in these astrophysical contexts,” Wilczek says. Without it, everything would rapidly devolve into “a structureless goo.”

Fermions are generally thought of as particles of matter: the quarks, which combine to form protons and neutrons; and the leptons, which include electrons, the lesser-known muons and taus, and the nearly massless neutrinos, which only rarely interact with other matter.

Bosons, on the other hand, are the “force-carrying” particles: the photons, the gluons, and the Z and W bosons. Fermions exchange these between each other to generate, respectively, the electromagnetic, strong and weak forces. (There is presumably a graviton for gravitation, but it has yet to be detected). Lastly, the Higgs boson does not represent a force, per se, but it is what imbues the fermions with mass.

But the above distinction — between matter and force — is a bit of an oversimplification. Under certain circumstances, fermions can even become bosons (this is how superfluids form). The crucial difference between the two is actually their spin, or angular momentum. Bosons all have an integer spin, of 0, 1 or 2, while fermions have half-integer spins, like 1/2 or 3/2.

Until recently, bosons and fermions were the only proven classes of particle, both inhabiting the three-dimensional space we know and love. But mathematically, there was always another possibility: particles confined to two dimensions.  They’re called anyons, and strictly speaking they are quasiparticles, or emergent particles — excitations that emerge from the activity of other particles in a material. You’ll never find them outside the material, on their own. They don’t fit the mould of electrons and photons.

“But what is a particle, after all?” Wilczek muses. “It’s a concentration of energy that has a certain integrity to it, that can move around, that has reproducible properties,” and anyons meet those criteria as well as any other particle. “They are how energy organizes itself into units. If you lived inside the material and didn’t know any better, you would call them particles.” It’s hardly stranger than to call an atom or proton by that name, since both are composed of more elementary units.

Though the existence of anyons wasn’t confirmed until last year, Wilczek and his colleagues predicted it in the 1980s. He named them as a cheeky reference to the fact that, when it comes to these bizarre denizens of the quantum world, “anything goes.” They neither fall in line nor avoid each other completely, like particles in the other kingdoms.

In technical terms, this is because of their respective wave functions, the mathematical formulas used to describe a particle’s quantum state. When two bosons loop around each other, their initial and final wave functions are identical — nothing has changed. Repeating the exercise with fermions, the wave functions will be off by a factor of -1. With anyons, Wilczek says, “You can get, roughly speaking, anything.” The behavior of particles in the traditional kingdoms is rigid by comparison. “Whereas bosons and fermions are just one thing, in a sense,” Wilczek says, “anyons is a much bigger family, conceptually.”

The discovery of anyons “opens whole new worlds of particle phenomena,” he adds, and scientists have been exploring uses for them since long before anyone was sure they existed. Most importantly for practical purposes, they have a kind of memory.

To understand this, you first need to understand “world lines,” the trajectories particles follow through space and time. They can become entangled as anyons move around each other, shifting the wave function of the particles involved and recording their movements all the while. Physicists liken the process to braiding hair. Counterintuitively, it becomes more complex in low dimensions, where it’s more difficult to unravel the world lines. In three dimensions it’s easier, and in four there’s no such thing as a knot.

The “memory” of an anyon isn’t the same as ours, of course, but at an abstract level it might as well be. “It’s an encoding of what happened in the past that persists into the future,” Wilczek says. Probably the most promising use for this property is in quantum computing, where qubits of information would be represented by the movements of anyons, like ones and zeros in a computer chip. Experts believe this could prove a more stable platform for what are today quite fragile computers, often crippled by minor disturbances from the outside environment. Microsoft in particular has spent years trying to harness this technology.

You’ll never come across anyons in your everyday life. Unlike the bosons and fermions that make up everything familiar to us, their exotic cousins come to be only in two-dimensional materials cooled to near absolute zero and subjected to strong magnetic fields. “It’s not something you stumble into walking down the street,” Wilczek says. It is, however, “a great playground for quantum mechanics.”