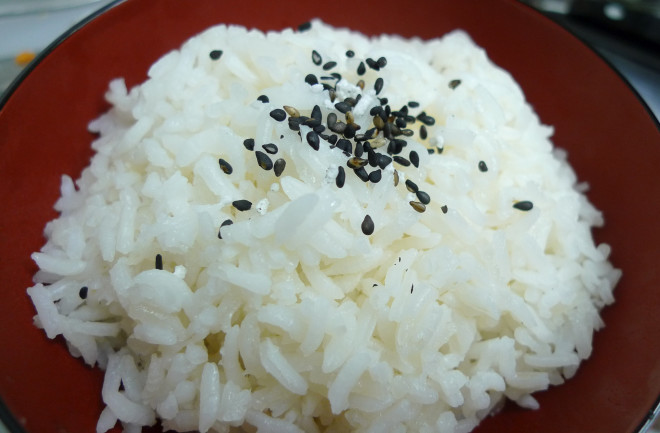 Black sesame seeds: more than just a tasty garnish on rice. Photo credit: Arnold Gatilao (arndog/Flickr) Heavy metals, such as cadmium, lead, and mercury, leach into our food supply through the air and water; these undesirable additives come from industrial processes such as mining, smelting, battery manufacture, electroplating, and pesticide production. Cadmium and lead are the chief contaminants of rice, wheat, and foods containing these cereals [1]. Mercury is often found in seafood, but cadmium and lead can also be present in smaller amounts [2]. Even trace amounts of these heavy metals can be extremely toxic to human health, since they have extremely long biological half-lives, or time required for half the absorbed metals to leave the body: 10 years for cadmium [3], 30 days for lead [4], and 60 days for mercury [5]. Thus, there is an increased risk of chronic poisoning due to heavy metal accumulation in tissues and organs, which can lead to impairment of the immune and central nervous system [6]. Current protective measures against dietary exposure to heavy metals involve chelating agents, which are compounds that can bind to metal ions. Chelating agents include cereal fibers from wheat, rice, and oat bran, as well as polyglutamic acid, which is the main constituent of nattō, Japanese fermented soybeans [7]. Although edible, the efficacy of these particular chelating agents has so far only been evaluated for removing heavy metals from water and soil. What about the heavy metals we’ve already ingested? In a collaboration among researchers in Italy and Austria, ground black sesame seeds (Sesamum indicum L.) were shown to effectively bind to cadmium, lead, and mercury under simulated physiological conditions. A major challenge in using chelating agents is that they also bind to many essential ions in the body, such as calcium (Ca^2+), zinc (Zn^2+), and iron (Fe^2+); this can result in deficiencies, which can have negative health effects. Unlike other chelating agents used for heavy metal detoxification, which cannot differentiate between essential metal ions and toxic heavy metal ions (cadmium (Cd^2+), lead (Pb^2+), and mercury (Hg^2+)), black sesame seeds exhibited selectivity towards the heavy metals. In mixtures that contain heavy metals plus essential metal ions, the ground black sesame seeds bound to far more heavy metals than essential metals. Interestingly, low levels of iron increased the amount of cadmium and lead bound to the sesame seeds. While other chelating agents, such as thiamine and becozinc, risk deficiencies in essential metals [8], the preference of black sesame seeds to bind to toxic heavy metals make it a favorable dietary supplement for heavy metal detoxification. The ability of black sesame seeds to bind to toxic heavy metals may be attributed to lignans, a type of phytochemical commonly found in plants and a major component of sesame seeds. To determine how the heavy metals were binding to the ground black sesame seeds, the study compared the binding abilities of ground black sesame seeds against model phytochemicals, caffeic acid, ferulic acid, and coniferyl acid, which represented sesame seed lignans after digestion in the stomach. Of the three model pigments, caffeic acid was observed to remove the most heavy metals, suggesting that digested sesame seed lignans may have a similar chemical structure to caffeic acid.

Lignans in black sesame seeds are responsible for heavy metal binding. Left: Model pigments representing digested lignans were compared to ground black sesame seeds (BSP) for heavy metal removal. Right: Caffeic acid and the suggested binding sites for cadmum (Cd^2+), lead (Pb^2+), and mercury (Hg^2+) There are additional benefits to lignans in sesame seeds! As a major category of phytoestrogens, lignans are known to be effective antioxidants. Moreover, sesame seeds specifically contain the lignans, sesamin and sesamolin, which studies have shown to also contain pharmacological benefits such as antihypertensive, anti-inflammatory, and anticarcinogenic properties [9]. For those worried about chronic dietary exposure to heavy metals, prevention may be as tasty as black sesame seeds sprinkled on sushi rolls.