The new Blue Moon lander can deliver up to 6.5 tons of cargo ⁠— and possibly crew — to the lunar surface. 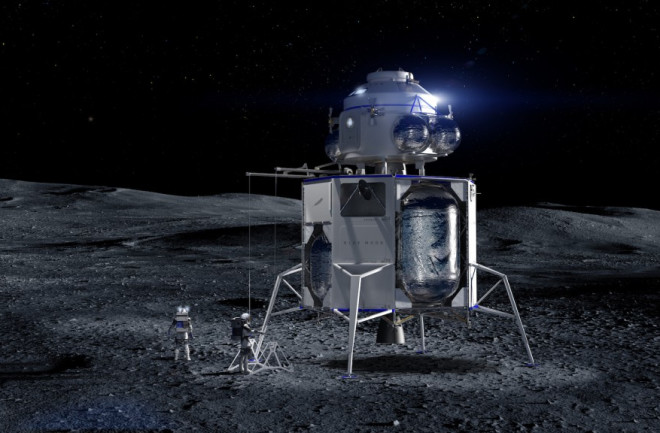 The Blue Moon lander would be capable of carrying cargo and astronauts to the Moon's surface. (Credit: Blue Origin)

On Thursday, Blue Origin founder and Amazon owner Jeff Bezos unveiled the Blue Moon lander, a spacecraft that can deliver up to 6.5 tons of cargo ⁠— and possibly crew — to the lunar surface. The announcement was made at a news conference in Washington, D.C.

Along with Blue Moon, he revealed his new BE-7 rocket for the lander, which he says has been in development for three years. If all goes according to plan, the company will test fire the rocket for the first time this summer. Together, Bezos sees these developments as a way to return humans to the moon’s surface, “this time to stay.”

The White House has vowed to do exactly that, returning humans to the lunar surface by 2024, and Bezos says his lander is one way to accomplish that goal. It's a bold claim for a spacecraft company that's only reached the edge of space — and never fully orbited. But the company says it's poised to make spaceflight history.

Blue Origin’s more familiar spacecraft, the New Shepherd, is designed to take humans on suborbital flights. Bezos had previously announced a crewed launch on the rocket in 2019, and on Thursday, he re-committed to doing so this summer.

While New Shepherd has been undergoing tests for years, it would be an impressive feat in light of SpaceX and Boeing’s recent claims and setbacks. However, SpaceX and Boeing have successfully flown cargo to the International Space Station multiple times, while Blue Origin isn't scheduled to make it to Earth orbit until 2021.

That's when they plan to launch the New Glenn, a two-stage rocket with a reusable first-stage. Eventually, this craft could carry both crew and cargo — lots of it — into space. But that first flight is still a few years off.

To take humans even farther, Bezos discussed a version of the Blue Moon Lander that could carry a crew capsule. Bezos also shared his full, longterm vision of space and lunar exploration during today’s event, including O’Neill cylinders, an idea long-beloved by space settlement enthusiasts. These would be self-sustaining space stations complete with gravity, thanks to the effects of rotation.

If this year sees both a test fire of the new BE-7 and a successful crewed flight of New Shepherd, then Blue Origin will be well on its way to take the next very large step in human spaceflight.