Beyond Mars: The Distant Future of Space Exploration 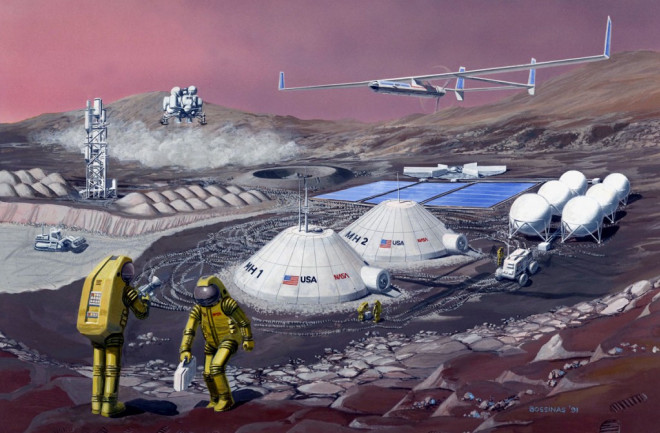 An artist's rendering of a multifunction Mars base. (Credit: NASA/Glenn Research Center) Louis Friedman has always balanced his optimistic vision for the future of human space exploration with a dose of reality, and his tempered outlook courses through his new book,

Human Spaceflight From Mars to the Stars,

in which he charts the distant future of human space travel. Friedman is optimistic that human space exploration will continue well into the future. However, here’s that dose of reality from Friedman: humans will never venture beyond Mars, at least not in any historically significant way. Once humans tame Mars, how will humanity continue to explore cosmic frontiers, and to what end? Space travel, according to Friedman, will be an act more focused on transporting our minds — with the help of new technologies — rather than our bodies. Friedman is the executive director emeritus of The Planetary Society, which he co-founded with Carl Sagan and Bruce Murray in 1980. He has a knack for bringing space researchers from multiple nations together on ambitious projects. He played a role in the Mariner-Venus-Mercury project, the Voyager missions, the Venus Orbital Imaging Radar (Magellan), the Halley Comet Rendezvous, Mars exploration, and has brought the idea of solar sailing from a dream to actual testing in space. Discover contributor David Warmflash spoke with Friedman about his book, space colonies and the future of space exploration.

Louis Friedman (Credit: Planetary Society)Discover: What is the central message of the book?Louis Friedman: Human space exploration will continue well into the future. It will be exciting, focused on exploration and settlement of Mars. But humans themselves will never travel beyond Mars. Can we talk a little about why Mars should be a location for humanity’s second home? For humans, we know there’s an emotional attachment to Mars, but from a pragmatic standpoint, is there anything that makes it better than free space colonies (structures either in the Earth-moon system, or in their own orbit around the sun)? Or do you see a future in which we have Mars colonies, free space colonies, and maybe cities on the moon and other bodies?LF: What you describe is not impossible, but to me it makes little sense. The space colonies you imagine are vast engineering projects much bigger than the enterprise of adapting ourselves to the surface of Mars. They would have to be built with material brought from Earth at much pain at much cost. On Mars, we would protect ourselves from radiation with Martian materials — the dirt of the planet. A 1-g space colony for thousands of people would be huge: impractical to build, and more impractical to supply. The space colony ideas of science-fiction are largely discredited for human’s real future now. They certainly do not appear in any space agency or private space plan. Do you anticipate that we’ll terraform Mars?LF: Yes. Of course I don’t know exactly how or when, but I see it as part of human evolution to eventually adapt to living on Mars and then to make it better and better. And, I must note, we are already terraforming Earth – so we know it is something we are capable of. That said, I must also emphasize that I think that will happen, I don’t know it. We have not settled underwater in the oceans, nor have we settled even in the Antarctic. They are much easier to reach and have many more resources than Mars. I am not sure of their future even here on Earth. But I am an optimist and I think Mars represents an unlimited future for human endeavor.

Painter Rick Guidice's mid-1970s vision of what an orbiting space colony might look like. The cylinders sport halos of agriculture pods. However, Friedman says elaborate colonies like these probably aren't in the cards for humans. Check out more retro space colony art in this Discover gallery. (Credit: NASA/Rick Guidice)

When you say that humans will never travel beyond Mars, do you mean not to colonize other worlds, or do you mean not even for a quick visit? Wouldn’t a human mission to the outer solar system be a lot easier than sending the first astronauts to the moon was during the 1960s when we had no human space flight experience and had to create everything from scratch?

LF: Human exploration and colonization of Mars will keep us busy for hundreds, even thousands, of years. During that time, there will be advances in nanotechnology, space sailing, robotics, biomolecular engineering, and artificial intelligence. These advances are occurring even now, affecting our outlook about what it means to be human and engage in human activity. Those technologies will not merely allow us to stay home on Earth and Mars, but our minds will extend our presence throughout the universe so that we will not need or want to extend our bodies there – even if we could, which I think is doubtful. So are you saying that sending humans, say, to an interesting moon of Saturn, like Titan or Enceladus, would be pointless, since we could get the full experience from our machines, through something like virtual reality, or even uploading data from deep space missions into our brains, so it will really seem as though we went in person?LF: Yes, that’s right. I think we’ll be doing that before the end of this century, whereas if we had to wait for human life support on Titan, it would be many, many centuries.

Even so, do you think that will be enough for everybody? Wouldn’t some daredevil take a human mission to points beyond at some point, just to show that they could do it? Is it so unrealistic to think that China,

India, Brazil, Russia, the United States, the United Nations, or for that matter a government that has yet to exist on Mars, could find itself in a new space race where the goal is to get people — live people — where no one has gone before, for that prestige factor?Wanting to do these things just seems to be part of human nature, we always produce people who want to visit new places, even if there’s no logical reason, don’t you agree? Do you think artificial intelligence and othe

r technologies will change something about us, so that nobody will ever take a distant, dangerous space voyage that has no practical value?

LF: You have raised several questions here. You are right about the possibility that if we can do something, someone might just want to. We have all kinds of extreme sports here on Earth. I don’t rule out some daredevils or tourist extremists from our Earth-Mars home trying a daring mission to the asteroid belt or Ganymede. But it won’t be very relevant or even as much a part of our Society as those extreme trips to Mt. Everest. Somebody jumped out of a balloon from the edge of space a year or so again, interesting, but not relevant to human development. Humans will already feel present on Ganymede (and lots of other places) and the development of human life support to engage in those extreme efforts will be expensive and pointless – if even possible…I think NASA has it right now. Their Journey to Mars puts into context why we have human spaceflight. In my opinion, there is no other purpose to human spaceflight.

You know how some insightful people like Stephen Hawking, Elon Musk, and Bill Gates have warned that we should be careful about artificial intelligence, about how we develop it and how we let it evolve. In researching and writing the book, did you develop any concerns along these lines? Do you think that eventually, machines might replace humans entirely?LF: I don’t go that far; perhaps I just don’t have their insight or enough imagination. I think their warnings are right on – the technology might be dangerous and misused. We should be careful, but it would be impossible to ban it. Similarly, I don’t subscribe to Ray Kurzweil’s singularity theory — that humans will evolve into their electronics. It is Mars that will save us from that gloomy idea. It is a world for unlimited human development and evolution. You might ask what about in 10,000 years; won’t we have to confront our limits there? My vision isn’t so great – ask me in 5,000 years and I’ll give you a better answer. Look where we were on Earth 10,000 years ago and imagine a discussion of inhabitants then predicting their evolution. You describe yourself as wanting to make space exploration missions happen. What missions are you trying to make happen now?LF: There are two I am working on now – both addressed in the book. The first, of highest priority is the Asteroid Redirect Mission – a very clever and innovative idea to grab a large piece of an asteroid and move it to a place where our astronauts can reach. It will restore science and adventure to the human space program and be the first milestone for human space flight beyond the moon on the way to Mars. NASA is preparing to do this within the decade and to make it a literal stepping stone on the journey to Mars. The second is at the other end of the scale: a small robotic mission to go deep into the interstellar medium to the focal line caused by the sun’s bending of light from an extra-solar planet. In theory, the solar gravity lens focus can magnify the planet by a billion times – making a 10-centimeter telescope there equivalent to an 80-kilometer telescope here. It may be the only way to obtain high-resolution images of a potentially habitable world in our lifetime. These two missions illustrate the point of my book nicely: human space flight nearby, robotic spacecraft far away, extending the human presence together.