Beneath the Moon's Two Faces

Earth is the reason the moon has two distinct sides. 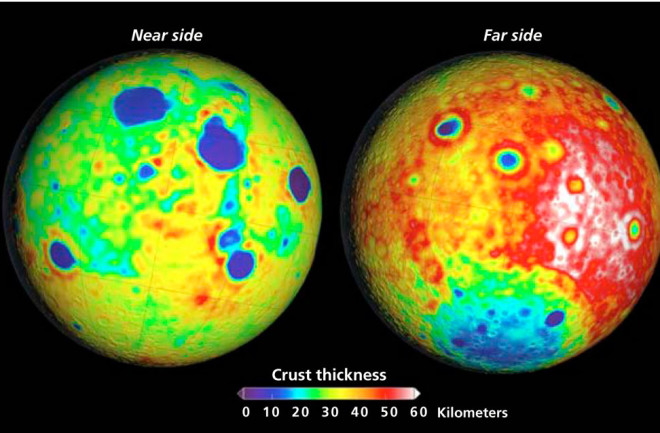 Earthly heat may be to blame for the thicker crust on the moon’s far side. | Ernie Wright (USRA)/Goddard Space Flight Center Scientific Visualization Studio

Astronomers have finally figured out why the moon is so two-faced, and it turns out the answer was with us all along: It’s Earth’s fault.

The moon’s two faces look nothing alike. The far side has significantly fewer of the familiar dark patches, formed by ancient lava flows. That’s because the lunar crust is thicker there, making it harder for asteroid impacts to break through and release magma. But why was the crust thicker to begin with?

A team of Pennsylvania State University astronomers came up with a likely answer last summer, one that dates back to the moon’s formation. When a Mars-size body collided with the young Earth some 4.5 billion years ago, the material that shot into orbit eventually coalesced and cooled into the solid moon, with one side always facing Earth. But the crash also heated our planet to over 7,000 degrees Celsius (13,000 degrees Fahrenheit), energy that irradiated the moon’s near side, keeping it molten much longer.

The far side, on the other hand, cooled sooner, making conditions more favorable for material to condense there. That material became lunar rock, resulting in a thicker crust on that hemisphere.

A similar process can probably occur on extrasolar planets that are heated to lopsidedness by their host stars, so at least the moon isn’t the only one with two faces.