Behold! The First Zinnia to Bloom in Space 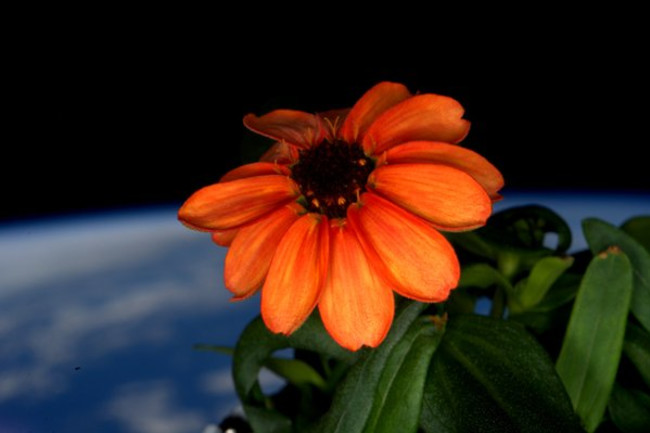 An orange zinnia bloomed in zero gravity. (Credit: NASA/Scott Kelly) For people on solid ground back in the United States, spring is nothing more than pinprick of light at the end of a long, cold tunnel we call winter. But aboard the International Space Station, by all appearances, spring has sprung. Marathon U.S. astronaut Scott Kelly over the weekend tweeted images of the first flower to grow from a seed and subsequently bloom in space. The 13-petaled orange zinnia brought a little color to the otherwise aesthetically sterile surroundings on the ISS, and it was the first flower to show its glory in zero gravity. That’s one small step for Heliantheae, one giant leap for Plantae.

The path to orange splendor on the ISS wasn’t easy, and that’s what NASA scientists wanted. In May 2014, the Veggie plant growth facility was installed on the ISS, and crew members planted red romaine lettuce as the initial crop. The first crop wasn't very successful, due to drought and stress. But the second crop — benefiting from insights gleaned from the first — yielded an edible harvest that crew members dined on. 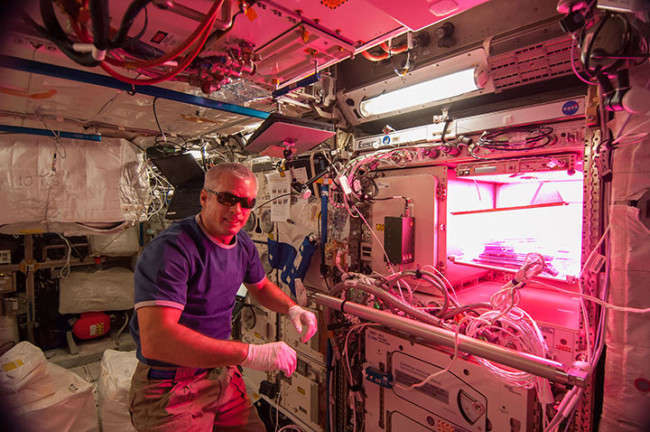 NASA astronaut Steve Swanson of Expedition 39 activated the red, blue and green LED lights of the Veggie plant growth system on May 7, 2014. (Credit: NASA) The zinnia plant was the next crop on the docket for the Veggie lab, and these plants were chosen for the valuable lessons they could teach scientists. Zinnias are more sensitive to “environmental parameters and light characteristics” and take longer to grow. Therefore, zinnias posed a more difficult challenge for microgravity farmers on the ISS, and every daunting challenge is an opportunity to learn valuable lessons. The zinnias didn’t get off to a good start. Just over two weeks into their growth period, the plants showed signs that they were waterlogged. Scientists planned to turn the Veggie labs’ fans on high to reduce moisture levels, but an unplanned mid-December spacewalk forced them to postpone this fix. In late December, the leaves started dying and became hosts for mold. The plant situation wasn't promising, as you can see in a Tweet from Kelly:

Our plants aren't looking too good. Would be a problem on Mars. I'm going to have to channel my inner Mark Watney. pic.twitter.com/m30bwCKA3w

Kelly actually took over the horticultural duties on the ISS and helped lead a dramatic comeback. He cut away the dead foliage and sanitized the plants to control the mold. Sure, some plants died along the way, but two survived and thrived. On Saturday, one of the zinnias made its world premiere. It had bloomed and provided the Hollywood ending to this comeback story.

Yes, there are other life forms in space! #SpaceFlower#YearInSpacepic.twitter.com/BJFWvQXmBB — Scott Kelly (@StationCDRKelly) January 16, 2016

Lessons learned from the rollercoaster ride with the zinnias are key to fulfilling the long-range goals of, say, colonizing Mars or other deep-space missions. To make these missions feasible, we’ll need to know how to grow food in space, and adapt our green thumbs to meet the challenges posed by this environment. Scientists will study the zinnias that perished, and continue to monitor the ones that are thriving. The next agricultural challenge for the ISS crew will be to grow vegetables in space. The tomato seeds for that endeavor will arrive in 2018. In the meantime, the brilliant orange zinnia will provide colorful morale boast for the ISS crew.