Sometimes I'm surprised by something I thought I knew, and found out I didn't, not really. For your consideration: NGC 1427A, a dwarf galaxy. 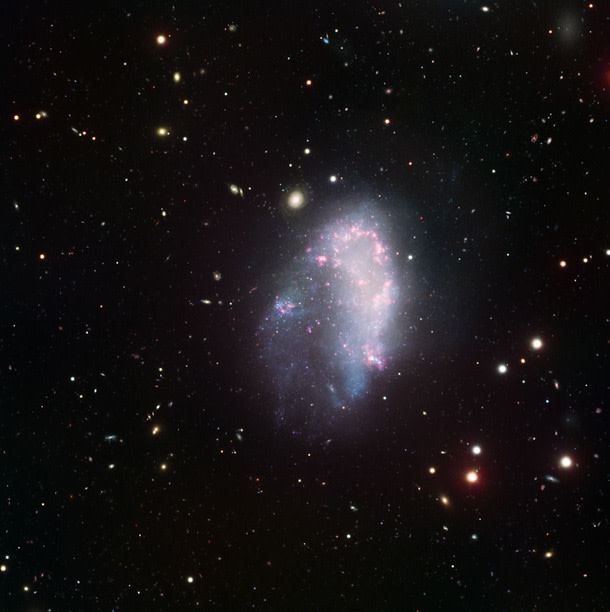 [Click to unendwarfenate.] I've seen pictures of this little guy before. It's a small galaxy, maybe 20,000 light years across (the Milky Way is 5 times that size), and part of the Fornax cluster, a small but rich cluster of galaxies about 60 million light years away. The picture here was taken with the monster 8.2 meter Very Large Telescope in Chile, and uses filters that give a somewhat true-color appearance, though it also accentuates warm hydrogen (the pinkish glow). Even though I've looked at it before, I don't think I really saw it, because the boomerang shape is obvious, and to anyone familiar with galaxy dynamics the reason behind it is obvious too. Maybe it'll help to know that this diminutive galaxy is screaming through the Fornax cluster at 600 kilometers per second, a ridiculously high speed. See it now? NGC 1427A looks like it's got a swept-back shape because it's being swept back. In between galaxies there is an ethereally-thin fog of gas, but there's enough there to have an effect on a passing galaxy. The boomerang shape of the galaxy is because that side is facing into the wind, so to speak, and being compressed. The pink curve in the image is due to rigorous star-formation going on there, where the gas clouds are collapsing from the pressure and birthing stars at a prodigious rate. Looking at this image, it's so obvious what's going on I'm surprised I didn't notice it before. I guess sometimes you miss stuff right under your nose if you're not paying attention. If you consider 60 mega-light-years under your nose.

Tip o' the Strömgren sphere to the ESO. Image credit: ESO. 10 extra BA points for anyone who knows what the title's from. Don't Google it! That's cheating.