In "Greenland," the space-impact disaster movie gets a makeover in response to new science and new social realities. 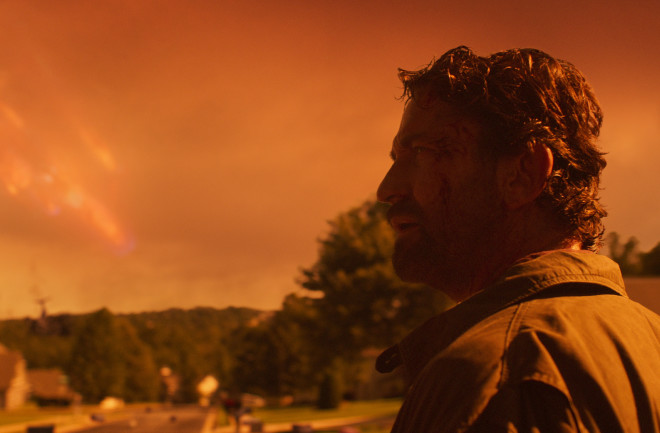 The advance of science tends to deal cruelly with science-fiction stories anchored to older perspectives on the universe. Try watching episodes of the original Twilight Zone from the late 1950s and early 1960s and you'll see what I mean. Back then, Rod Serling could set his allegorical stories on nearby Earth-like asteroids without triggering too much cognitive dissonance among his viewers. Look at those episodes now, after space probes have viewed a dozen asteroids up close (with many more missions on the way), and their plots have a musty, fairy-tale quality.

Cosmic-disaster movies have not fared much better. When Worlds Collide, from 1951, is today remembered as a showcase of kitsch, to the extent that it is remembered at all. Meteor, a would-be 1979 blockbuster starring Sean Connery (RIP), hasn't fared much better. The 1998 Armageddon — in which a bunch of oil-rig drillers set out to save Earth from a strangely glowing, almost biomorphic killer asteroid — lives on mostly as a hate-watch favorite. So I was both skeptical and curious when I got a chance to preview Greenland, a movie opening today about the impact of an interstellar comet, starring Gerard Butler (above) and directed by Ric Roman Waugh.

The movies succeeds by adopting a less-is-more approach, which allows more room for both realistic science and realistic drama. The object from space doesn't seem hellbent in targeting international tourist attractions: No well-aimed fragment strategically takes out the Eiffel Tower or the Statue of Liberty. Making the object an interstellar comet also offers at least a fig-leaf of plausibility about why scientists have so little advance warning that the object is incoming, and so much difficulty predicting its exact path. (Earth may in fact have been hit by small interstellar meteors in the recent past.) There is a refreshing lack of techno-babble about nonsensical save-the-world schemes. And the film's focus on the mounting dread of those trying to survive feels true to our pandemic-informed moment.

Visually, Greenland still has to make its concessions to storytelling. Most notably, in a couple key scenes, comet fragments land like hailstorms of fireballs. I asked Marc Massicotte, the visual-effects director, about those moments. "It probably wouldn't be as many, and the way it would hit cars and people and how the results of those would be very different," he freely confessed. "This was creative license to keep things interesting and dynamic." Perhaps the biggest scientific advance is the way the movie depicts the human reaction, which for once seems recognizably, well, human.

I spoke with director Ric Roman Waugh about how he created Greenland, how he found his balance between science and cinema, and what it was like creating a disaster movie in the middle of the COVID-19 pandemic. An edited version of our conversation follows.

The real deal: Comet Borisov, an interstellar visitor imaged by the Hubble Space Telescope in 2019 as it passed in front of a distant spiral galaxy. (Credit: NASA/ESA/D. Jewitt-UCLA)

There have been many impact-disaster movies before. How did you approach Greenland to do something new?

It’s always about the different way into familiar territory for me. Hopefully I did that with my prison movies and the Fallen franchise. When I read this [screenplay], I had been really looking for a thriller—a disaster, horror, survival, story in this vein. When I read the material, it reminded me of Children of Men. It reminded me of War of the Worlds. It reminded me of the way that the Tom Cruise character in War of the Worlds and his two kids defined the point of view of the world at stake. It never deviated from that, so you got an emotional attachment.

What I loved about Greenland is that it's really this love story of a family trying to atone, trying to come back together, a million miles apart. It felt very much thematically about what's going on in the world today, with the divisive state of things that we're in. They think they have all the time in the world to fix their marriage and refine their love. And then it's taken away. If you've got that kind of intimate portrayal in this, then this big visceral ride that we get to take becomes the icing on the cake. It gives the action an internal point of view, where you're watching everything from the inside, versus just watching CGI [special effects] blowing things up.

Still, I’ll admit I was dubious about watching a comet-disaster movie, until I saw what you did to escape the clichés.

I understand your reservations. They were my reservations while reading the material. I had read a lot of scripts in this genre that felt like, I'm just seeing the same formula over and over and over. What got me with this movie is, in the first 20 minutes, the monster is the marriage—the tension of coming to terms with what happened to them. Comet Clarke is this just going to be this beautiful thing passing by the Earth. Then the story completely flips on its head. I love that narrative engine.

I appreciated the little things you did to update the science as well – for instance, the plausible-looking telescopic images of Comet Clark. How much did scientific realism drive your plot?

We weren't looking to fool somebody like Neil deGrasse Tyson and tell him, "This is the exact way things go!” I think there is a responsibility to make a form of cinema that is entertaining and provocative and big. But also, I am all about authenticity and logic, making sense. It’s a balance. There are times you can overdo the logic of something, versus giving it enough room to get you a suspension of belief.

What about making Clark interstellar comet, in particular? That’s an unexpectedly specific detail.

We did extensive research, not only on interstellar comets. When we did, we learned — oh, God, how cool is this? — that a lot of them break up into fragments over millions of years. So, now I can have a [comet] monster beat the crap out of everybody for two hours, versus waiting for the big one [single impact]. You find authenticity that can guide you in your creative approach. We also did a lot of research about how the [dinosaur] extinction really went down. Ejecta and molten rain, and how the Earth caught fire, and how big was the rock that hit the Earth?

There are pretty good theories, but it's still somebody's opinion of it, right? We tried to tap into the general opinion of how things went, and then use that as an engine for what we build [in the movie].

You need to delve into all the darkness and the light. It’s bittersweet. The look of the Sun when it comes up the day after the first big night of fragment impacts [in Greenland]: The world is orange, and that was based on watching the bushfires that were happening in Australia. Watching that, we tried to make [the scenes] feel as authentic as possible, and wondered if we’d gone too far. Then, unfortunately, came the fires on in the West Coast, and we were like, "We could have gone five times further and it would have been factual."

Fragments of Comet Clark make a dramatic, if somewhat fanciful, entrance in this scene from "Greenland." (Credit: STXfilms)

Much of Greenland is about the ways that people react in the face of disaster. There’s a lot of science and a lot of history to draw on there. Where did you go for your inspiration?

When I did the movie Felon, it was a big eye-opener for me. I became a volunteer parole agent in the state of California, to go undercover into the penal system and really understand it. I wanted to see it for myself and not fall into stereotypes and clichés. That became a two-year odyssey. I found a society of moral gray. I saw how far people will push their own morality for their survival, but also the beauty and the humanity that you wouldn't expect.

You have an actor like Nikolaj Coster-Waldau. I took him into the prison system, and he's talking to an individual [inmate]. Then 10 minutes later, after he can't believe how beautiful and articulate this man is, we learn the guy just found out the day before that he's got 37 more years in prison. And yet he's talking to us in this human way. That has resonated with me through all of the stories that I tell.

You think a space disaster would similarly bring out humanity’s moral extremes?

To me, Greenland was a really interesting way to capture all of those different forms of morality. You can think, yeah, prison forces people to act that way. Life-or-death forces people to act that way. We are seeing it right now firsthand, with the pandemic, the racial injustice going on, the divisiveness of our politics. It's getting ugly, and you're seeing humanity being tested without prison walls and without a comet — without anything.

That to me is always the real thing that I'm after. You want a motivator, like a comet or a prison or a pandemic. But what happens within that motivator? How do people react? The true monster to me was never going to be about the comet hitting people, it was how it was making people behave. Would it make them be capable of doing heinous things, or would they act selfless and help each other and help one another?

What did it feel like releasing a disaster movie in the middle of a pandemic? Did you worry that nobody would want to see this kind of story?

Well, maybe misery loves company, and we can forget the real disaster we're in and go have fun at the theaters and go see a big form of entertainment. But there's a message within Greenland where I hopefully see the light at the end of the tunnel of all the issues that we're dealing with and the catastrophes that we're dealing with right now. There is hope and there is love in the world. It’s a message that we will prevail.

You also had the pragmatic challenge that you were in the middle of production when COVID-19 hit. How did you manage?

This movie, in March, was on a mix stage with hundreds of visual effects shots left, the score not finished, the mix not finished, the online not finished, and we got shut down when California got shut down. Instead of everybody shutting their doors and going home, everybody took their computers, took everything they possibly could, and 300 people worked over four months remotely from their couches and their bedrooms to finish this movie.

Nobody buckled, all the way down to the last people in this crew and our producers. Everybody went through and made this happen. We have become so media-driven, showing all the heinous things [in the world]. I wish there was a little bit more of a blend, showing the humanity and the things that people are doing to help one another. Look at our first responder community, the people that are doing everything right in terms of helping us and keeping us alive. I love that we're starting to see a grassroots movement of people saying, "We need to start healing this country and healing our world."