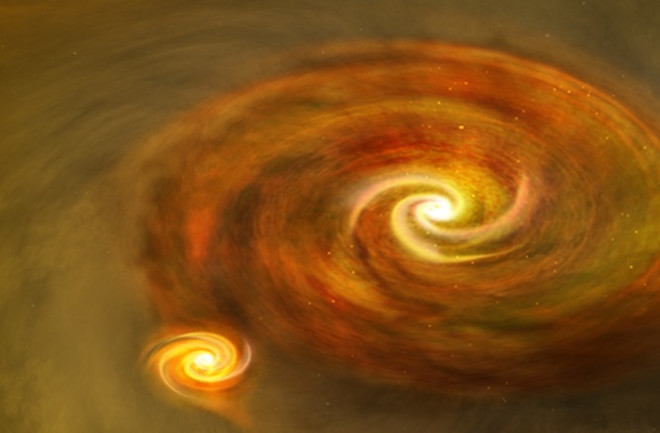 Binary stars often form in pairs from the same initial cloud of dust and gas. (Credit: B. Saxton, NRAO/AUI/NSF)

Researchers have found two massive young stars nestled closer together than anything astronomers have seen so far. By studying PDS 27 and its companion, located about 8,000 light-years from Earth, astronomers hope to learn more about how stars like this form and evolve.

Something like half the stars in our galaxy orbit in pairs, triplets or even quadruple star systems. And scientists suspect that nearly all of them may form in multiples before splitting apart as they age. This is because stars form in groups, with the massive clouds of dust and gas that give birth to stars – stellar nebulae – forming thousands of stars in brief periods. Often these stars are born close enough to orbit one another, and that’s why stellar twins and triplets are quite common in the universe. High-mass stars in particular, like PDS 27, are almost always born with companions.

But even these sibling stars often orbit something like 1,000 astronomical units (AU; one AU is the average Earth-sun distance) from each other. This is farther than all the planets in our solar system, and somewhere near the inner edge of the Oort Cloud of comets that surrounds us. Mature stars sometimes spiral in to extremely close distances, close enough to steal material from one another.

But scientists have never seen two young stars like PDS 27 and its companion, which orbit only 30 AU from each other, about the distance between the sun and Neptune. Researchers, who published their findings March 11 in Astronomy & Astrophysics, used the European Southern Observatory’s Very Large Telescope Interferometer to spot the pair.

Part of the rarity of such a system is that massive stars like PDS 27 don’t live very long – only a few tens of millions of years, compared to the roughly 10-billion year life expectancy of the sun. Stars more than ten times the mass of the sun also evolve differently than medium- or small-mass stars. So catching sight of such massive stars at a young age can teach astronomers a lot about these objects. Astronomers want to know how the presence of the companion affects the star’s evolution.