Astronomers Spot a Supernova in the Making 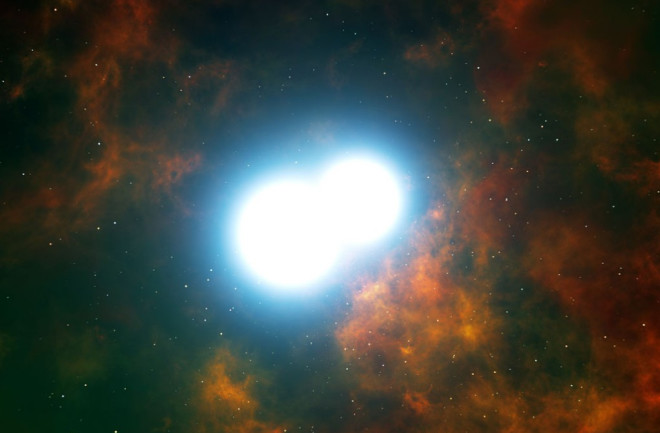 Artist’s impression of two white dwarf stars destined to merge and create a Type Ia supernova. Credit: ESO/L. Calçada Astronomers can see into the future of the two superdense stars racing around the center of planetary nebula Henize 2-428. And it doesn’t look good. Their racetrack is slowly (but steadily) shrinking. And in 700 million years, they will crash into each other, igniting a Type Ia supernova. In over a century of astronomers studying supernovae, this is the first time they’ve seen this type of supernova in the making.

Life of a White Dwarf

Type Ia supernovae are the game-over of some normal-sized stars, which spend most of their days fusing hydrogen into helium. As they age, they begin turning that lifetime’s supply of helium into carbon and oxygen. But they don’t have enough energy to concoct something new, and so their carbon and oxygen build up into a hot, dense core. In a death-rattle, the stars blow off their outer hydrogen and helium layers. The exhaled gas forms pretty planetary nebulae. But the stars themselves — now called white dwarfs — just cool off, growing dimmer like a recently switched-off electric oven coil. Sometimes, though, they get a jolt — some extra mass that ignites a reaction that ends in a supernova. Astronomers have spent years trying to figure out where that mass comes from. For a long time, it seemed exploding dwarfs just stole material from giant companion stars. But more recently, they’ve begun to suspect that two white dwarfs can also get the job done — if they work together.

Image of the planetary nebula Henize 2-428 from the Very Large Telescope. Credit: ESO

This new result shows that two dwarfs can produce a supernova — or, at least, it will, in 700 million years. The outcome is, however, pretty certain. Right now the stars orbit around each other every 4.2 hours. Objects that massive, dense, close, and fast disturb the spacetime around them, rippling it like two sharks circling each other. They produce gravitational waves, each of which carries away a little bit of energy, causing the dwarfs to drift closer and closer together. Once they’re so close that they crash, they become an “it,” with a total mass will be so large (1.8 times the sun’s) it will collapse in on itself and then explode. The stars in Henize 2-428 will become “a star” briefly in 700 million years, before becoming a blast.

When white dwarfs go supernova — a subset of explosions called Type Ia — they explode with predictable brightness. That has made them useful as so-called standard candles, to help gauge distances in the far-off universe. Because of white dwarfs’ misfortunes, we know how far away other galaxies are, and we know how fast they’re moving away from us. We can then calculate how quickly the universe is expanding, and then how powerful dark energy is. The more we know about how supernovae like the one in Henize 2-428’s, the more standard the candles become. With a known-to-the-Watt brightness, we could tell exactly how far away other galaxies are, and how fast the universe we all live in flies outward.