The study of exoplanets has revolutionized our understanding of how planets are born and evolve. And now, a new theory applies those insights closer to home. 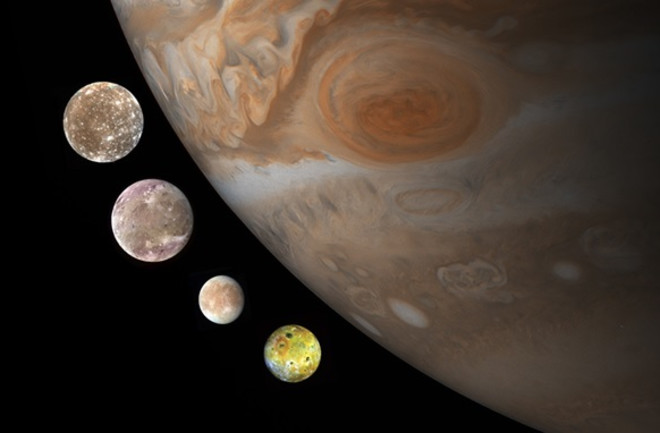 The origins of Jupiter's Galilean moons is a long-standing mystery. But new research suggests a promising pathway for how they may have formed. From bottom to top is Io, Europa, Ganymede, and Callisto. Jupiter is shown to scale on the right. (Credit: Moons: NASA/JPL/Galileo; Jupiter: NASA/JPL/Space Science Institute; Image data processing and layout: Kevin M. Gill)

Using insights gleaned from studying exoplanets, astronomers have developed a new theory that explains the formation of all of Jupiter’s Galilean moons. The team, led by Konstantin Batygin of Caltech, then went on to use the theory to create computer simulations emulating the moons’ formation. The results were promising — to say the least.

As Batygin tells Astronomy, the simulations included one run that was so close to reality that he “had to do a double take.” It was so jarring, he says, “I went on a run to calm down. Came back. And looked at it again.”

The researchers tell a story of how the jovian moons built themselves up — one by one — from tiny motes of icy dust left over from the initial formation of the solar system. Once large enough, each moon then migrated inward, eventually settling into a clockwork-like orbit.

The new research was published May 18 in The Astrophysical Journal.

The Need for a New Theory

Previous attempts to understand the origin of planets and moons were tailored to explain our own solar system. But those theories didn’t work when we tried to apply them to the dizzying array of exoplanetary systems discovered in the last few dozen years.

“The exoplanet revolution over the last two decades has completely rewritten the story of how planets form,” Batygin says. He compares this to becoming a karate master, but then emerging from your dojo and learning about the many other martial arts practiced around the world.

So, based on the most up-to-date exoplanet data, Batygin thinks it might be time to rewrite our understanding of how moons are made.

“The best model up until now of satellite formation is from two decades ago, and things have advanced since then,” he says. “The question of why the icy moons are there is one we know embarrassingly little about.”

To help shed light on the moon mystery, Batygin, along with Alessandro Morbidelli of the Côte d’Azur Observatory, set out to explain how our solar system’s largest planet, Jupiter, got its satellites.

Their new theory paints a picture of a young Jupiter surrounded by an extended disk of gas, called a circumplanetary disk. As material circulated through the solar system in its early years, Batygin says Jupiter’s circumplanetary disk served as a “dust trap” that captured tiny specks of icy matter (about 0.4 inch, or 10 millimeters, wide).

Over time, the amount of icy dust in the disk continued to grow, leading to more and more collisions and mergers between particles. Eventually, countless “satellitesimals” — bodies that are about 62 miles (100 kilometers) wide — began to form. These bodies then continued to further clump together until they eventually grew into the embryo of a full-fledged moon.

As swarms of small fragments interacted while orbiting Jupiter, the circumplanetary disk developed propagating density waves. According to Batygin, this is akin to how the arms of galaxies form, meaning young Jupiter likely had a spiral pattern around it. However, Batygin tells Astronomy that even if Earth had existed at that time (it formed about 90 million years after Jupiter’s moons), the spirals would have been obscured by millions of miles of gas between us. This beautiful high-resolution simulation shows such a disk around the young exoplanet PDS 70 c. (Credit: M. Schulik et al.)

As this first growing satellite orbited within the dusty disk, it would have left a spiral wake in its path. This wake, as well as increased drag from the remaining gas in the disk, steadily pulled the moon closer to Jupiter. Eventually, the newborn moon reached the inner edge of the disk, exited the feeding zone, and, as the paper describes, halted its “migratory trek” inward.

Finally, this same process repeated, leading to the sequential creation of Jupiter’s four Galilean moons, working from inside to out. According to Batygin, Jupiter’s innermost moons — Io and Europa, respectively — formed in only about 6,000 years. Ganymede, the next closest, took about 30,000 years.

However, according to the theory, by the time icy Callisto started to coalesce, the strengthening sun had evaporated much of the gas that was initially in Jupiter’s disk. So, although Callisto reached about half of its final mass in just 50,000 years, it took nearly 9 million years to accumulate the rest.

While elements of this theory have been suggested before, Batygin says their version includes a new understanding of how dust trap work. This, they claim, resolves the longstanding difficulty of accounting for all, not just some, of the matter needed to form the Galilean moons we see today.

The theory also explains how the orbits of Io, Europa, and Ganymede developed their striking orbital resonance, which has fascinated scientists for centuries. For every single orbit outer Ganymede makes, Europa makes two, and innermost Io makes four — returning to their initial setup every 172 hours. According to Batygin, their new theory explains how this relationship could have developed in a stable way: Europa first locks into a pattern with Io, then Ganymede later syncs up with Europa.

Although the team has been working on the theory since 2018, it wasn’t until last year that observations confirmed their logic and calculations.

In 2019, astronomers observing the PDS 70 system, located some 370 light-years away, found the first example of a moon-forming disk circling an exoplanet. And, as Batygin says, “It was far dustier than anyone could have guessed.” The theory was further bolstered by additional observations in 2019 that showed signs of gas circulating through the HD 163296 system, much like the new model predicts.

Searching for exoplanets isn’t just about looking for ET. Another large motivator is that learning about distant worlds can reveal a lot about our own solar system, as well as Earth itself.

For instance, Miki Nakajima, an assistant professor at the University of Rochester, tells Astronomy she believes insights from exoplanets also inspired Batygin’s well-known prediction of Planet Nine, a hypothesized super-Earth lurking in the outer solar system.

“Observations of exoplanet systems have provided us windows to observe events that likely happened in the solar system in the past,” she says, noting that this is motivating scientists to explore new formation mechanisms. “One of the novel parts of this work is to provide a complete history of the moons,” Nakajima says. She doesn’t think it would have been possible to test these ideas without the numerical simulations that exist now.

Jonathan Lunine, a planetary scientist at Cornell University who put forward one of the earlier influential models of how Jupiter’s moons may have formed, tells Astronomy he’s interested in knowing more about the formation of Ganymede and Callisto. Though these two moons are similar in size, they have drastically different geological histories. Lunine says future missions to the moons could take more detailed measurements of their gravitational fields, revealing more about their interiors and providing insights into the differences between the two.

Though the new research focuses specifically on spelling out the history of Jupiter’s icy moons, Batygin believes its concepts could also apply to Saturn, as well as distant gas giant exoplanets. Nakajima, for one, says she would love to see simulations replicating the formation of Saturn’s moons.

And while further developing our understanding of the origins of the solar system’s icy moons could lead in many interesting directions, Batygin says it’s particularly intriguing due to their potential — however unlikely — of hosting extraterrestrial life.

“In terms of what we will learn over the next decade,” he says, “the icy moons will come into remarkably sharp focus.”