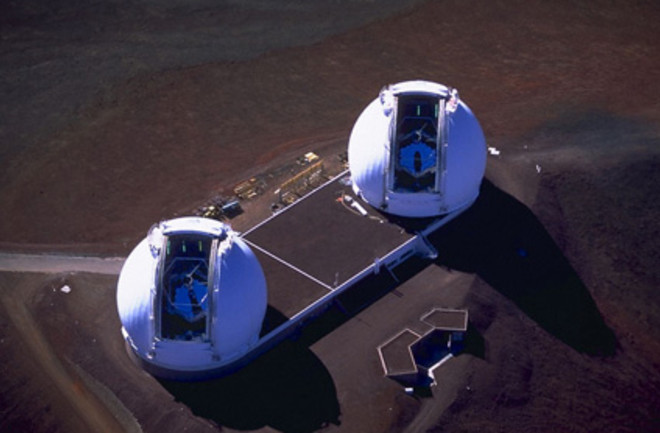 The universe abounds with Earth-sized planets. That hopeful notion has been reinforced by individual planets finds like possible Goldilocks planet Gliese 581g, by the hordes of planet candidates discovered by the Kepler mission, and now, by a census of a small space in the sky that tells us one in four sun-like stars should possess worlds that are close to the size of Earth. Take a moment to think about that: One in four. In Science, exoplanet hunters Geoffrey Marcy and Andrew Howard published their team's census of 166 nearby stars like ours, of which they picked 22 at random to investigate for planets. They watched the stars' doppler shifts to hunt for planets over the last five years, and used the results to extrapolate how common terrestrial planets must be far beyond just this set of stars.

In total, the astronomers detected 33 planets orbiting 22 stars, and the distribution of the planets showed they became more plentiful the lower their mass.... They estimate that 23% of sun-like stars are circled by an Earth-like planet, 12% are orbited by more massive "super-Earths" and around 1.6% are circled by planets similar to the gas giant, Jupiter. [The Guardian]

As is always the difficulty with planet hunting, "Earth-size" is not "Earth-like." So just because there may be a glut of planets about as big as ours, that doesn't mean they look anything like home (and, in fact, Marcy and Howard sampled planets that orbit their stars much closer than the Earth does to the sun).

Their observations and extrapolations say nothing about whether all these Earth-size planets will actually have the characteristics of Earth: its density, its just-right distance from the sun, the fact that it is a rocky structure rather than gaseous ball. But Marcy said that with so many Earth-size planets now expected to be orbiting distant suns - something on the order of 50,000,000,000,000,000,000,000 across the universe - the likelihood is high that many are in "habitable zones" where life can theoretically exist. [Washington Post]

Indeed, the astronomers are working with rough estimates—studying relatively few stars to estimate the planetary distribution of the universe. But just getting in the right ballpark for how many planets like ours are out there is hugely invigorating, Howard says:

“I wouldn’t be surprised if the true number [of stars hosting Earth-mass planets] is one in two, or one in eight — but I’m almost sure it’s not one in 100,” he said. “That’s a really big improvement on our knowledge.” [Wired.com]

Discovery News says MIT's Brice-Olivier Demory is wary of such a major extrapolation this early, but soon this won't be the only star census trying to coax out the terrestrial planet answer.

More information will be coming soon. A Geneva-based team of planet-hunters has made preliminary assessments that 30 percent to 50 percent of its surveyed stars have planets. And scientists using NASA's Kepler space telescope, which is on the hunt for Earth-sized worlds, has yet to weigh in. [Discovery News]

It's hard to stay patient with so many worlds waiting to be found. In February, the scientists behind the Kepler mission will unveil the data they've been studying in secret for months, trying to sort out which of the planetary candidates their telescope has spotted are truly new worlds and not statistical errors. Kepler's early results

turned up the same thing as Marcy and Howard's survey, that terrestrial planets are far more common than gas giants. And the February data set should contain a major batch of new, small worlds. While humanity's first 15 years of turning up exoplanets

has caught the low-hanging fruit—all those hot Jupiters and super-Earths—there are countless Earth-sized worlds on the cusp of discovery. Related Content: 80beats: Um... That "Goldilocks" Exoplanet May Not Exist

Discoblog: So, How Long Would It Take to Travel to That Exciting New Exoplanet?