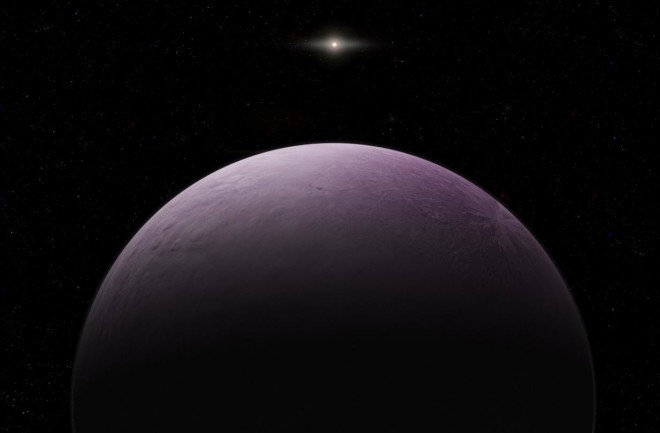 An artist's visualization of the newly discovered dwarf planet 2018 VG18, or "Farout," with our sun in the background. (Credit: Roberto Molar Candanosa/Carnegie Institution for Science)

An ambitious team of astronomers has discovered the most “far out” object ever observed in our Solar System. The object, a pink dwarf planet called 2018 VG18 and nicknamed “Farout,” lies more than 100 times further from the sun than the Earth is.

This discovery, made by Carnegie’s Scott S. Sheppard, the University of Hawaii’s David Tholen and Northern Arizona University’s Chad Trujillo, was formally announced today (Dec. 17) by the International Astronomical Union’s Minor Planet Center. Farout is about 120 AU away — 1 AU is the distance between the Earth and the Sun — making it the first object discovered at over 100 AU. Farout is significantly farther than the now second most-distant object Eris, which is at about 96 AU. The pink dwarf planet is more than three-and-a-half times more distant than the famous, blue dwarf planet Pluto.

It’s not hard to figure out where the nickname comes from. But, according to Sheppard, it has a double meaning. In addition to Farout being so distant, Sheppard said that when he first saw the planet he shouted out loud: “far out!”

The team discovered Farout using the Japanese Subaru 8-meter telescope located in Hawaii. The first discovery images were taken Nov. 10, 2018. The object was observed a second time earlier this month at the Magellan telescope at Carnegie’s Las Campanas Observatory in Chile. These secondary observations allowed the team to follow the object’s path across the sky and determine its brightness and color.

From these observations, the team found that dwarf planet is fairly sizable, about 310 miles (500 km) in diameter or roughly 1/3 the size of Pluto, Sheppard said. The dwarf planet also has a pinkish hue likely caused by the object being rich in ice.

While a significant discovery on its own, finding Farout might also support the search for “Planet X” — a theoretical planet whose existence was first proposed by this same research team after discovering another distant solar system object.

Farout and other distant bodies seem to move in a strange harmony best explained by the existence of an as-yet-unseen massive planet beyond Neptune in the Solar System. But it will be at least a year, and likely more, before researchers understand Farout’s orbit enough to say if it actually provides evidence for Planet X.

While the team’s main focus is looking for Planet X, they continue to keep their eyes peeled for other objects in the same general vicinity. Farout is one such unexpected prize from the the search. Another, “The Goblin” was found earlier this year by the same team.

Further study of our system’s outer edge, along with the likely discovery of more objects like Farout, will continue to inform the search for Planet X. “We’ve started searching as much sky as we can,” Sheppard said. “We hope to find a few more of these in the future.”