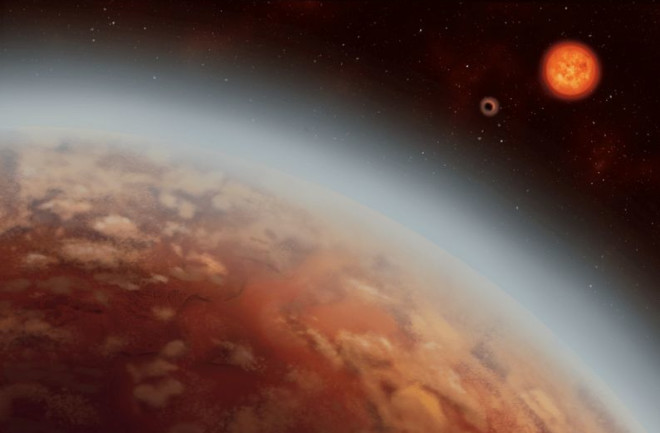 The watery exoplanet K2-18 b is surrounded by water vapor in this artist’s illustration. (Credit: Alex Boersma)

Astronomers have finally uncovered water vapor in the atmosphere of a super-Earth exoplanet orbiting within the habitable zone of its star. The find means that liquid water could also exist on the rocky world’s surface, potentially even forming a global ocean.

The discovery, made with NASA’s Hubble Space Telescope, serves as the first detection of water vapor in the atmosphere of such a planet. And because the planet, dubbed K2-18 b, likely sports a temperature similar to Earth, the newfound water vapor makes the world one of the most promising candidates for follow-up studies with next-generation space telescopes.

“This is the only planet right now that we know outside the solar system that has the correct temperature to support water, it has an atmosphere, and it has water in it, making this planet the best candidate for habitability that we know right now,” lead author Angelos Tsiaras, an astronomer at University College London, said in a press conference.

Planet K2-18 b sits some 110 light-years away in the constellation Leo, and it orbits a rather small red dwarf star that’s roughly one-third the mass of our own Sun. Red dwarfs are infamous for being active stars that emit powerful flares, but the researchers point out that this particular star appears to be surprisingly docile.

This bodes well for the water-bearing planet, as its 33-day orbit brings it about twice as close to its star as Mercury is to the Sun. “Given that the star is much cooler than the Sun, in the end, the planet is receiving similar radiation to the Earth,” said Tsiaras. “And based on calculations, the temperature of the planet is also similar to the temperature of the Earth.”

Although K2-18 b flaunts some of the most Earth-like features observed in an exoplanet so far — water, habitable temperatures, and a rocky surface — the researchers point out the world is still far from Earth-like. First off, K2-18 b is roughly twice the diameter of Earth, which makes it about eight times as massive. This puts K2-18 b near the upper limit of what we call a super-Earth — which typically refers to planets between about one and 10 Earth masses.

But the density of K2-18 b is what really cements it as a rocky planet. With a density about twice that of Neptune, K2-18 b has a composition most similar to Mars or the Moon. So, because the planet is believed to have a solid surface, and it’s known to have an extended atmosphere with at least some water vapor, researchers say it’s feasible that K2-18 b could actually be a water world with a global ocean covering its entire surface.

However, they cannot say for sure.

The uncertainty is because Hubble can’t probe the atmospheres of distant exoplanets in great detail. For instance, thanks to a sophisticated algorithm, the researchers were able to tease out the undeniable signal of water vapor in the atmosphere of K2-18 b, But they couldn’t tell exactly how much water vapor is really there. So, in their paper, they took the conservative approach and gave a broad-range estimate for the abundance of water — somewhere between 0.01 percent and 50 percent.

In order to pin down exactly how much water is really on K2-18 b, the researchers say we’ll have to wait for the next generation of advanced space telescopes to come online. Specifically, NASA’s James Webb Space Telescope, scheduled for launch in 2021, and the European Space Agency’s Atmospheric Remote-sensing Infrared Exoplanet Large survey (ARIEL) telescope, planned for launch in the late 2020s, are perfectly suited for the challenge.

The new research was published September 11 in Nature Astronomy. A preprint of the study is available at arXiv.org.