This quiet black hole sits just 1,000 light-years from Earth. But the two stars that dance around it are possible to pick out with the naked eye. 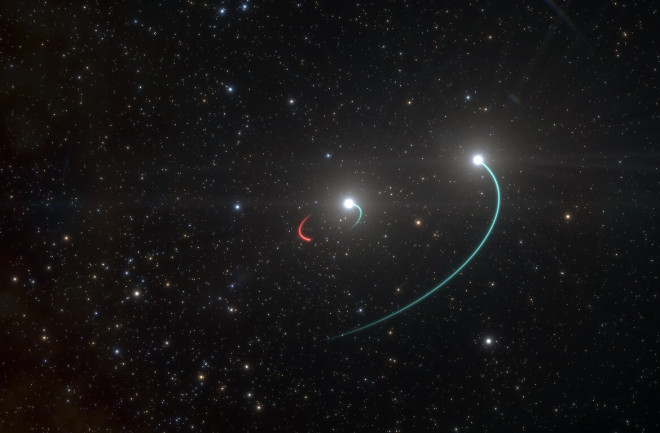 This system HR 6819, located about 1,000 light-years from Earth, contains two stars that orbit a hidden black hole several times larger than our sun. Astronomers expect that hundreds of millions of these “quiet” black holes sit undiscovered in our galaxy. (Credit: ESO/L. Calçada)

Astronomers have discovered a black hole hiding closer to Earth than any found before it. Located about 1,000 light-years away in the constellation Telescopium, the black hole weighs in at some four times the mass of our sun, which means it’s only about 7.5 miles wide.

A team of researchers identified the black hole while tracking binary stars using a telescope at La Silla Observatory in Chile. When they looked at a double star system called HR 6819, they noticed that the inner star orbits quickly, while the outer star slowly chugs along.

This meant the stars are not just circling each other. Some unseen third object has to be located near the center of the system. The hidden object and the inner star dance around each other every 40 days. Meanwhile, the outer star slowly circles the pair much farther out. And because the invisible object is at least four times the mass of the sun, it can only be a black hole, the astronomers say.

Because black holes try not to betray themselves, finding a quiet one that is not actively devouring a neighbor is difficult. But even without emitting light themselves, the gravitational effects black holes have on other visible objects can be very revealing. For instance, on a dark, clear night in the Southern Hemisphere, you can actually see the two stars that orbit the black hole in HR 6819 with your naked eye.

“We were totally surprised when we realized that this is the first stellar system with a black hole that can be seen with the unaided eye,” study co-author Petr Hadrava said in a media statement.

Black holes form when very large stars collapse at the ends of their lives. And while they may seem exotic to us, cosmically speaking, these stellar-mass black holes should be extremely commonplace.

Scientists expect our Milky Way galaxy should hold hundreds of millions of them. Yet, so far, just dozens have been discovered.

The stellar-mass black holes that astronomers have discovered were only found because they were acting like cosmic lighthouses, shooting off X-rays as they violently consumed things like gas and stars. But these extreme objects are actually not representative of what astronomers expect to be out there. There should be a silent majority of black holes quietly lurking, not eating anything. Though HR 6819 is one of just a few covert black holes ever found, there should be countless more just like it.

“This is really only the tip of the iceberg,” said study co-author Marianne Heida, an astronomer with the European Southern Observatory.

And as astronomers seek out more and more hiding black holes, they expect to find them closer and closer to Earth. Hadrava estimates there should be black holes within a few dozen light-years of Earth, which would put them closer than some of the brightest stars in our night sky.

In comparison, the previous record holder for closest black hole is V616 Monocerotis, which is nestled in a binary system more than 3,000 light-years away.

“Just looking at the number of black holes that we expect in the Milky Way, I would be very surprised if there aren’t a few of them still closer by than HR 6819,” Heida said.

Putting Theories to the Test

Discovering these black holes isn’t just about cataloging objects, either. Researchers need to find them to test their theories of how stars both live and die.

“Astronomers have a pretty good idea of stellar evolution in general, but the details are not quite settled yet, especially when it comes to the most massive stars that leave behind black holes,” said Heida.

Scientists are also still uncertain how living in a system with multiple large members affects the evolution of the stars within. “Those aspects are actually really important because massive stars produce [and release] all the elements in the universe other than hydrogen and helium,” she added. “And pretty much all of them are in systems with multiple stars.”

Another surprising unknown is that astronomers don’t understand exactly how supernova explosions work. But because some supernovas can produce black holes, one way to test competing theories is to compare the number and sizes of known black holes to what various supernova theories predict. So, the more examples they add to the currently small list, the more accurately they can test whether they’re right.

HR 6819 likely started its life as a triple star system before the third star collapsed into the black hole it is today. And though no planets are known in the system, if you were to visit a world circling the inner star, you’d be treated to a mysterious sight.

On Earth, a solar eclipse happens when the moon passes between us and our home star. On a hypothetical planet orbiting the inner star in HR 6819, the black hole would occasionally eclipse the outermost star. But instead of blocking out the outer star’s light, the black hole would act as a magnifying glass. It would create what astronomers call a gravitational lens in the planet’s night sky. Viewers of this bizarre eclipse would see a magnified glowing disk surrounded by a pitch-black ring.

The same pattern would appear if the black hole passed in front of a bright background star. The rest of the time, the black hole would only be seen when it consumed some stray bit of gas or a space rock. “Otherwise, the black hole should be black and invisible,” said study co-author Dietrich Baade, an astronomer at the European Southern Observatory.

An artist’s illustration of a black hole. (Credit: NASA/ESA and G. Bacon, STScI)

The awe-inducing arrangement of HR 6819 isn’t unique, though. Systems with multiple stars account for most of the stars in our galaxy. So by looking for more peculiar orbits within these systems, astronomers should be able to uncover more hidden black holes.

However, that would still leave a large number of black holes impossible to detect with current methods. Astronomers think that the violent events that give birth to black holes — supernovas — also gives their stellar partners a gravitational kick that flings them into space. And without being able to see how things orbit around it, it’s currently impossible to detect a lone black hole. So, for the foreseeable future, astronomers must continue searching multiple star systems to find these muted monsters.

“We need to come up with clever ways to search for [black holes] in the vast amount of data that is already available,” Heida said.

She expects more evidence for quiet black holes is probably waiting to be found in archived observations. And projects like the European Space Agency’s Gaia spacecraft, which is currently working to map a billion stars, should uncover even more. The Vera C. Rubin Observatory under construction in Chile — previously known as Large Synoptic Survey Telescope — will photograph the entire visible sky every few nights, unlocking a windfall of data on nearby star systems.

Read More: Tour 10 of the Closest Black Holes to Earth