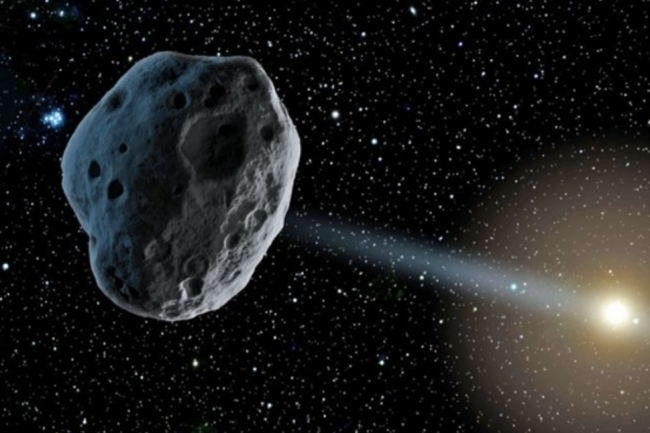 New research suggests the asteroid 2015 BZ509 may have originally traveled to the solar system from another star. (Credit: NASA/JPL)

Less than a year ago, astronomers discovered ‘Oumuamua, the first known object from another star system to pass through our own. Now, in a new study published today in the Monthly Notices of the Royal Astronomical Society: Letters, astronomers announced the discovery of the first interstellar object known to have taken up permanent residence around the Sun.

Astronomers first discovered the asteroid in question, which has the succinct name (413107) 2015 BZ509 (or Bee-Zed for short), back in 2015 using the Panoramic Survey Telescope and Rapid Response System (Pan-STARRS). Though the initial discovery team noticed Bee-Zed had a very peculiar, yet stable orbit — it shares a nearly perfect one-to-one resonance with Jupiter, but travels in the opposite direction — they were unable to explain why the asteroid has this ‘retrograde’ motion.

“How the asteroid came to move in this way while sharing Jupiter’s orbit has until now been a mystery,” said Fathi Namouni, the study’s lead author, in a press release. “If 2015 BZ509 were a native of our system, it should have had the same original direction as all of the other planets and asteroids, inherited from the cloud of gas and dust that formed them.”

Planets and smaller sub-planetary objects are thought to form out of a dense disk of debris that encircles a newly formed star, called a protoplanetary disk. The material that makes up this disk is mainly gas and dust that was too loosely held to be incorporated into the star, but it’s still spinning in the same direction that the star spins. Over time, that disk of protoplanetary material begins to coalesce, ultimately forming a handful of planets, numerous moons, and countless asteroids and comets. However, all of these objects continue to travel in the same direction unless they are kicked out of their orbits through collisions, which does not seem to be the case for Bee-Zed.

The key insight of the new study comes from simulations the team ran that rewound Bee-Zed’s motion back 4.5 billion years, to an era when the planets were just finishing forming around the Sun. By using the simulations to trace Bee-Zed’s orbital evolution over huge swaths of time, the researchers showed that the asteroid has always moved in its current, perfectly choreographed orbit that nearly mirrors Jupiter. Therefore, Bee-Zed could not have formed from the co-orbiting disk of debris that surrounded the Sun during its planet-forming phase.

So, if it is not from this solar system, the researchers argue, then it must be from another star system, one that likely formed in the same stellar nursery as the Sun. “Asteroid immigration from other star systems occurs because the Sun initially formed in a tightly-packed star cluster, where every star had its own system of planets and asteroids,” said team member Helana Morais, in the press release. “The close proximity of the stars, aided by the gravitational forces of the planets, help these systems attract, remove, and capture asteroids from one another.”

Is the Sun Special?

One of the most tantalizing off-shoots of this new discovery is the potential of future research to investigate how the Sun is similar — and more importantly, different — from its ancient siblings. If asteroid Bee-Zed is confirmed to originate from outside of the solar system, then it most likely came from a star system that was forged in the same star-forming cluster as the Sun. This means that astronomers can dissect the composition of Bee-Zed (either through spectroscopic analysis, or even a sample-return mission) to learn how it is chemically distinct from objects forged within our own solar system.

Furthermore, if astronomers can determine exactly which star system the asteroid initially came from, they may be able to learn how the Sun and Bee-Zed’s host star interacted in the distant past. This would teach us a great deal about the Sun’s early path to independence, helping us piece together our own cosmic origin story.

The Hunt for Hazardous Asteroids Continues, Even After Most Telescopes Have Closed