Astronomers Draw Ever Closer to Finding a Nearly Earth Object 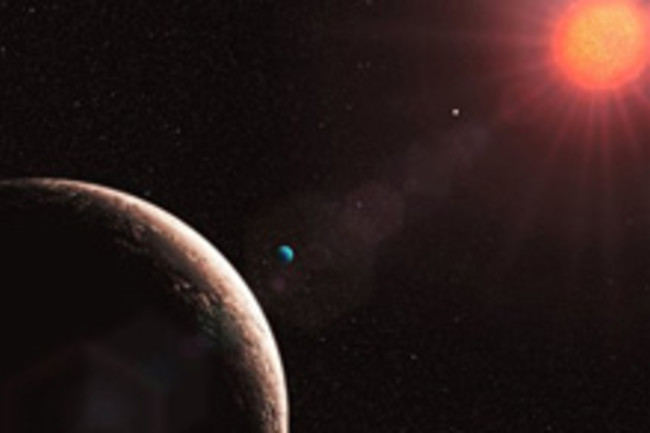 Astronomers still haven't discovered Earth's twin orbiting another star out in the cosmos, but they're beginning to find worlds with a passing resemblance to our own. New studies of the red dwarf star Gliese 581 have revealed a small, rocky exoplanet with only twice the mass of Earth, and have also shed new light on a larger planet orbiting farther out, which researchers now say could have liquid water. Team member Stephane Udry believes that the larger planet could have

a "large and deep" ocean. "It is the first serious 'water-world' candidate," Udry said [AP].

Researchers had previously discovered three planets orbiting the star, including the potential water world, Gliese 581 d. Based on earlier observations, researchers thought that the planet took 83 days to orbit its star, which would indicate that the planet was too far from the red dwarf's weak heat to have liquid water. But more extensive observations have shown that the planet actually has an orbital period of 66 days, putting the planet just inside the star's "habitable zone." Lead researcher Michel Mayor says the planet may be warm enough to bear oceans that are thousands of miles deep.

"Maybe this is the first of a new class of ocean planets. That is my favourite interpretation," says Mayor. "Whether there is life or not, I don't know" [New Scientist].

However, not everyone is convinced that Gliese 581 d is wet and wild. Other experts say it's more likely to be an ice giant, like Neptune and Uranus. The new studies of Gliese 581, which lies only 20 light-years away from Earth, were conducted using a Chilean telescope that

measures the wobble in a star's orbit caused by the pull of its orbiting planets. These fluctuations are tiny, but show up as changes in the star's spectrum [Nature News].

The new planet discovered, named Gliese 581 e, is the lightest planet ever spotted, with an estimated mass just 1.9 times that of Earth.

"At the beginning, we discovered Jupiter-like planets several hundred times the mass of the Earth; and now we have the sensitivity with new instruments to detect very small planets very close to that of the Earth" [BBC News]

, says Mayor. Another contender for "most Earth-like planet" was announced in February; that planet, named Exo-7b, has a radius about 1.7 times that of Earth, but researchers were unable to determine its mass. While Gliese 581 e is too hot to support life as we know it (it takes just three days to orbit its star), the discovery suggests to researchers that small, rocky planets like our own may be quite common. Exoplanet hunter Geoff Marcy says that

"it shows that nature makes such small planets, probably in large numbers..... Surely the galaxy contains tens of billions of planets like the small, Earth-mass one announced here" [AP].

The findings were announced at a meeting for the European Week of Astronomy and Space Science. Related Content: 80beats: Small, Rocky Exoplanet Is the Most Earth-Like World Ever Seen 80beats: First Ever Weather Report From an Exoplanet: Highs of 2240 Degrees DISCOVER: How Long Until We Find a Second Earth? DISCOVER: The Man Who Made Stars and PlanetsImage: European Space Agency