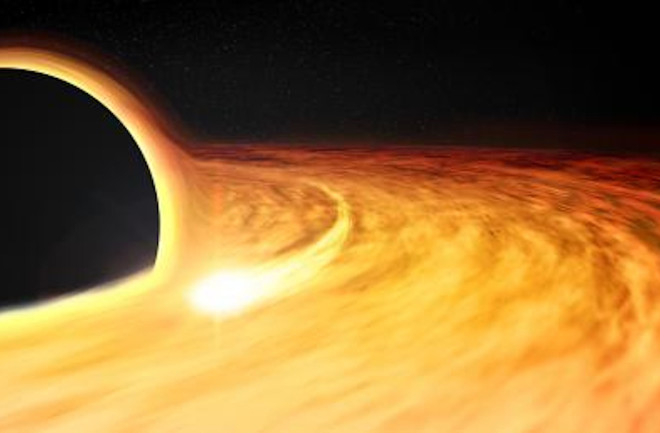 Black holes are massive beasts that annihilate anything that dares to cross them. We don’t know a whole lot about these invisible, terrifying bodies, but astronomers have found a new way to study their mysterious behavior.

By observing the X-rays blasting from a star torn apart by a black hole, a team of researchers were able to calculate how fast the black hole spins — clocking it at nearly 50 percent the speed of light. This marks the first time that astronomers used X-rays, which orbit the black hole every 131 seconds, to calculate its incredible speed. The research, which could help correlate a black hole’s age with its speed, was published today in the journal Science.

The discovery dates back to November 2014, when astronomers were observing a galaxy 300 million light years from Earth. They saw the galaxy’s central, supermassive black hole lure in and rip apart a passing star. Known as a tidal disruption flare, this event created a blast of X-ray radiation that was strong enough to be seen from Earth. Since black holes don’t emit many X-rays on their own, a group of researchers decided to home in on the event.

And luckily for them, various space telescopes started measuring the black hole’s X-ray emissions after the flare was spotted. After combing through their data, the MIT-led team noticed a peculiar trend. They found that bursts of X-rays were appearing once every 131 seconds near the black hole’s event horizon — the point where it starts to swallow up material. These periodic emissions, which persisted for over 450 days, boosted the black hole’s total X-rays emissions by 40 percent.

The team thinks that these powerful radiation bursts are actually caused by two stars instead of one. The original sighting in 2014 still holds up: a black hole lured in a passing star and tore it to pieces. Some of these stellar shreds, which emit massive amounts of X-ray radiation, were sucked into the back hole. Others, though, remained in the innermost stable circular orbit (ISCO) — the closest spot where objects can orbit a black hole without being devoured by it.

In that dangerously close orbit lies another star, thought to be a tiny, dense white dwarf. Researchers think that the dwarf’s gravity pulled in the bright stellar remnants, creating a halo of X-rays around it. These X-rays can be seen every time the star orbits the black hole, which is once every 131 seconds.

“That’s not super fast — there are other black holes with spins estimated to be near 99 percent the speed of light,” said Dheeraj Pasham, a postdoctoral fellow at MIT and lead author of the paper, in a media release. “But this is the first time we’re able to use tidal disruption flares to constrain the spins of supermassive black holes.”

These events only emit X-rays for a few hundred years, so the odds of witnessing one is incredibly rare. Even so, the researchers plan to search for more flare events around both younger and older black holes. By comparing the speeds of black holes at various ages, researchers can determine if they get faster and grow more powerful over time. These stats could shed light on their mysterious evolutions, plus reveal how they feed on a galaxy’s stars.